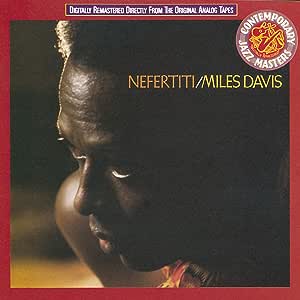 J. McDonald
5つ星のうち5.0 Nefertiti.
2020年3月7日に英国でレビュー済み
Amazonで購入
“Nefertiti” may not be one of the landmark albums of Miles` career, but it is nevertheless a classic from the second great quintet, their fourth album.
It's fair to say that during this period there was plenty of experimentation and innovation on all the quintet albums, which virtually came to define the whole idea of post-bop modern jazz; this one is the last totally acoustic recording made by the group – the next LP would be “Miles in the Sky” which clearly contained rock elements.
This CD edition of the album has the addition of alternative takes not issued on the original LP so it greatly rounds out the group creative process for the astute listener.
This is just great music – I don't feel the need to elaborate on that – if you are looking at this album with a view to purchase you are likely to already know what you're getting into and the sound samples above will seal the deal in that respect.
A fine album in the Davis discography featuring some of his greatest side men – Shorter, Williams and Hancock all provided the compositions on this recording.
An unreserved five star recommendation – the CD has a total running time of just over 66 minutes.
続きを読む
3人のお客様がこれが役に立ったと考えています
違反を報告
レビュー を日本語に翻訳する

Mr Bee
5つ星のうち4.0 An album of great subtlety
2020年10月21日に英国でレビュー済み
Amazonで購入
Miles’ last wholly acoustic album. In many ways it’s an album of great subtlety lacking the melodic hook of the great 50s albums, or the groove of the later electric albums. The title track is famous for the frontline playing an almost unchanging motif whilst drummer Tony Williams explores ideas behind with continuous variation... there’s some varied interest in the piano and bass but mostly it’s the drums to listen to. That’s the albums strength but also it’s weakness, it needs careful listening to appreciate, and fails as mood music if left to play in the background.
There are four alternate takes as bonus tracks.
続きを読む
違反を報告
レビュー を日本語に翻訳する

Ian Thumwood
5つ星のうち5.0 More musical gold from Miles' Second Quintet
2012年4月15日に英国でレビュー済み
Amazonで購入
"Nefertiti" was Miles Davis' follow-up record to "Miles Smiles" which was itself perhaps the greatest or ar least one of the very best jazz album of the 1960's. Even though the line up of the trumpeter, Wayne Shorter, Herbie Hancock and Tony Williams consistuted the greatest band in the history of jazz, "Miles Smiles" seems the summit of the studio recordings of the second quintet and , on first listen, "Nefertiti" lacks the free-wheeling explosive nature of the previous record. For me, the title track sees the band depart for new territory with Shorter's theme being performed chorus after chorus in varying intervals and dynamics but with the creativity being left to the ever-brilliant Hancock's choice set of chords and the massed battery of Williams' drums. Whilst played brisker than other versions, this "straight" performance pointed the way for bands in the 1980's to perform heads but the real meat in the recording doesn't take place until everyone is unleashed to take full length solos. So although "Nefertiti" may have sounded fresh and original in 1967, this kind of arrangement sounds less novel these days. It always seems an odd choice for an opener to an album.

The disc very much takes off with the wonderfully whistful "Fall" which was also composed by Shorter with the following tracks "Hand jive", "Riot" and "Madness" effectively continuing where "Miles Smiles" left off with some blisteringly exciting free-ish playing all under-pinned by the furious drumming of Tony Williams which is the stand out feature throughout this record. Williams is simply immense on this CD. The "official" record concludes with another Shorter composition "Pinocchio" which is the most catchy theme on the whole record and has the most orthodox swing feel about it.

Having explored Davis' recording career from his days with Charlie Parker through to the electonic efforts where the leader's trumpet was cut and pasted into Marcus Miller's aural landscape, I would safely say that the second quintet features the hardest swinging and most uninhibited playing Davis ever put down on record. The looseness of the rhythm that was laid down by Williams and under-pinned by the ever -resourceful and creative bass playing of the wonderful Ron Carter could not but have helped being anything other than inspirational. As ever, Herbie Hancock demonstrates that he is by far the greatest pianist in jazz when it comes to laying down rich and colourful harmonies behind a soloist. He is also incapable of playing a phrase in his solos which doesn't swing with the hardest degree of intensity. Although there is plenty produced by all five musicians on these Quintet records to merit repeated listening, it is always Hancock who astounds with the shear originality and creativity of his ideas. I love his playing more than any other pianist's. I would also have to say that the idiosyncrities of Wayne Shorter's tenor provided the ideal foil for Davis.

Unfortunately, there is a small caveat with this issue. Despite the unreserved praise for the "official" takes, this disc also includes a number of takes that were rejected at the time. Although the arrangement of "Pinocchio" is almost transformed by taking the tune at a different pace, by and large it is easy to see why these takes were not chosen and regretfully they take the shine off what was initially a perfect album. These rejected alternatives are merely "good" and lack the greatness of the ones that were eventually chosen. (Oddly, "Miles Smiles" solely consists of first takes and the band must have been fired up when it recorded in the studio that day.) Sometimes it is best that these rejected takes remain in the vault as in this instance they show that not everything they produced in the studio was turned to gold.

Other than this reservation, the "official" takes are exceptional pieces of music making by one of the defining groups in the history of 20th century music and not just jazz. An essential purchase and of equal stature to "Sorcerer" if not repeating the magnificance of "Miles Smiles."
続きを読む
14人のお客様がこれが役に立ったと考えています
違反を報告
レビュー を日本語に翻訳する

D J F
5つ星のうち5.0 Masterclass Throughout
2015年1月7日に英国でレビュー済み
Amazonで購入
The Second Great Quintet's 4th studio album comes from 1968 and sees experimentation right from the off with the title track appearing to anyone casually listening to feature unusually stilted trumpet and saxophone performances. That is, until you really listen to the track and hear what is going on underneath. Always one to innovate, it's the usual underpinning piano, drums and double bass that are improvising rather than playing their more usual role. The album's original six tracks all rip along at a pace, in a style retrospectively defined as post-bop. Wayne Shorter shines on "Fall" and "Hand Jive" in particular, but holding the album together is the incredible drumming of Tony Williams who is on fire throughout.

The original album is supplemented by four alternative versions, two of "Hand Jive", with the second especially a driving force majeure; "Madness" giving up some of the band's working method in studio when contrasted with the master take; and "Pinocchio" taken at a much faster pace. They are all worthy of inclusion, but then pretty much everything this Quartet touched turned to Gold. This is the last completely acoustic album from Miles before the electric experimentation started, and a masterclass throughout.
続きを読む
3人のお客様がこれが役に立ったと考えています
違反を報告
レビュー を日本語に翻訳する