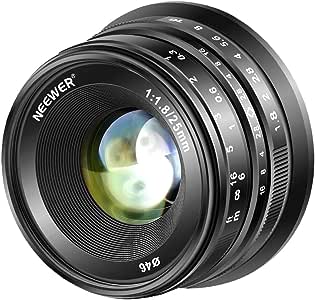 stigweard
5つ星のうち4.0 Capable optics, so-so build
2019年9月1日に英国でレビュー済み
サイズ: Fuji用Amazonで購入
The neewer 25mm f/1.8 seems to be identical to the 7 artisans 25mm. Loads cheaper though. And if you've read any reviews of the latter they hold true for this lens too, presumably.

The bad: the vignetting wide open is quite obvious (near 5.6 before gone), it's soft at the extreme corners, focus goes way beyond infinity, there's a tiny bit of dust ingress, it's flare prone (use a hood if it's not the look you want), the clickless aperture ring is imprecise, apertures at the narrow end are just a couple of microns between f/8 and 22, and focus ring grinds a bit in places.

The build quality on this lens type seems generally poorer than the Meike 35mm, which is actually nicely made by comparison. I should really have bought the Meike 25mm version to complement my Meike 35mm, but I wanted to give something different a try, and this was just so darn cheap at under fifty quid.

Anyway what's it like? For the cash, great. The dust ingress thing is mildly annoying but optically of little significance. Mine was fine initially then a day or two in, I noticed a speck. I imagine more will follow. It may never be one of those 30 year old lenses that are still great today.

Focal length is perfect for me. You can easily use it for scenic or portrait work. I'm more "street", and this works really well in this context too. I should probably add that I use this on a Fuji X-E2. Focus peaking is on. So manual focusing is no problem. In fact I think it slows me down and makes me a better photographer. Those shooting action might struggle though! I've had good success pre focusing and just leaving on f/8 for street.

Sharpeness can be very good indeed when stopped down a little. F8 is optimal. But I'd happily user it wide open too as any vignetting, if unwanted, is really easy to remove in apps like Snapseed (I only use my phone to process shots now, mainly VSCO and Snapseed). You can get massive bokeh balls too, if that's your thing, due to the ridiculously close focus distance and wide aperture combo.

For what I photograph, this will do just fine. And I won't need to baby it either as it's so cheap.
続きを読む

Sydney
5つ星のうち4.0 Brilliant value
2019年3月18日に英国でレビュー済み
サイズ: Fuji用Amazonで購入
This is the second one of these I have purchased. the first was immediately returned due to particle inside the lens and a large mark on the glass.
it is obviously of lower quality than a native Fuji lens but for this price you would be unwise to expect it to be as good. Having said that, the lens feels of reasonable build quality and is lots of fun to use.
The reasons I bought it were-
-to have a more compact lens to keep on my second body.
-reasonably good maximum aperture (it claims 1.8)
-close minimum focus distance (it claims 18cm- haven't checked but am satisfied that it is around this)
-acceptable sharpness (I am not aiming to take award winning landscape shots with this but I have no issues with its sharpness for my useage)

Ibraar
5つ星のうち2.0 good for video - bad for stills - but focus and aperture rings make grinding noises when turned
2019年11月30日に英国でレビュー済み
Amazonで購入
This was a massive disappointment - I bought this for video as it has a clickless Aperture dia, compact, metal, decent lens speed and MF.
For use on an Olympus OMD EM5 II.

It's metal and compact - 50mm equiv.
The lens is good for video - it is prone to flare and can be used creatively - I would've kept this but unfortunately the Aperture dial and Focus ring both weren't well damped and both made a slight gritty noise - such noises are picked up.

The lens is NOT good for stills - has a colour cast and is very soft.

Francis Fitzgerald
5つ星のうち5.0 Less than 50 quid for a superb manual prime.
2019年5月22日に英国でレビュー済み
サイズ: Fuji用Amazonで購入
Not used much yet other than to test. Tested by shooting at 90 degrees to a flat wall- The IQ is sharp wide open, very slight softening at the far edges, but no worse than kit lens (which wouldn't open to 1.8 anyway). Excellent all the way at f4. Also wide open it produces lovely creamy out of focus areas in front of and behind a narrow plane in sharp focus when tested on a perspective view. Nice bokeh. Manual focussing is a breeze with Fuji peak image focussing assist,and feels nicer and more responsive than manual focussing on a fuji lens, which is still controlled via electronics rather than mechanically direct from the focussing ring. The Fuji 23mm f1.4 and f2 cost around £800 and £400 respectively. I haven't used ether of these lenses to compare, but more than happy with the £48 Neewer for my needs and budget.
続きを読む
3人のお客様がこれが役に立ったと考えています
役に立った
フィードバックを送信中...
フィードバックをお寄せいただきありがとうございます。
申し訳ありませんが、お客様の投票の記録に失敗しました。もう一度試してください。
違反を報告
レビュー を日本語に翻訳する

Nafenic
5つ星のうち4.0 Excellent for the money
2020年1月6日に英国でレビュー済み
サイズ: Fuji用Amazonで購入早期レビュー取得プログラム(詳細)
Having been tempted by the new range of Fuji cameras lately, thought I would try them out, buying one of the cheaper models to see how I get on. The main problem with trying a new camera system is that you do not get to try it to its full potential with only the kit lens. Although it would be nice if I could afford to buy more lenses, I do a lot of 'street', candid and low light/night photography, and therefore wide aperture prime lenses are always my first choice. When I saw this lens on Amazon I felt I had little to lose for the money, especially when compared to the Fuji own brand lenses.
I personally like manual focus, and peaking certainly helps make this easier. Although I need to get use to the size and dimensions of this new equipment, it is serving my needs well so far. My included photos are part of a star trail set and hopefully shows how much easier it is to get focus in situations like this. If you need or prefer fast AF the this lens is not for you, but if you can take your time to get the focus right then this could be a real asset for a small price.
続きを読む

Watchman
5つ星のうち3.0 Poor alignement of markings.
2019年6月25日に英国でレビュー済み
サイズ: Fuji用Amazonで購入
The image quality was average but more important was the lens did not focus on infinity as the lens barrel did not turn to infinity in full. Apparently a common manufacture problem.
The price of this lens is slowly creeping up, and you can get the Fuji XF 27mm pancake for as low as £120 if you shop around, and this is for new!
続きを読む
2人のお客様がこれが役に立ったと考えています
役に立った
フィードバックを送信中...
フィードバックをお寄せいただきありがとうございます。
申し訳ありませんが、お客様の投票の記録に失敗しました。もう一度試してください。
違反を報告
レビュー を日本語に翻訳する

M A
5つ星のうち4.0 Cheap and cheerful
2019年10月4日に英国でレビュー済み
サイズ: Sony用Amazonで購入早期レビュー取得プログラム(詳細)
It feels like a quality product, built well. No autofocus can be a pain but I think it's helping me not rely on the tech all the time. High quality images. Great pocket prime lense.
続きを読む
1人のお客様がこれが役に立ったと考えています
役に立った
フィードバックを送信中...
フィードバックをお寄せいただきありがとうございます。
申し訳ありませんが、お客様の投票の記録に失敗しました。もう一度試してください。
違反を報告
レビュー を日本語に翻訳する