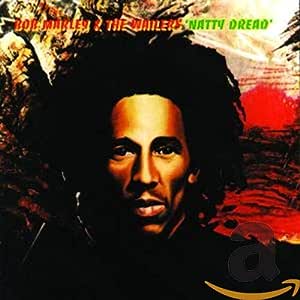 Natty Dread captures Bob Marley's decisive transition from Wailers band member to auteur, his singing and writing now front and center, and the revamped band securely reined in to his defiant, Rastafarian worldview. This 1974 release mirrors the lineup's more sinewy sound, carved by Al Anderson's spidery guitar fills, Touter's telegraphic keyboard, the I-Threes' female vocal choruses and vamping horns--a potent brew that bubbles under his then most openly political songs. A position paper on the daunting ghetto realities of Jamaica's Trenchtown, the album reels off a series of enduring Marley classics and kicks off with the giddy, sexy reggae anthem, "Lively Up Yourself," with its hilarious but mysterious spoken fadeout ("What you got in dat bag, dere?"). It continues with the uplifting pep talk in "No Woman No Cry," the grim dispatches of "Them Belly Full (But We Hungry)" and "Rebel Music (3 O'Clock Roadblock)," as well as the exhortations of the title song and "Revolution." Marley's own dreadlocks were still just growing in then, but this is nonetheless fully matured, riveting reggae at its most focused, righteous, and rhythmically irresistible. --Sam Sutherland

The Punk Panther
5つ星のうち4.0 So Jah seh....
2018年6月18日に英国でレビュー済み
Amazonで購入
Now deprived of both Peter Tosh and Bunny Wailer, this was the first album credited to “Bob Marley And The Wailers”. It has to be said that it loses a little of the vibe of the first two albums, just slightly. Tosh’s ear for a melodic tune was a big miss.

As would be the case for the remainder of his career, Marley’s material could be broadly categorised as “rebellion, Rasta and romance”. Songs would fall mainly into one of the three categories (including “roots” in with “Rasta”).

On this album, “Lively Up Yourself”, “So Jah Seh” and “Natty Dread” express Marley’s growing Rasta consciousness, as his dreads grew longer, album cover by album cover. “Rebel Music (3 o’clock Road Block)” with its excellent harmonica parts, “Revolution”, “Talkin’ Blues”, with its acoustic guitar intro, and the hard-hitting “Them Belly Full (But We Hungry)” pull no punches in confronting social problems head on.

The romance/seduction is found in the rocksteady beat of “Bend Down Low”, with its “i-threes” backing vocals heralding something Marley would use a lot from now on, and the somewhat low-key undercooked original version of the later to become iconic “No Woman No Cry”.

Just as on “Catch A Fire”, other instruments are used to augment the traditional reggae of drums, bass and keyboards - acoustic guitar, lead rock guitar, saxophones, horns (such as on “Lively Up Yourself”) and the increasing use of multiple female backing vocals. It was something that worked well then and Marley continued it throughout his career.

After the seismic blast of the first two albums and the success that would follow with “Live”, “Rastaman Vibration”, “Exodus” and “Kaya”, this always had the feel of a “treading water” album, which is a bit of a shame, as it contains some good material. “Lively Up Yourself” is a Marley classic, full of laid-back skanking rhythm and an enthusiastic invocation to the faithful. “Them Belly Full” and “Rebel Music” show his indignant fire burning at its brightest.
続きを読む
7人のお客様がこれが役に立ったと考えています
違反を報告
レビュー を日本語に翻訳する

Ms WIlliams
5つ星のうち5.0 Heavily remastered ..... :(
2018年2月3日に英国でレビュー済み
Amazonで購入
This is an iconic album which i recall owning on vinyl when released 40+ years ago hence the 5 stars however, this version on CD is digitally remastered and takes away the true rawness and rootsiness of Bob Marley's music. This is a pity for anyone new to the album in this current form. I give it 2 stars for the instrumentation and remixing but 5 stars for the actual album and lyrics etc.
続きを読む
5人のお客様がこれが役に立ったと考えています
違反を報告
レビュー を日本語に翻訳する

Mr. W. Allbrook
5つ星のうち5.0 Still fresh and tight after 40 years!
2016年11月16日に英国でレビュー済み
Amazonで購入
When I first heard this in 1975, I and my friends were really blown away as it was so different to what we were all listening to at the time. It still sounds fresh and tight. The man was a genius!
続きを読む
3人のお客様がこれが役に立ったと考えています
違反を報告
レビュー を日本語に翻訳する