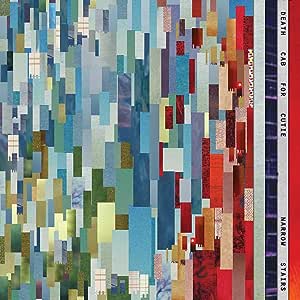 After relentless touring, performances on Saturday Night Live, and appearing on the cover of Spin and Paste Magazines, Death Cab for Cutie brings us Narrow Stairs. Following up their DVD collection, Directions, which sold over 30,000 copies and their platinum selling album, Plans, was no easy task but Narrow Stairs has already been praised by MTV.com as the bands most daring and adventurous effort to date.

Narrow Stairs might be the first album recorded by Death Cab for Cutie since Ben Gibbard's former solo project went unexpectedly stratospheric, but Gibbard hasn't let it go to his head. Oh, OK, maybe a little: lead-off single "I Will Possess Your Heart" is an eight minute jam that speeds off on one long, luminous curve before Gibbard's distinctive vocals swing in, sweet and plaintive as ever. Even when indulging their grander visions, though, Death Cab for Cutie are still familiar as the same band that wrote those fragile, winsome songs back before teen drama The OC came knocking. Never knowingly overstated, built from driving rhythms, flourishes of piano and intricate melodies, Narrow Stairs builds grand, emotionally loaded narratives from small, subtle parts. "Your New Twin Sized Bed" hides a deftly articulated tale of heartbreak and loneliness amidst soothing tangles of guitar, while "You Can Do Better than Me" is a sweet miniature that's part Pet Sounds orchestration, part wistful Dear John. This isn't, as Gibbard would previously hint, a dissonant or especially adventurous album. It proves, however, that Death Cab can extend their scope without diluting the pathos or energy of their music, and it not only sounds great, but bodes well for the future. --Louis Pattison

After relentless touring, performances on Saturday Night Live, and appearing on the cover of Spin and Paste Magazines, Death Cab for Cutie brings us Narrow Stairs. Following up their DVD collection, Directions, which sold over 30,000 copies and their platinum selling album, Plans, was no easy task but Narrow Stairs has already been praised by MTV.com as the band痴 most daring and adventurous effort to date.

Sarugumo
5つ星のうち4.0 Narrow Stairs
2009年12月13日に英国でレビュー済み
Amazonで購入
`Narrow Stairs' is another solid album from Death Cab For Cutie and whilst it isn't a departure from previous albums, when the music is as good as this you wouldn't want it to be. You will find their distinctive sound and song-writing here and stand out tracks have to be `I Will Possess Your Heart' which has an excellent build up before you get into the actual song itself. I also enjoy `Pity and Fear', but other people don't rate this too highly, but that's what is great about this band, they can appeal to many people and what stands out to one will pass another by. The booklet is excellent with all the lyrics and great design and I love getting a decent booklet with an album rather than a flimsy bit of card with just the production credits that are so often used these days. This isn't quite as good as `Transatlanticism' or `Plans' but they were both outstanding albums and will be pretty hard to beat. Saying that this is still very good and well worth a listen if you enjoyed this bands previous music.

Feel free to check out my blog which can be found on my profile page.
続きを読む
違反を報告
レビュー を日本語に翻訳する

Jon
5つ星のうち4.0 Enjoyable if approached with an open mind
2015年10月25日に英国でレビュー済み
Amazonで購入
This album initially doesn't appear as creative and appealing as the previous few albums (Plans, Transatlanticism) but after a few listens, certainly a few of the tracks shine amongst an otherwise 'average' album. Top tracks include Cath (which will immediately appeal to fans of the older, The Photo Album -era of Death Cab for Cutie and is a personal favourite), Bixby Canyon Bridge, Twin Sized Bed and Long Division. The more 'experimental' track, I Will Possess Your Heart is eerily atmospheric and certainly succeeds in creating the frosty scene it strives for - however the intro does not fare well with repeated listens, becoming rather repetitive and potentially quite skip-able.

Overall, if compared with the style of the previous albums, it may be disappointing in places, but as a darker sounding, simpler DCfC album, it is certainly worth the purchase for the tracks specified.
続きを読む
違反を報告
レビュー を日本語に翻訳する

Leolightsaver
5つ星のうち4.0 Good album but Plans is better.
2016年9月13日に英国でレビュー済み
Amazonで購入
Sadly my disc arrived with a scratch in it and the second half does not play from track 5 onwards.

Got my money back and reordered elsewhere.

Some great tracks, there are great high points but the ones inbetween let this disc down. Grapevine fires is a standout song and I will Possess your heart as well however I think the long intro works better on the Video clip.

The song You can do better than me really is the classic that a lot of restless guys (and Girls) can relate to. It is a bit bleak if you want an upbeat song try No Children by The Mountain Goats, but hey Upbeats songs are not in the Realm of DCFC. Good band Good album.
続きを読む
1人のお客様がこれが役に立ったと考えています
違反を報告
レビュー を日本語に翻訳する

Mr. A C
5つ星のうち4.0 Still getting into it
2011年7月21日に英国でレビュー済み
Amazonで購入
After finding this album recommended on iTunes I checked out the previews and liked what I heard. I have been listening to it for a couple of days and am still getting into it (I know its an old album). I am not massive on the indie scene but getting into it slowly. If I was choosing a favorite song it would be Cath.... So it is a good album but I doubt it will be up there in my top 20 albums even after some extensive listening.
UPDATE: This is actually a good album. It does take some listening to but yes it gets better the more you listen to it!
続きを読む
違反を報告
レビュー を日本語に翻訳する