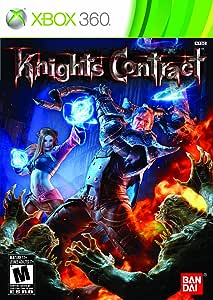 Benjamin S. Sprague
5つ星のうち4.0 A diamond that shines despite some grit on its' surface!
2012年11月15日 - (Amazon.com)
Amazonで購入
Ah, Gretchen and Heinrich! You two certainly set me upon quite the quest. We had good times and we had bad times but overall completing your epic errand gave me quite the sense of accomplishment!

The above two sentences some up Knights Contract as a whole! While this is not a perfect game or one that had a triple A budget to back it up, Knight's Contract has become one of my precious "sleeper gems" of the year.

First I must warn you the last two bosses are very difficult. Unless you are extremely lucky you'll see the game over screen quite often. Having stated that, the game is by no means broken. I was able to finish Knights Contract and I must say that beating it actually made me feel proud as opposed to the "meh" sensation I get when games are dumbed down for mass appeal and mass consumption.

Still with me? Good! I'll get more logs for the hearth! Now that you're comfortable we'll begin with the story. In Knights Contract innocent witches who helped mankind were blamed for the black plague. A charismatic charlatan by the name of Faust convinces the self righteous mob to execute magical practitioners wherever they maybe found. Dealing out the death blows is the earnest executioner Heinrich. He doesn't enjoy his job but alas, he has to do it lest the townsfolk turn on him as well. The last witch Heinrich kills curses him with immortality. Later on Gretchen meets Heinrich again, reincarnated into a new body that was made especially for her by a kindly alchemist. Heinrich is informed that the other witches have been brought back by Faust and they now seek revenge upon humanity. Faust controls them by having their magical shards and apparently he needs Gretchen's shard as well to complete his heinous apocalyptic ritual. Put simply, the story is actually rather good. As you slay each witch you simultaneously feel sorry for them and the relationship that develops between Gretchen and Heinrich is believable.

The main gimmick of Knights contract is you control two characters at once. Heinrich is the bulky warrior with a scythe hammer that dispenses cold hard justice whereas Gretchen learns a plethora of spells that can entrap her foes or juggle them multiple times into the air. As you upgrade Gretchen's incantations they dish out more damage, become more accurate, and cover a larger radius. Though Heinrich is immortal and can escape death's grasp via the tapping the "a" button quickly to pull his body parts back together, Gretchen is fragile and mortal. Once Gretchen's health reaches empty you'll be treated to a heaping helping of fail! Luckily, Gretchen's depleting health can be restored when Heinrich gallantly lifts her up into his strong arms and even while doing so he can do a "quick dash" to avoid incoming attacks.

Due to all the whining and ranting about "one long escort mention" I thought Knights Contract would prove to be nay impossible to chug through and yet I managed to do so with very few actual problems. While Gretchen's ai is not the best it certainly is not the worst. Beyond that, she's actually "helpful" and her spells can balance out the battlefield even when the newest batch of baddies prove to be extra tough! In general keeping Gretchen alive is "common sense". Aka, don't let her lag too far behind and tend to her wounds when necessary. It's not rocket science. The worst case scenario happens when Heinrich is incapacitated and Gretchen is being choked or crushed by a monster. However, there are hidden charms that hasten Heinrich's resurrection speed and add more overall health to Gretchen's life bar. Knight's Contract is never "unfair" unless the person playing it is hell-bent on being a selfish narcissist!

In general KC does a good job with environments. One of my favorite areas included tracking down giant serpents within an icy forest and a series of caves. The artic snakes would leave behind their shed skins that crumbled at my touch. Later on you go through a castle keep that is tangled in Repunzel's hair. It's as if the people who created KC put more imagination into everything because they were trying to make up for the smaller budget allotted to them. Needless to say, this totally works in KC's favor!

Yet not everything is rose petals, sadly there are some thorns. Toward the end of the game there's a large portion taking place within a pocket dimension in which previous areas are somewhat "re-skinned" but are still otherwise mostly the same. Aka, the dreadful "recycling curse"! Additionally , there are some texturing errors causing the feet of the main protagonists' to sink somewhat into the ground when this is not supposed to happen. Fortunately, this graphical glitch is not game breaking. I never encountered an instance where I fell completely through the world. (I'm looking at you, Fable II!)

Bosses are a mixed bag. In some instances they can "ring you out" by knocking you off ledges and most of them require quick time events to slay properly. If you fail a QTE the boss regains a couple of health bars so you have to whittle them down to that point again. For most of the game the "cheap factor" is kept to a bare minimum but as I said before, the last two fights will test your patience and your sanity!

The voice acting and music throughout the game are surprisingly fantastic. Seriously, the audio kept me invested in the characters and story my entire time playing. I felt as if I was reading one of those nostalgic "dark fantasy" books I used to revere as a angst ridden moody teenager! Laura Bailey and the other voice actors who filled in for Heinrich, the seven other witches, Faust, and the bumbling yet lovable alchemist Minikelsus did their respective roles perfectly.

Overall if you're a gamer who is having longing pangs for a modern action/exploration game that is reminiscent of Ico, Onimusha, Genji, Ghouls & Ghosts, as well as the anime Berserk you should totally pick it up!

+The "escort dynamic" doesn't suck as bad as professional reviewers made it out to be.

+Imaginative environments for the majority of the game.

+Thought and care went into the audio side of things.

+ Being able to use the potion tossing alchemist Minikelsus when Gretchen is absent.

+Hidden gallery pages and beneficial items can be found everywhere!

+Gretchen's spells can be "leveled up" to increase their effectiveness.

+"Finishers" are gory and satisfying!

-Last two boss fights are a matter of luck, happenstance, and dealing with mounting frustration.

- Quick time events. The gaming community in general could probably do without them!

- There are certain moments in which Gretchen and Heinrich are separated and have to fight alone. This is when the overall challenge spikes considerably.

-There's a portion of the game that recycles pieces of familiar locales you've already traversed.

-Map is rather useless. You'll have better luck navigating on your gut feelings & instincts!

A "4" is a good game with a few noticeable flaws that are still easy enough to ignore. While this game may not be a "media darling" the slander against it seems hyper exaggerated, dubious, and more than a little unfair. If you're a gamer who is tired of fpses, loves European mythology, enjoys action adventure games, doesn't mind a challenge, or if you're into modern Wicca, Knights Contract is a steal for the present asking price! Though KC is not as refined as God Of War, Dante's Inferno, Dark-Siders, or Lords of Shadow, those who liked those games will easily be able to warm up to this one as well!

Midway 47
5つ星のうち3.0 Only buy at bargain price
2014年5月8日 - (Amazon.com)
Amazonで購入
I'm kind of surprised at any great reviews of this game. It's ok but mediocre, at best. A lot of the elements that you may like from games like God of War or Dante's Inferno are there but they're not executed near as well. I'm not a fan of having to watch over someone else, especially AI, and it can get annoying making sure Gretchen's energy doesn't get too low. Carrying her around to allow her to heal completely kills the flow and action of the game. So does the constant cut-scenes. You get to actually play for a minute or two and then it's back to another scene. The story is ok and the voice acting is good enough but I don't want to sit through a movie when playing an action game. A more personal issue I had with it is the names. I know many characters in games have different and somewhat annoying names but this game has more than usual and they're said over and over, as if to put emphasis on how different and annoying they are. Just my opinion. Overall, I didn't expect a great game and I got it for under $20 so I'm not overly disappointed. There's just enough games out there that are done so much better. If you're looking for a game that has action but is not just another God of War, check out something like Nier or Darksiders. If you find this game at a decent price, it may be worth a playthrough if you don't have too high of standards. And by the way, you can't jump. I get annoyed when playing the original Devil May Cry because of the lack of double-jump, but no jump at all is just crazy. That also hinders the action and flow of the game quite a bit.
続きを読む
1人のお客様がこれが役に立ったと考えています
レビュー を日本語に翻訳する

Rodney A Hounshell II
5つ星のうち5.0 Amazing Game
2014年2月9日 - (Amazon.com)
Amazonで購入
There are both positive and negative things about this game, as with any. I found this game extremely enjoyable, I'm on the final boss right now. The only annoying things are - 1. Confusing level design (I only had difficulty on two of the levels) and 2. Precision buttons to defeat bosses. Otherwise the game is INCREDIBLE. You are an immortal dude who protects a witch to save humanity, It's one of the greatest games I've played. If you have played dante's inferno and liked it, this is a must have in my opinion.
続きを読む
レビュー を日本語に翻訳する

Denver
5つ星のうち4.0 Awesome Magic System
2013年1月1日 - (Amazon.com)
Amazonで購入
I went in to Knights Contract a little hesitant but came out feeling pretty satisfied. The story is pretty good, made me want to actually see what happens next and why. The combat when playing as Heinrich (Knight) is rewarding when comboing with Gretchens (Witch) powers witch in return creates finisher opportunities. When not using her powers in conjunction with light/heavy attacks the combat might not only seem less rewarding but a little clunky at times as well.

I recommend this game to anyone who is a fan of Hack-n-Slash and does not go in thinking this a game of the year title. At the price of 20$ it is well worth a run through.
続きを読む
レビュー を日本語に翻訳する
Amazon.comのカスタマーレビューを見る(15) 5つ星のうち3.8
Amazonプライム会員ならお急ぎ便、日時指定便が使い放題
さらに、映画もTV番組も見放題。200万曲が聴き放題 。クラウドに好きなだけ写真も保存可能。
> プライムを無料で試す