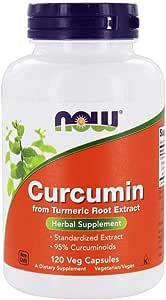 This Is My Real Name, I Had It Legally Changed
5つ星のうち4.0 Using this to chelate ferritin out of body and lower inflammation from Hashimoto's
2018年8月21日にアメリカ合衆国でレビュー済み
Amazonで購入
I have Hashimoto's thyroiditis, so I am using this particular kind of curcumin because it contains no bioprene. Hashimoto's is an autoimmune disease which causes inflammation and attacks your thyroid and kills it, which causes hypothyroidism. Bioprene is black pepper extract, and black pepper is a nightshade—all nightshades should be avoided for people with autoimmune disease. If you want to increase absorption just take the pill with any kind of fat such as an avocado, coconut oil, etc. Just thought I'd mention that since 95% of hypothyroid patients have Hashimoto's and many don't know it because doctors won't bother to test for it. If you are hypothyroid, you probably have Hashimoto's.

Turmeric / Curcumin is not only great at controlling inflammation, but it also chelates excess iron stored in the body as ferritin. Sometimes, people with Hashimoto's have infections (which leads to excess ferritin stores) and this may actually be the root cause of their Hashimoto's. If you have high ferritin, this may suggest you have an infection somewhere that needs to be addressed. I did have an infection on a root canal and my blood tests revealed my ferritin was pretty high at 190-something. I had the root canal tooth pulled a few months ago and now I am taking this Curcumin to help chelate the excess ferritin out of my body and also help get my inflammation under control, since I have not been strictly on the AIP diet for several months (more about that later).

If you have an autoimmune diseasee, you can help yourself a lot by going on the AIP diet (autoimmune protocol) for free. Basically, this means you have to give up alcohol, coffee, grains, beans, nuts, diary, nightshades and flowering spices as well as many supplements you might think are "helping" you but which are actually making you worse. For example, I was taking ashwaganda for stress, but as soon as I stopped taking it, it became obvious that it had only caused me more stress. In fact, when I began taking it, I only had mild stress, but by the time I had to see a doctor for anxiety, it was several years later and my anxiety was through the roof. I had been taking ashwaganda faithfully every day to "help" combat the stress not realizing it is actually a nightshade and only caused my immune system to attack my thyroid more, which caused my thyroid to dump hormones into my body which created a feeling of anxiety. It was a purely physical thing, not mentally-caused anxiety (although when your body is in fight or flight mode for any reason, it amplifies any worries you have so it can seem like a mental issue). Thank goodness I did not make the mistake of going on antidepressants. Many undiagnosed Hashimoto's patients get on antidepressants and it only makes them much worse in the long run because it's not a brain issue at all, so they're just unnecessarily messing up their brain chemistry to treat a thyroid issue caused by an immune disease. What's more troubling is the autoimmune disease never gets treated properly and so the problem just gets worse. Hashimoto's thyroiditis can actually lead to Hashimoto's encephalitis when the brain becomes inflamed. This is not good—it can kill you or completely incapacitate you from being able to hold down a job or live a normal life—and no amount of antidepressant is going to fix it because it has absolutely nothing to do with the mechanisms of antidepressants. It's an inflamed brain that needs to be treated right away.

Unfortunately, this form of curcumin can't really help with brain inflammation, I don't think, but there is a special kind of curcumin that has been created to pass the blood-brain barrier. NOW also sells a version of that.

If anyone here thinks they might have Hashimoto's based on what I've said here, I would definitely recommend you join the Hashimoto's 411 group on Facebook (it's free) and learn how to go about the AIP diet properly, also for free. They have helped thousands of people get their lives back. Basically, you just need to learn what to eat and what supplements NOT to take. It is mostly about NOT taking things that will cause an immune response that will hurt you. A lot of stuff in "thyroid support" formulas such as ashwaganda, selenium and iodine cause inflammation and worsen symptoms. So, you sit there popping pills thinking you're doing the right thing, but you're doing the exact opposite. The Hashimoto's 411 group is a patient-only resource where people share the knowledge they have gained with each other—there are no doctors allowed to try to sell their miracle cures.

To give you an example of how well autoimmune protocol works, when I first went to the doctor 2 years ago, I was about to jump out a window because my anxiety was out of control. My skin had various rashes, dry yellow patches that cracked and bled, my mind was a mess with brain fog, I had red spots on my feet and ankles, a mysterious scab about 2 inches in circumfrence on my left ankle that looked disgusting, night sweats, heart palpitations, pain everywhere in my body, pale yellow greasy skin, my hair was suddenly getting much thinner, I had chronic fatigue, serious depression, and I kept gaining weight to the point that I was 35 lbs overweight. My doctor diagnosed me with Hashimoto's based on a blood test and told me to take a Levothyroxine pill. That's all he said. I went online and Googled "Hashimoto's" and found the facebook group I mentioned and began reading day and night to see what I could do to cure myself. Apparently, there is no cure, but I went on the AIP diet right away and stopped all my supplements. Within days, I started to feel better. By the end of the week, I felt much better, and by the end of the month MOST of my symptoms were gone. This was not results from Levothyroxine, this was results from the AIP diet.

I know this because I have not been staying on the AIP diet for the past several months, since I felt so good I basically thought I was cured. Well, now I have some aches and pains again and I don't enjoy that, so now I am back at it again strictly and I am using this supplement to help speed up recovery again.

I know a different kind of curcumin worked pretty well in the past, so I think this will work fine. I've only taken 3 pills so far since yesterday and I'm feeling better already.
続きを読む
160人のお客様がこれが役に立ったと考えています
違反を報告
レビュー を日本語に翻訳する

Paraszka75
5つ星のうち5.0 Finally!!!
2016年5月19日にアメリカ合衆国でレビュー済み
Amazonで購入
Approximately 2 1/2 years ago I was diagnosed with an inflammatory disease in addition to Fibromyalgia. The Rheumatologist prescribed Prednisone and I was told I would have to use it for 1-2 years. I refused because of the side effects and started taking Curcumin Turmeric Root Extract from another company. It was like a miracle. But then the product became unavailable. Since then I have tried the product from several manufacturers and became progressively worse. Like many people I fell for the hype of more processing to provide higher bio-availability. Then I realized that a natural product that has helped many people for many years had now become nothing more than a highly processed supplement.
Then I purchased Now Foods Curcumin Turmeric Root Extract. Nothing added or additional processing. After just two weeks I am starting to feel an improvement in my condition.
From now on I will not consider any reviews written by people that received a free item, specially after they received the item for writing a review. In my opinion, this influences the rating. Also, you cannot give a honest opinion about the effectiveness of a supplement after just a few days. It takes time for the body to absorb and adjust.

Conspicuous Consumer
5つ星のうち5.0 Capsule Design is Easier to Swallow
2018年4月8日にアメリカ合衆国でレビュー済み
Amazonで購入
I bought these to replace  Doctor's Best Curcumin From Turmeric Root with C3 Complex & BioPerine, Non-GMO, Gluten Free, Soy Free, Joint Support, 1000 mg, 120 Tablets  which I couldn't swallow. The capsule design of the Now Curcumin goes down a lot easier. It has 1/3 less than Doctor's Best but I can double the dosage if I need to.
続きを読む
3人のお客様がこれが役に立ったと考えています
違反を報告
レビュー を日本語に翻訳する

W. ANDERSON
5つ星のうち5.0 Great savings
2009年11月10日にアメリカ合衆国でレビュー済み
Amazonで購入
Same brand that I buy locally for over twice the price. I bought a few bottles to save on the shipping costs, worked out well. I take one each morning for digestive problems (IBS) and the results have been very good.
続きを読む
48人のお客様がこれが役に立ったと考えています
違反を報告
レビュー を日本語に翻訳する
すべてのレビューを参照します
同様の商品をご覧になりませんか？ こちらのリンクで参照ください。レビュー高評価商品クルクミンサプリメント
賞味期限または消費期限のある商品: Amazon.co.jp ではお客様に十分に残存期間のある商品をお届けするようつとめております。お届けの商品にご満足いただけない場合は、各ストアの返品についてヘルプページ でご確認ください。