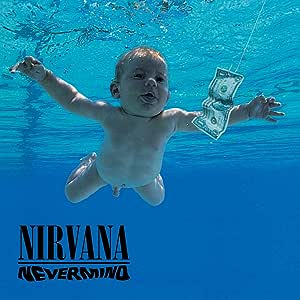 Released in September 1991, Nirvana's sophomore album and major label debut elevated Kurt Cobain, Krist Novoselic and Dave Grohl from a critically acclaimed Aberdeen, Washington, cult band to generational spokesmen who'd unwittingly created a cultural shift and musical touchstone. Rising to No. 1 the world over by year's end and ultimately selling over 30 million copies worldwide, Nevermind would come to be much more than one of the most successful and influential albums of its or any era. As the album that returned unaffected rock 'n' roll integrity and passion to the top of the charts, Nevermind would prove a singular inspiration to fans and musicians alike over the last two decades--and will undoubtedly do so for generations to come

Up through 1990, a raw, raging mix of ferocious punk and heaving hard rock might have become an underground hit-but a #1 pop album? The times they were a-changin', and this was the record that changed the whole ball game, relegating pop-metal to the background and putting the grunge and alt-rock bands on top. It's been 20 years since Nirvana took over the rock world with one of the most influential albums of its time. Nevermind returns to us in remastered form on CD, in deluxe form on 2 CDs or four 180-gram vinyl LPs, or in a Super Deluxe box set! All editions contain their watershed smash Smells Like Teen Spirit plus Come As You Are; Lithium; In Bloom; Polly , and the rest of the original LP. The deluxe editions add live versions of Drain You; Been a Son , and Polly ; unreleased Smart Studios recordings of In Bloom; Immodium (a.k.a. Breed ), and Lithium ; unissued BBC recordings; a wealth of unreleased boombox rehearsals, and other ultra-rarities. The Super Deluxe set includes everything already mentioned plus two further CDs with the unissued Devonshire mixes of the entire album (minus Polly ) and the "Live at the Paramount Theater" concert from '91. To top it all off, you get the DVD of that Paramount concert-the only known Nirvana concert shot to film-plus the Smells Like Teen Spirit; Come As You Are; Lithium , and In Bloom music videos! The ultimate celebration of a watershed moment in American rock music!

Brian61
5つ星のうち5.0 Nevermind (20th Anniversary Remastered Edition)
2014年1月6日に英国でレビュー済み
Amazonで購入
This album slipped me by in the past because of all the hype about Nirvana, I am more concerned about the music than the personalities. I saw several programs about Nirvana including the Classic Album series of this album on Sky Arts and realised what I had missed. I ordered it straight away and have loved it ever since.
続きを読む
違反を報告
レビュー を日本語に翻訳する