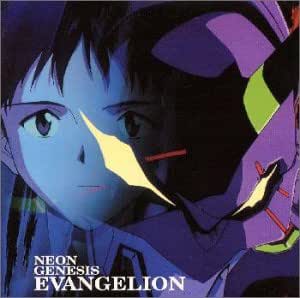 6. BAREFOOT IN THE PARK

14. A STEP FORWARD INTO TERROR

T. Alexander
5つ星のうち5.0 Great anime music
2009年7月22日に英国でレビュー済み
Amazonで購入
This CD of music from the great, if confusing, Neon Genesis Evangelion anime is well worth getting for any fan of the series. The CD includes the full version of the opening theme Cruel Angel's Thesis and three versions of the end credits song `Fly Me to the Moon', of which the first version song by Claire is by far the best.

If I am honest, the only reason I bought this CD was for the opening and closing credit themes and while I do feel that these songs are well worth the price of the CD on their own, the rest of the tracks on the CD are also great. Manny of the tracks are in different styles but they are all very appropriate for the anime and fit perfectly with the series.

Bram Lambrus
5つ星のうち5.0 The 1st of Three Key Evangelion Soundtracks
2004年8月13日にアメリカ合衆国でレビュー済み
Amazonで購入
This is "Neon Genesis Evangelion", the first of the three fundamental Eva soundtracks, with 23 tracks and clocking in at 58 minutes (and 2 seconds). This soundtrack covers much of the basic music heard in the beginning of the anime series. An excellent collection. EXCELLENT.

The lyrics pamphlet includes thought-invoking words from Director Hideaki Anno, Director of Music Shiro Sagisu, and two Assistant Directors. Shinji and Eva Unit-01 are on the cover. Includes Japanese and English translation lyrics for the long version of Cruel Angel's Thesis, and words to Fly Me to the Moon. The rest are credits. On the back of the case is a scene with Eva-01 walking away from a smoky explosion site.

A runthrough of the tracks:

#2) Fly Me to the Moon -- A very standard version of FMttM. Long version, not TV size.

#4) Rei I -- Ahhh, Rei! Serene and beautiful music in the name of Rei. Sad and peaceful piano and violin. It will remind you of the scenes with Rei, who herself is serenely beautiful.

#5) Hedgehog's Dilemma -- Also sad, with acoustic guitar and high notes from a piano. Will fill you with the blues.

#7) Ritsuko -- I don't remember this from the anime, but it's fine. Doesn't particularly remind me of Evangelion, nor Ritsuko, but the music is fine. Plucky guitar and piano.

#8) Misato -- Oh yes, this is Misato. Remember the cutesy music playing on those mornings when Misato plops down at the table and downs an entire can of beer in front of Shinji? Yeah, this is it. Very upbeat.

#9) Asuka Strikes! -- Music from Asuka acting high and mighty (while Shinji just gapes). it's almost country, with what sounds like a fiddle, and country guitar.

#10) NERV -- A rather imposing tune, like descending into the Geofront and walking towards the giant pyramid that is NERV.

#11) TOKYO-3 -- This is the wonder that Shinji feels while first catching a glimpse of the massive Geofront from above.

#12) I. Shinji -- Almost like some sort of funeral march, music from a dramatic moment. Oppressing piano, backed up with a violin.

#14) A Step Forward Into Terror -- Starts off grand, music from an Eva rising from defeat and about to make a winning move.

#18) The Beast -- Except for the pause in between tracks, you'd never notice track 18 wasn't a continuation of track 17. Gets even faster

#19) Marking Time, Waiting for Death -- This is quiet, eerie music. It builds up, then breaks out in a wave of spent suspense.

#22) Next Episode <30 Second Version> -- Music playing when Shinji and Asuka must live and breathe together, prepping for their synchronized fight with an angel.

#23) Fly Me to the Moon <YOKO TAKAHASHI Acid Bossa Version> -- Background has cutesy exotic percussion (bongos, congas, that thing that makes noise when you shake it...) and upbeat guitar, like ska or reggae. Full version.

Keep in mind that Evangelion, Evangelion II, and Evangelion III are a sort of set, and that this soundtrack alone is by no means meant to cover all the =brilliant= pieces heard in the Evangelion anime series. Perhaps it is best to purchase this or Evangelion II first. Thank Gainax for these US releases - otherwise I'd still be coughing up money for those expensive imports. I recommend all three, you really can't go wrong; the music is to die for ^^.

Mad Marcus
5つ星のうち5.0 Still as good as when it was composed twenty-plus years ago.
2016年7月20日にアメリカ合衆国でレビュー済み
Amazonで購入
The classic theme opening and two versions of 'Fly Me to the Moon' that are heartbreakingly beautiful. And if you listen carefully, you can hear the homage to all the wonderful Gerry Anderson shows they drew from as they created Evangelion. Well worth the price.
続きを読む
1人のお客様がこれが役に立ったと考えています
役に立った
フィードバックを送信中...
フィードバックをお寄せいただきありがとうございます。
申し訳ありませんが、お客様の投票の記録に失敗しました。もう一度試してください。
違反を報告
レビュー を日本語に翻訳する