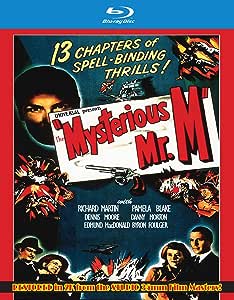 The police are baffled by a number of bodies found in the river, with tags marked "Mr. M." Detective-Lieutenant Kirby Walsh (Richard Martin) is told by his boss, Police Chief Dan Blair (Joseph Crehan), that the lab found traces of an unknown chemical in the victims, who rather than drowning appeared to have died of brain paralysis. The villain is soon revealed to the audience, Anthony Waldron (Edmund MacDonald), a criminal thought by the police to be dead, who uses a drug, "hypnotrene" to put people into an hypnotic state, though it has taken him several tries to get a non-fatal dosage. He uses the stuff to keep his grandmother, Cornelia Waldron (Virginia Brissac) from finding out he is alive and hiding in the basement, with the help of two associates, Marina and Derek Lamont (Jane Randolph and Danny Morton), posing as caregivers. Anthony Waldron needs grandma's respectability as a cover for his operations. His main interest is getting the plans for a new advanced submarine engine, the invention of Dr. Kittridge (John Hamilton), to sell to a foreign government. He abducts the scientist and injects him with hypnotrene, but only finds out where the plans are stored before Kittridge dies unexpectedly of heart failure. The plans are destroyed, along with Kittridge's lab and one of Waldron's minions, since the lab safe was booby-trapped. And Kittridge's disappearance has alerted the authorities in Washington, who send agent Grant Farrell (Dennis Moore) to help with the investigation. Also helping out is an insurance investigator, Shirley Clinton (Pamela Blake) who finds that Cornelia Waldron had a financial interest in Dr. Kittridge's laboratory, and works with Mrs. Waldron's lawyer, Wetherby (Byron Foulger). Kittridge farmed out manufacture of various parts of his engine, which in true serial-movie fashion must be collected to recreate the plans. But this being a Universal serial, there is even more. Someone knows about Anthony Waldron, and sends a phonograph record with a whispered message, claiming to be "the Real Mr. M" and threatening to tell the police what he knows if Waldron doesn't follow orders.

Universal dropped out of the serials market owing to changes in company ownership, when the focus was changed to higher-end films. More serials were already in the planning stage, so it isn't too surprising that the quality of their last serial is typical of their output. The atmosphere is mostly realistic, the story taken seriously without "comic relief" characters. The plot moves along fairly well, if not as directly as one might hope, but there are enough scientific gagets to keep up the interest. Dennis Moore does a lot of smoking for a serial movie hero but is believable as a Government agent, and Pamela Blake is directly involved in the investigation, not just present to be rescued. Edmund MacDonald is suitably sinister as Anthony Waldron, and the distrust among the bad guys, accusing each other of sending the recorded messages, adds an interesting dimension. As was usual for later Universal serials the chapter introductions are given as short acted-out segments, and one tires of hearing all the plot details, though it isn't as bad with a day or more between the chapters, the way serials should be watched.

VCI's release on VHS tape, # 1743, uses a print with main titles from "Serials Incorporated" having a reduced picture size and still-frame background, probably a 16mm reduction intended for television. There are some scratches, dirt, muddy contrast and other ills often seen in older video releases of Universal serials, though it is reasonably free of splices, and the "next week" titles are the originals. The image isn't especially sharp, and the contrast is a little high but not to the point of faces going blank. The sound, while fairly clear is of restricted frequency range, even on the Hi-Fi track. The package has a 1994 copyright and it was in VCI's catalog for several years, but unfortunately some copies, including the one I got, were duplicated at EP speed, still on two shelf-space-consuming cassettes with no indication of the speed on the outside of the package, and the duplication process wasn't done well. The tracking on my copy needed to be readjusted during some of the chapters, a problem not corrected by "auto-tracking" VCR's, and it was often hard to find a good setting for video tracking that worked with the hi-fi sound, even when tried with several VCR's. Other copies would doubtless play better; finding one dubbed at SP might help with the tracking, and maybe a little with the image quality, though I wouldn't expect miracles. Still, it is otherwise as "watchable" as most non-studio serial movie video releases from 'way back in the late 1900's.

This is a fairly good serial for 1946, and a DVD edition would be welcome. I'd rate it 4 stars if it had a decent transfer even if the print was no better than this one. As it is, the VHS tape provides access to the serial for those willing to deal with its faults, or lucky enough to get a good copy.

Bernard Haines
5つ星のうち5.0 mysterious mr. m
2017年5月21日 - (Amazon.com)
Amazonで購入
this film deserves to be on dvd it is very entertaining and timely. in fact it was ahead of its time. It is one of the first serials to include the deat h of a number of it characters by narcotics. Emund MacDonald was a very convincing villain and Dennis Moore was a very good government agent. it was well acted when it coms out in dvd I will obtain my copy
続きを読む
1人のお客様がこれが役に立ったと考えています
レビュー を日本語に翻訳する

Jason Wu
5つ星のうち5.0 Nostalgic Old Films from the Good Old Days
2019年10月23日 - (Amazon.com)
Watched these great shorts before those little brats came to society in the mid to late 50s. Great short films to watch if you are sick and tired of this post counterculture internet overpopulated earth era.
Great shorts before those baby boomers born between 1945 to 1960. Good thing these shorts were created fast from the early 40s to the end of the 40s before the terrible ugly fashion of the 50s and paramount supreme court case came in 1948, destroying theatre and before television was popular in the 1950s.
Cannot wait to rewatch these when I'm in my 30s to death.
続きを読む
レビュー を日本語に翻訳する

J. Lovins
5つ星のうち5.0 "The King of Serials...VCI Entertainment ~ The Mysterious Mr. M (1946)"
2005年11月24日 - (Amazon.com)
VCI Entertainment and Universal Pictures present..."The Mysterious Mr. M" (1946) (Dolby digitally remastered), a 13 Chapter cliffhanger from an action packed Universal serial era featuring an outstanding cast with Lewis D. Collins and Vernon Keays at the helm....story line has the disappearance of Dr. Kittridge (John Hamilton) (who later played Perry White in the TV Superman series with George Reeves) who is a famous submarine inventor...what secrets lie underneath the Waldron mansion and why is everyone being drugged, could it be for control...and who is this mysterious voice from the stranger known as "The Mysterious Mr. M"....can our heroes Grant Farrell (Dennis Moore) and Kirby Walsh (Richard Martin) solve all the traps that are set by the henchman of Mr. M....will our insurance investigator Shirley Clinton (Pamela Blake) discover the plot of Anthony Waldon (Edmund MacDonald), only to be captured by him....what is this strange hypnotrene drug that takes control over a persons mind....is there an antidote for this strange drug, will there be time to adminster to help the cast and crew of this Universal serial cliffhanger...don't leave the theater until the final chapter is over and done with "The Real Mr. M"....just remember double thrills, chills, mystery and suspense...hitting the bull's eye with excitement...don't miss a single spine thrilling episode..return next week to this local theater for another episode of action and adventure that will keep you thrilled until the next chapter.

Great job by VCI Entertainment for releasing "The Mysterious Mr. M" (1946), the digital transfere with a clean, clear and crisp print...looking forward to more high quality releases from the vintage serial era of the '30s, '40s & '50s...order your copy now from Amazon or VCI Entertainment where there are plenty of copies available on VHS, stay tuned once again for top notch action mixed with deadly adventure from the "King of Serials" VCI...just the way we like 'em