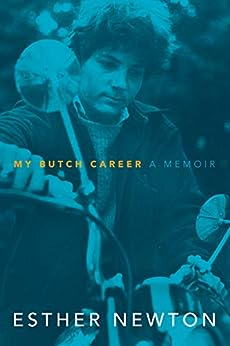 "My Butch Career is an arrival story.... All anthropologists, students as well as educators, should read this because it calls attention to what has changed and shows the importance of LGBT/queer social movements and networks of non-normative communities."
--Anika Keinz "Journal of the Royal Anthropological Quarterly" (4/1/2021 12:00:00 AM)

"The most captivating part of the book sees Newton circulating through second-wave feminist and lesbian circles in New York and Paris, where the debates, social hierarchies, and tangled affairs she encounters bring her to a late coming of age. In the eighties, her scholarship, once ignored, achieves recognition with the rise of gender and sexuality studies. The book is a thoughtful examination of how personal experiences spur intellectual progress."-- "The New Yorker" (2/4/2019 12:00:00 AM)

"My Butch Career is an important narrative of liberation that contributes singularly to the growing body of collective LGBTQ history. It covers the first forty-one years of the writer's life, a time frame that calls out for a sequel. Newton concludes her memoir with a tribute to the queer writers who have preceded her. With this work, she has secured her place in that pantheon."--Anne Charles "Lambda Literary Review" (3/19/2019 12:00:00 AM)

"My Butch Career joins a distinguished list of lesbian herstories. . .. It is for readers interested in the psychological and cultural challenges for an individual who identifies as a butch lesbian, as well as readers who are interested in lesbian herstory within the greater context of thegay rights movement."--Cassandra Langer "Gay & Lesbian Review" (3/1/2019 12:00:00 AM)

"In the tradition of the best memoirs, it is chattily engaging, historically illuminating, and deeply, provocatively ruminative. . . . My Butch Career feels intoxicatingly, palpably real: It's a story we can reach out and touch and one we can also situate ourselves in, even if we're decades younger than the 78-year-old Newton. What makes My Butch Career so compelling is that while writing about herself, Newton is also examining her milieu with the eye of the cultural anthropologist she became. The story she tells is as much our story as it is hers."--Victoria A. Brownworth "Curve" (9/15/2018 12:00:00 AM)

"Newton is not afraid to get personal and offer her mistakes, personality development, and failed relationships for contemplation. After decades of personal and professional struggle, Newton finds a scholarly community in an evolved culture and helps to create the academic study of gender and sexuality. This book is simultaneously a memoir and an exemplar of this important field."--Emily Dziuban "Booklist" (10/1/2018 12:00:00 AM)

"Throughout My Butch Career, Newton is remarkably candid about the ways that class has influenced her work and perspective on the historical events unfolding around her. . . . It's a testament to just how great an anthropologist and chronicler of queer life she is that Newton makes sure to include the kinds of details that paint a more complete and complex picture of the world as she's experienced it."--Alexis Clements "Los Angeles Review of Books" (12/23/2018 12:00:00 AM)

"Esther Newton's sharp insights into her developing consciousness are sometimes so precise and revealing that they take my breath away. Her wit gives her personal traumas in a hostile society universal meaning, making her pain and pleasure available to all, while her reflections on the interconnections of gender, sex, and feminism in love-making remain fresh. Capturing the multiple layers of identity and examining how social forces shape our lives, My Butch Career is absolutely unique in the way it explores women's desire as both personal and social. I know of no other memoir like it."--Elizabeth Lapovsky Kennedy

"In My Butch Career Esther Newton takes her readers through her chaotic family history, the uncharted territory of coming to terms with an identity that is far outside the norms for her generation, and the transforming effects that new social movements had on her. Bringing personalities, scenes, conversations, and relationships to life, Newton has written a book that is powerful, gripping, and immensely readable."--John D'Emilio

Esther Newton is formerly Term Professor of Women's Studies at the University of Michigan and Professor of Anthropology at Purchase College, State University of New York. She is the author of several books, including Margaret Mead Made Me Gay and Cherry Grove, Fire Island, both also published by Duke University Press, as well as Mother Camp.
--このテキストは、paperback版に関連付けられています。

Francoise Joiris
5つ星のうち5.0 Important and enjoyable, everyone should read this
2018年12月3日にアメリカ合衆国でレビュー済み
Amazonで購入
I think about identity, about finding/losing/being oneself. About history, about culture, about who we are, who I am, where we have come from and are going.

I just finished reading My Butch Career, by Esther Newton. I wanted to read it because Esther is a dear friend, a long time friend, a mentor and student both. We came to know each other through our dogs, through dog sports, the first shared interest we realized we had. I was in my middle twenties, she was twenty years older than that. When we met she saw in me a young heterosexual married woman, a few years later I was also a mother. What we had in common, she thought, were the dogs. What we had in common, I thought, was a whole lot more than that. But what we had in common was the very thing that kept us from sharing our common ground for nearly twenty years. The space between us, the words not spoken and trusts not shared, are at the heart of why our world needs this book. I started reading it because it was written by a friend, I finished reading it because it filled a hunger I almost did not know I had, because it gave me a past within my culture, it gave me a history.

It was common back then, when I first met Esther, to not trust ‘them’, because they were straight, because they were not us, because we had been terrorized, ostracized, abused. And so, as much as we had in common within the realm of dog sports, she was guarded, because, from outward appearance, I was not one of us, but one of them. This much I understood from the start, and while I yearned for elders to guide me in our culture, I did not hold it against them that they could not see beyond story that my life had become. There is nothing special about me or my circumstances, many queers of my generation married, some certainly because they were trying to prove to themselves or others that they weren’t gay, but for some of us it was more complicated, nuanced. No man ever caused my heart to stop with a glance, nor did any man fill me with raw sexual desire, but I still could love them, after a fashion, I could tell myself it was enough, because I wanted children, and, as I was told by my girlfriend shortly before we split, shortly before I married a man, it wouldn’t be fair to raise children with lesbian parents, they would be tormented at school, bullied from the start. My husband knew, my close friends knew, but the rest of the world saw the outward appearance, the woman with husband and children, the woman who, by default, was straight. Or, almost worse, closeted by fear and possibly self loathing. I was neither straight nor closeted, but with two children in tow and a husband at home, I was somehow on hold, queer on ice, waiting.

All this has changed. There is no longer a husband. My outward appearance matches what I know about myself. My partner and I out in both our public and private lives, I am once again one of us, and what I always knew Esther and I had in common is now common knowledge.

When I first met Esther, I was young, conflicted. The things that drew me to her (and I do not mean this in any romantic or sexual way, but in the way one is drawn to a mentor, the way one innately understands another’s ability to teach one something that is both important and lacking in ones own self), at the same time made me uncomfortable. It wasn’t that she was gay, gay had surrounded me my entire life, being raised, as I was, by lefty parents in the heart of Greenwich Village in the 1960s and 70s, having been taken by my father, at the age of eight, to see, carefully, from behind a police barricade, what would become known as the Stonewall Uprising. But butch, that was the thing. Butch, not in the way that I had seen it so often portrayed, not really quite butch like me, but a version that made me make sense of myself. Butch as she describes in the very first pages of her memoir –

‘is about a gender expression that combines some version of the masculinity you saw around you as a child with same-sex desire.’

My father, that version of masculinity he portrayed, was in my core, and far from what I had seen as butch in my limited exposure. My father, who was lefty, liberal, intellectual, and possibly gay himself. My father who was the stay at home parent. My father who was sensitive and soft and knew nothing of sports or of being tough and unemotional. I struggled with this later, with some more traditionally raised women telling me I was not butch enough, not ‘man’ enough, because the men who shaped their childhoods were the quiet stoic sort who tinkered with cars and watched football on TV.

To be part of a culture that has traditionally been marginalized and outlawed is difficult. To be part of a culture that is connected not by blood or location, but by, for lack of a better word, desire, is a complicated thing. From my mother and aunts I learned the stories of their childhood, mixed race children in 1930’s Paris, the torment and teasing they endured. My father, a young boy in Germany at the time the Nazis rose to power, shared those terrifying events. I understand my biological past and the pains visited upon my biological kin, I can feel it in my bones. But there was no ‘parent’ to tell me the stories of my other culture, only sweeping brush accounts. I came into being without knowing where I came from.

This book makes a brilliant start at changing that, a first hand glimpse at my cultural past, at who we were and how we became who we are now. I started reading it because Esther is a friend, I finished it because it fed a hunger that I was not even quite aware of having until it was sated. We should all read this, take it in, understand. This is our people, our culture, our blood.
続きを読む
7人のお客様がこれが役に立ったと考えています
違反を報告
レビュー を日本語に翻訳する

Mary G. Hutcherson
5つ星のうち5.0 The hero of her own story
2019年1月29日にアメリカ合衆国でレビュー済み
Amazonで購入
Esther Newton shares her story of growing up identifying as a boyish girl in an unusual family and the challenges of finding her way to professional success. She describes Her joy in finding and joining the women’s movement and gay liberation . She tells her stories of exploring her sexuality and relationships with much honesty and her sense of humor makes this a fun read too.
続きを読む
6人のお客様がこれが役に立ったと考えています
違反を報告
レビュー を日本語に翻訳する

Maureen Brady
5つ星のうち5.0 We need more books like this!
2019年5月21日にアメリカ合衆国でレビュー済み
Amazonで購入
I loved reading Esther Newton's trip through time, having lived in New York City in the late 60's and through the 70's. It reinforced so many of my memories, of the struggles and the joys of coming out in that period, falling into the wild dreams of us dykes, emboldened by our togetherness, yet feeling the precariousness of being on the edge. Esther captures all of it, and gives an interesting background story as well, in terms of her upbringing and early influences. Nicely written with good pacing, I found this memoir fully engaging from beginning to end. I also appreciated her highlighting of the butch experience, while leaving open her assessment of gender questioning culture that has followed in its wake.
続きを読む
1人のお客様がこれが役に立ったと考えています
違反を報告
レビュー を日本語に翻訳する