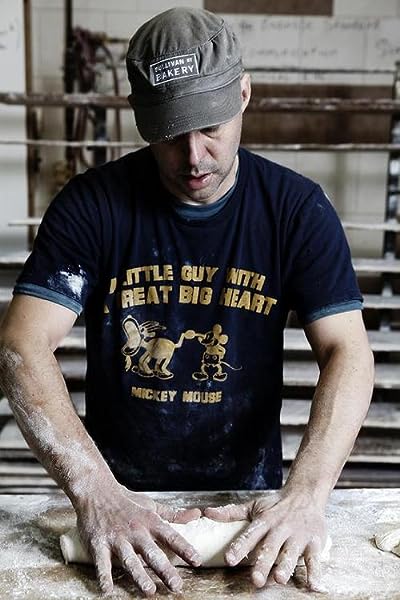 It's bread above all that [Lahey] knows and loves...The man can do wonders with flour and water, massaged or not...He can do fluffy, crunchy, supple, dense. He can do pizza Bianca--man, oh man, can he do pizza Bianca--those salty squares of almost entirely naked crust.--Frank Bruni

Jim Lahey...opened the Sullivan St Bakery in 1994 selling breads that no one in the city had made before...Sullivan St became the name to look and ask for, and...became...the place to go for the incredibly airy, oil-brushed, lightly salted pizza Bianca, which is even better than that of the bakery in Rome's Campo de' Fiori.--Corby Kummer

Mr. Lahey's method is creative and smart...What makes Mr. Lahey's process revolutionary is the resulting combination of great crumb, lightness, incredible flavor--long fermentation gives you that--and an enviable, crackling crust, the feature of bread that most frequently separates amateurs from the pros...With just a little patience, you will be rewarded with the best no-work bread you have ever made.--Mark Bittman

The secret to making a foolproof, nearly labor-free loaf that tastes as delicious as anything from a baker...[Lahey] is the most intuitive bread baker I have ever met.--Jeffrey Steingarten

Jim Lahey has received two James Beard Awards and is the author of The Sullivan Street Bakery Cookbook, My Bread, and My Pizza. He lives in New York City with his wife and coauthor, Maya Joseph.

Rick Flaste served as the editor of the New York Times Dining Section at its inception, creating many of its acclaimed features. He has collaborated on numerous cookbooks and books.

Bredon House
5つ星のうち3.0 I feel slightly ripped off
2016年5月24日に英国でレビュー済み
Amazonで購入
I bought this book to learn new techniques and recipes because I am a recent convert to no-knead bread baking. Since finding the method in April I use it far more than traditional baking.

However, I feel slightly ripped-off because the £20, 223 page book contains about 70 pages of relevant images and recipes. The remainder is repeats of the basic process. Followed by a 60 page section on making sandwiches, bread crumbs and using stale bread. Plus loads of white space and images. I think £12.50 would be a more reasonable price.

As for the actual recipes, they aren't greatly changed from the first basic loaf but then that is the nature of baking. I'm glad I have bought to book and will use some of the ideas but think it is over-priced.
続きを読む
14人のお客様がこれが役に立ったと考えています
違反を報告
レビュー を日本語に翻訳する

Spyro
5つ星のうち5.0 best bread ever
2019年1月15日に英国でレビュー済み
Amazonで購入
I've had good success with kneaded bread, thanks to Paul Hollywood, but this no-knead bread is even better. I've only tried the plain white so far, but it has worked every single time. I'd done them round in my dutch oven and long in a rectangular cloche. They've all worked brilliantly. I'm about ready to experiment with some of the other breads in the book now.
続きを読む
2人のお客様がこれが役に立ったと考えています
違反を報告
レビュー を日本語に翻訳する

Simon Butler
5つ星のうち5.0 Great book, even better bread!
2010年1月11日に英国でレビュー済み
Amazonで購入
I had already been baking bread using Jim Lahey's no-knead bread method for over a year having discovered it on the internet. As I am hopeless at kneading dough his method appealed to me. It really is the simplest recipe ever but produces amazing bread, the best I've ever baked and the best home baked bread I've ever tasted. So when I saw that he had written a book I just had to buy it. And I am pleased that I did as it is an excellent book.

He has split the book into 6 chapters, each one on a different subject. Chapter 1 is a kind of bread making autobiography explaining how he got into making bread (to impress a girl!) and his visits to Italy to sample Italian bread baking.

Chapter 2 introduces his no-knead recipe and chapter 3 then builds on this with variations such as rye, olive, Irish and Apple versions amongst others. He also includes some recipes for traditional Italian breads such as Stecca (thin Italian baguettes), Stirato (larger Italian baguettes) and Ciabata (slipper loaf). These are all based on his no-knead method and I am pleased to report they involve no kneading whatsoever!

Chapter 4 is his pizza and focaccia sections. He gives a recipe for his pizza dough (which differs slightly from his bread recipe) and then recipes for lots of different pizza toppings and variations. His Pizza Bianca - kind of like a cross between focaccia and pizza - looks lovely and I shall be trying this one soon.

Chapter 5 is all about sandwiches, which initially struck me as odd and perhaps a bit of a filler but the chapter does make sense. This is an American book by a New Yorker and New Yorkers like nothing better than to go to a deli for a sandwich. So this chapter gives recipes for both sandwich fillings - eg roast beef, roast pork, aioli (garlic mayo), pickles etc - and also the best sandwich combos. I will also be trying these out too.

Finally chapter 6 deals with recipes to use up your left over bread. Again, on first inspection this seemed like a filler section but this has lots of lovely looking recipes in it too; I am looking forward to trying the chocolate torte made using no-knead breadcrumbs!

As I only had the book for about a week I have only had time to make one of the recipes so far - the Stirato. This recipe does involve slightly more work than the basic no-knead bread recipe I've been using this past year before I bought the book but the finished sticks are just as delicious as the bread was! I look forward to trying more of the recipes soon.

So overall, this is a great book full of interesting recipes and is a good read in its own right. It also features some excellent photography. The photos are either presented in a step-by-step fashion so you can see exactly what you need to do (and what the dough / bread should look like) at every stage or they are simply stunning photos of the finished breads themselves. I would wholly recommend this book to anyone interested in baking your own artisan bread that tastes as good as it looks.
続きを読む
26人のお客様がこれが役に立ったと考えています
違反を報告
レビュー を日本語に翻訳する

Falconia23
5つ星のうち5.0 A good buy for bread bakers
2016年12月13日に英国でレビュー済み
Amazonで購入
I recently have been looking at no knead recipe on the internet and have tried out a few with varying results in terms of the taste and appearance of the bread.

When I tried out the basic recipe from this book, the bread came out looking and tasting almost like a sourdough bread. The book has many photo illustrations which I found very helpful. The other recipes in the book are very interesting and I can't wait to try them all out! Definitely will recommend this to other bread bakers.
続きを読む
2人のお客様がこれが役に立ったと考えています
違反を報告
レビュー を日本語に翻訳する

Sally V.
5つ星のうち5.0 Thank you Jim Lahey!
2010年5月12日に英国でレビュー済み
Amazonで購入
I bought this book out of interest, as I've been using Jim's no-knead recipe for a while now, and I'm glad I did. I was fascinated to read the backgound to this method of baking bread and to learn more about Jim, himself.

Having tried unsuccessfully to make bread in the traditional way, (loaves always seemed to turn out like bricks), I was overwhelmed with the fantastic results from this no-knead method. It's extremely easy and the bread is superb - delicious chewy crust and a wonderful light and open crumb. It's hard to believe such an easy recipe can produce such a fantastic loaf. Don't worry if you don't have an iron pot in which to cook the bread - I use a glass pyrex casserole with a lid, and it works perfectly.