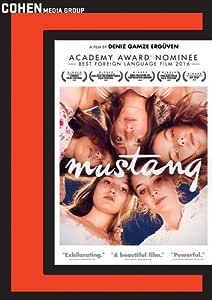 It s the beginning of summer. In a small village in northern Turkey, Lale and her four sisters are on their way home from school, innocently playing with local boys. But prying village eyes view their games with suspicion about the girls behaviour. Their refusal to repent quickly causes a scandal among the family. Drawing vocal support from critics, festivals and audiences across the globe, this stunning Oscar-nominated debut from female director Deniz Gamze Ergüven is set to be one of the most talked-about and celebrated films of the year.

IntoMoYouKnow
5つ星のうち3.0 Anti-religious dogma commentary against arranged marriage
2018年2月16日 - (Amazon.com)
Amazonで購入
It's a bit mystifying how this wound up with an Oscar nomination. This is a well-made film, but its story feels more like required reading than an entertaining film. The film presents its 5 leads, all sisters, as girls with a slight wild streak in the face of a family which appears to value them more like cattle than humans. Like a Turkish "Virgin Suicides," the elders of the family attempt to lock up their girls after they engage in mostly harmless horseplay with boys from the village after the school year ends. Religious mania fills the air as the girls are forced to dress demurely and married off to boys they've never met. It would be medievel if the story didn't take place in the here and now.

This is one of those films where no one has any shade of grey, no pun intended. Here, you're either a villain or a victim. There's a semi-intriguing commentary about Turkish men involving women and soccer, but other than that, the film feels like a dirge. It even warns you that the girls will never be together again. If you find that entertaining, rent it. I expected more but was disappointed.

Michael P. Dempsey
5つ星のうち4.0 The tone is surprisingly sweet and even funny in places for a movie with ...
2017年6月13日 - (Amazon.com)
Amazonで購入
Mustang is a Turkish movie inspired by Sofia Coppola's Virgin Suicides. It takes place in a remote village in Turkey and follows the story of five sisters whose very conservative family slowly takes away all forms of 'perversion' away from them in order to make them 'suitable wives'.

The movie doesn't beat you over the head with its feminist message but lets the drama unfold naturally. The tone is surprisingly sweet and even funny in places for a movie with such a subject matter. First time director Deniz Gamze Ergüven has a strong grip on tone; she never allows the movie to become too gritty for its own good. The girls are not defined by the plot like it's often the case with this type of movies; they have moments of laughs and happiness which never undermine the seriousness of the subject matter.

The performances from the lead actresses are phenomenal. The youngest girl blew me away - not once do you feel like she's acting. Their performances is what make them so distinctive from each other and not just stand-ins for Oppressed Muslim Girls TM like it's often the case.

Mustang is easily one of the best feminist movies of the year, proudly sitting next to The Diary of a Teenage Girl. It's sincere and heartfelt, it's not preachy but honest and it shows great premise for the future of its director.

LNG
5つ星のうち5.0 beautiful and very unique in its subject
2016年9月9日 - (Amazon.com)
Amazonで購入
Mustang is an incredible film. It's emotionally exhausting, beautiful and very unique in its subject. I'm sure many other people writing about this film are simply going to say that it's a feminist film, but we need to move past labeling any film about women who aren't subservient or "typical" as advocation and instead let the story breathe. This film isn't about an ideology -- one that is important and one that I personally believe in very strongly -- but it's about struggle and hardship shown through a child's view. Each young woman is imprisoned by extreme conservatism while they wait to be married off. The story itself is very simple but what director Deniz Gamze Erguven shows us hits incredibly hard. And even as an American woman with parents who never treated me poorly for simply being a woman, there is a strange ease in relating the film to that which you feel yourself. Our lives are different and so is our culture, but Mustang brings the frustrations of being a young woman into an incredibly visceral experience. This makes it difficult to fully review this film beyond my emotions. But I will say this: each performance from the five girls were incredible. Each had their own personality and I was amazed at was Erguven was able to bring out of them. This trend of arthouse-realism (in particular the style reminds me of Martha Marcy May Marlene) works so well within this incredibly naturalistic film. The editing and pacing feels akin to Boyhood, but of course it takes place in a much shorter span of time -- everything flows, time passes and you don't really notice, it's not so much scenes as it is fleeting moments that build up to create whole people and their struggles.

The best part about Mustang is that its perspective is entirely female, which is so refreshing, and it isn't about the tragedy of womanhood. Instead, Mustang is the story of the resilience of womanhood. Mustang is powerful and beautiful; Mustang is chilling and frustrating; Mustang is the real world for people, but I don't think Mustang is tragedy. Womanhood isn't tragedy, it's overcoming it.
続きを読む
7人のお客様がこれが役に立ったと考えています
レビュー を日本語に翻訳する

Vimala Maguire
5つ星のうち1.0 Faulty Disk
2018年10月31日 - (Amazon.com)
Amazonで購入
Did not play the DVD ordered in June 2018 until October. Disk faulty and won't play the movie. Seems to be stuck on the first few minutes of the start. Would like to replace with a working version but prompt indicates that return expired July 2018. What can I do?
続きを読む
1人のお客様がこれが役に立ったと考えています
レビュー を日本語に翻訳する
Amazon.comのカスタマーレビューを見る(77) 5つ星のうち4.3
Amazonプライム会員ならお急ぎ便、日時指定便が使い放題
さらに、映画もTV番組も見放題。200万曲が聴き放題 。クラウドに好きなだけ写真も保存可能。
> プライムを無料で試す