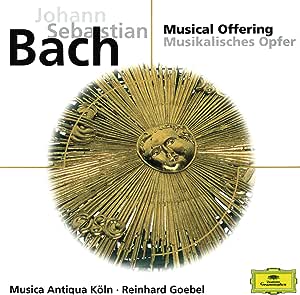 Bach's Musical Offering is One of the Most Unique Chamber Works Ever Written. For Instance Instead of a Fixed Ensemble, in Each Movement the Instrumentation Varies from a Lone Soloist to Combinations of Two to Four Musicians. As One of the Very Few Ensembles to Record all of J.s. Bach's Chamber Music the Musica Antiqua Koln Here Offer One of the Finest, Most Idiomatically Knowing, Crisply Articulated and Spirited Performances of the Work Available. Archiv's Sound as Well is Top Notch with Remarkable Acoustic Clarity and Definition.

Bach's Musical Offering is One of the Most Unique Chamber Works Ever Written. For Instance Instead of a Fixed Ensemble, in Each Movement the Instrumentation Varies from a Lone Soloist to Combinations of Two to Four Musicians. As One of the Very Few Ensembles to Record all of J.s. Bach's Chamber Music the Musica Antiqua Koln Here Offer One of the Finest, Most Idiomatically Knowing, Crisply Articulated and Spirited Performances of the Work Available. Archiv's Sound as Well is Top Notch with Remarkable Acoustic Clarity and Definition.

DAVID BRYSON
5つ星のうち5.0 THE ART OF CANON
2013年3月24日に英国でレビュー済み
Amazonで購入
Unlike The Art of Fugue, Bach's great Musical Offering is not only of manageable dimensions (three quarters of an hour long) but is also designed as a single coherent composition that comes to a coherent conclusion with a grandiose finale. Simplifying its origins a little, Frederick the Great presented Bach with a theme of his own composition and bade him improvise a three-voice fugue on it. That was no problem but it seems that even Bach baulked at the Emperor's next command, to improvise in six voices. However it was probably not good politics to seem to snub Frederick the Great, so Bach's infinite musical talent came immediately to his rescue. In short order he turned out not only the six-part effort but also ten more canons, plus a four-movement trio sonata, all based on Frederick's theme, and had it engraved and bound handsomely for presentation to the monarch.

You would not expect the Musica Antiqua ensemble of Cologne to transgress in matters of authentic style. Six players take part, and the 3-part and 6-part ricercars (sc fugues) that start and finish the work are given as harpsichord solos. We know that Bach played the 3-parter himself, and the final 6-part summing-up of the whole work is written in open score, like The Art of Fugue to that extent and also like it in being within the capacity of a pair of hands. This does not commit interpreters to keyboard-solo renderings, and in abstract `absolute' music of this kind any suitable instrumentation will do unless the composer signifies definite wishes in that respect. However it is a perfectly reasonable way to go about these two numbers and also the 2-part canon #10. Instruments exist for music after all and not the other way about. As a mildly ironic touch if we are worried about theoretically perfect authenticity, it appears that Bach was invited to give his opening performance of the 3-part fugue not on a harpsichord but on the new-fangled pianoforte or whatever they called it at the time. Musica Antiqua do not go that far, but like other performances known to me they rightly use a transverse flute, on which Frederick was proficient, and not a recorder.

It seems that the engraver jumbled the sequence of the pieces to some extent, but so far as I know there is not much dispute these days regarding their proper order. The other performance that I own has the trio sonata and the `canonic fugue in the upper fifth' (in epidiapente) swapping places. If there is any issue that need bother us in this matter I don't know what it is and don't propose to investigate so long as I am given the entire score. The entire performance is my idea of beyond criticism, and the recording is a model of tact and clarity, from 1979. There is also a bonus, equally well presented by all concerned, of two duo sonatas, recorded this time in 1983 and I suppose you might say that the sound in these is a little brighter, in keeping with the lighter character of the music.

The DG Eloquence series does not do liner notes, but there is plenty of material available at the click of a mouse button or whatever one calls the equivalent of that on laptops. There also seems to be an abundance of performances, so perhaps I should mention the other account of The Musical Offering that I own (on vinyl), as it seems to have disappeared out of the catalogues altogether although highly praised when it appeared in 1977. It is from 10 members of the Yorkshire Sinfonia led by Manoug Parikian, whose name I seem to remember as leader of one of the top orchestras. The additional instruments are three strings and an oboe, and there are no harpsichord solos. The recording is again perfectly acceptable, and the performance, not a million miles different in style from Musica Antiqua's, is still valuable to the extent that it shines a slightly different light on this great work. It makes me think that just one performance of The Musical Offering is not enough in a serious collection. If you make the obvious reply to that, namely that just one performance is what I have been getting by with for decades, all I can say is better late than never. There are many more offerings available too.