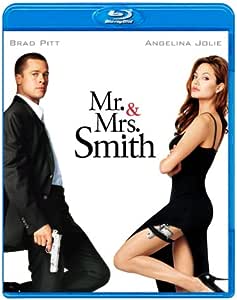 Feature-Length Audio Commentary by the Director

Deleted Scenes Including An Alternate Ending

Doug's Film School Sequence Breakdowns With The Director, Including Animatics, Storyboards And A Major Action Sequence Not Included In The Film

Behind The Scenes Documentary

Mrs. Hatter
5つ星のうち5.0 Slick Over-the-Top Ultra Violent Slapstick Romcom (Kind of)
2019年1月10日に英国でレビュー済み
Amazonで購入
Yes, the plot is slightly ridiculous/unbelievable for the most part, it's incredibly over the top and largely little more than a very good looking but far-fetched violent comedy with a slap of romance and a fairly basic story line, but I actually really enjoyed this film. It looks good, punches hard and doesn't try too hard to be anything more than the disposable stylised domestic caper that it is.

Brad Pitt (swoon) and the ever-unpopular Angelina Jolie (booo) are a married couple who are experiencing something of a lull in their marriage; everything has become a little samey and routine in their seemingly rather mundane home life, but behind the scenes, and unbeknown to each other, they are each actually secret agents working for different agencies as international hit-men/hit-women (hit-people?)! All of this is pulled off pretty well - Brangelina do a great job of portraying a marriage on the rocks and many people will recognise the very common little annoyances and sly comments, all served up with a healthy dose of well timed observational comedy and palpable tension between two of Hollywood's most shiny stars.

This would be all well and good but as luck should have it they are then each assigned a new target to wipe out which turns out to be each other. Typical! We've all been there. Forcing each to scrutinise the worth of their love/marriage more than ever before, this is the basic plot with some international conspiracy/agency fluff around it to meat things out a little as we then go on a rollercoaster of will-they-won't-they cat and mouse as the unlikely situation injects some serious juice into their marriage. This results in some genuinely funny and hyper-violent domestic violence as we watch Mr. & Mrs. Smith beat seven shades of ultra glossed sunshine out of each other, with the ever increasing tension inadvertently leading them to a reconciliation (and a well and truly wrecked homestead) and teaming up for an all-out seriously over the top high body count finale. No need to bring your gun - they have hundreds. And they use them all.

Leave your brain at the door, suspend your belief along with your very probable dislike of Ms. Jolie (why does everyone hate that woman so much!?) and enjoy the film for what it is and it will be a fun, well paced couple of hours of good looking gun-toting nonsense.

Graeme Shimmin
5つ星のうち4.0 Usually this kind of thing would fail for me, but in this case it worked.
2016年2月3日に英国でレビュー済み
Amazonで購入
Logline: When man and wife assassins discover they are working for rival agencies they have to decide whether to put love ahead of business.

Plot: The plot relies purely on momentum, set-piece action and its stars’ charisma to hold the viewer’s interest. It starts well, but, it all becomes a bit samey, and the ending is a bit of a dramatic fizzle.

Concept: This is Mr. and Mrs. Smith ‘s main strength - the central conceit is great.

Characters: Angelina Jolie and Brad Pitt are the best things in the movie: both great looking, but also good actors, delivering the comic lines in particular with great timing.

Felixcat
5つ星のうち5.0 Good movie
2018年6月5日に英国でレビュー済み
Amazonで購入
Extremely violent, but at the same time very funny story about a married couple, who are both secretly (unknown to each other) professional assassins but on opposite sides, their mission is for one to kill the other - a good movie to watch, although a little OTT at times.
続きを読む
1人のお客様がこれが役に立ったと考えています
役に立った
フィードバックを送信中...
フィードバックをお寄せいただきありがとうございます。
申し訳ありませんが、お客様の投票の記録に失敗しました。もう一度試してください。
違反を報告
レビュー を日本語に翻訳する

Mrs. B
5つ星のうち2.0 Rubbish
2019年12月28日に英国でレビュー済み
Amazonで購入
I didn't like this film at all, it was such a load of rubbish. It went straight in a charity bag. I love Brad Pitt, but this as far as I am concerned was him at his worst
続きを読む
役に立った
フィードバックを送信中...
フィードバックをお寄せいただきありがとうございます。
申し訳ありませんが、お客様の投票の記録に失敗しました。もう一度試してください。
違反を報告
レビュー を日本語に翻訳する

Lets hope that their the only couple that arguing like this.