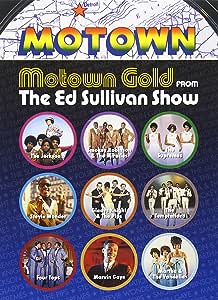 Shetland Soul Brother
5つ星のうち5.0 MAGIC!
2012年3月6日に英国でレビュー済み
Amazonで購入
Fantastic. Uk TV was still in black and white when most of these performaces were made in high quality colour (color) . It is a pity Marvin Gaye and Martha Reeves and the Vandellas only made one appearance on the Ed Sullivan Show but to see them in high quality video compared with UK archive performances is worth every penny. The green elf outfits worn by the wonderful Gladys Knight and the Pips is a different experience. Gladys could sing the Shetland Telephone Directory and I am sure it would sound brilliant. The live performance at the army hospital singing I Heard It Through The Grapevine clearly shows the gospel roots. The stand out performance has to be the Temptations Just My Imagination. They were a real boy band instead of the drivel the UK has had to put up with for the last two decades!
続きを読む
5人のお客様がこれが役に立ったと考えています
役に立った
フィードバックを送信中...
フィードバックをお寄せいただきありがとうございます。
申し訳ありませんが、お客様の投票の記録に失敗しました。もう一度試してください。
違反を報告
レビュー を日本語に翻訳する
その他の国際レビューを読み込む

S. Paradoa
5つ星のうち4.0 A Must Have For Classic Motown Fans
2011年9月20日にアメリカ合衆国でレビュー済み
Amazonで購入
There are no liner notes so here are the original air dates for each of the 41 full length performances included on this two DVD set. Many include Ed's original intro as well as his shaking hands with the group afterwards. This time there is no extra narration added (previous releases on VHS/DVD included narration). Many of the clips have been released prior. All eight performances by the Temptations also appear on their Best Of DVD. Of the twelve Supremes clips six are included on their Best Of DVD as well.

Volume 2
1. The Jackson 5: Stand!, Who's Lovin' You, I Want You Back December 14, 1969 First time all three songs appear on DVD unedited.
2. The Supremes: Come See About Me December 27, 1964 Here in black & white as originally aired. A colorized version was previously released on VHS/DVD.
3. Stevie Wonder: For Once In My Life December 15, 1968 His second and final Sullivan appearance.
4. Martha & The Vandellas: December 5, 1965 Dancing In The Street Their only Sullivan appearance.
5. The Temptations: Get Ready January 31, 1971
6. The Supremes: My World Is Empty Without You February 20, 1966
7. The Four Tops: Medley: When You're Smiling, It's The Same Old Song, Something About You, I Can't Help Myself (Sugar Pie, Honey Bunch) January 30, 1966 Their first Sullivan appearance. Included here unedited for the first time on DVD. Previous releases edited out the first song.
8. The Miracles: Abraham, Martin & John June 1, 1969
9. The Supremes: Medley: Come See About Me, Stop! In The Name Of Love, You Can't Hurry Love, You Keep Me Hangin' On, I Hear A Symphony December 4, 1966. Five song hits medley with Florence Ballard makes it's first ever DVD debut here.
10. The Temptations: Runaway Child, Running Wild February 2, 1969
11. The Supremes: Love Is Like An Itching In My Heart May 1, 1966
BONUS
14. The Four Tops: It's All In The Game November 8, 1970
15. The Four Tops: Nice `n' Easy January 30, 1966 First time ever on DVD, this clip really shows off the group's wonderful harmonies.

At least 30 of these clips have shown up prior on VHS/DVD. At least this time the sound and picture are improved. They could have added a Volume Four with all of the remaining performances that have not been seen since originally aired, as well as a few that have already appeared before but were not included this time around. Four clips that were on previous volumes of Ed Sullivan's Rock `N' Roll Classics but missing here are:

Russell Morris
5つ星のうち3.0 old school entertainment
2014年4月27日にアメリカ合衆国でレビュー済み
Amazonで購入
This was a blast from the past and I was curious to see if I would remember some of the performances, most of them I didn't ,but it was interesting to see how the fashions and routines that were so raved about during that era seemed stiff compared to the acts of this modern day generation, no disrespect for they were the ground breakers that opened the doors for new talent of today ,it just shows how the industry as progressed from the past and is always supposed too. The raw talent is evident in some of the performances and I will never tire of seeing little Michael Jackson doing his thing. This is good material to teach the younger generation where it all started, if they would be interested in learning about old school entertainment.
続きを読む
1人のお客様がこれが役に立ったと考えています
役に立った
フィードバックを送信中...
フィードバックをお寄せいただきありがとうございます。
申し訳ありませんが、お客様の投票の記録に失敗しました。もう一度試してください。
違反を報告
レビュー を日本語に翻訳する