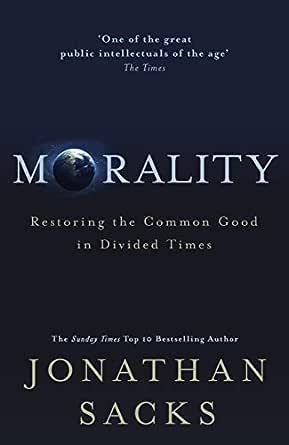 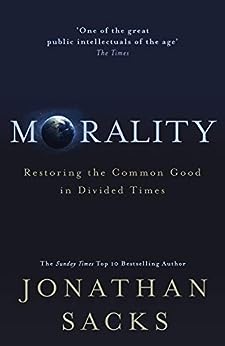 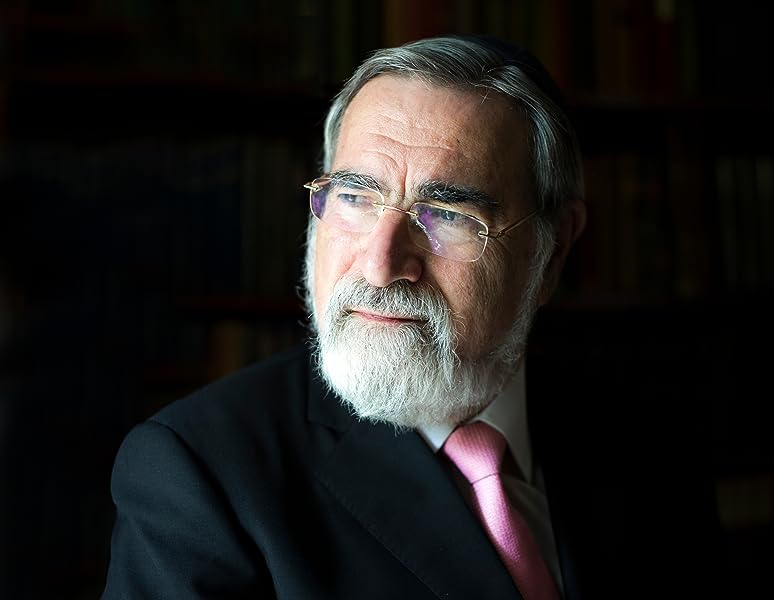 The inheritor of a tradition with a long historical memory of loss, exile, death and mourning, Sacks has things to say that speak more directly to our present condition than anything in recent liberal thinking. * New Statesman * 'Sacks argues convincingly that this pursuit of the common good has been disappearing from the West, and has left us impoverished and damaged.' * Jewish Renaissance * The strength of Morality does not reside in Jonathan Sacks's discussion of political and philosophical theorists, but in those passages in which he speaks to us as rabbi and community leader. * TLS * Sacks presents an articulate and impassioned argument . . . He is a fine exegete of the Hebrew Scriptures, and his belief in the common good is profound. * Reform * Sacks unpacks a whole litany of dystopian trends arising from our relentless preoccupation with me, me, me * Premier Christianity * Jonathan Sacks is one of the great moral thinkers of our time. His latest book, Morality, applies his powerful approach to the unprecedented challenges of our time - social, political, economic, and above all, cultural. May his words be heeded throughout the land. --このテキストは、paperback版に関連付けられています。

An international religious leader, philosopher, award-winning author and respected moral voice, Rabbi Lord Jonathan Sacks was awarded the prestigious Templeton Prize in 2016 in recognition of his work in affirming life's spiritual dimension. He is a frequent and respected contributor to radio, television and the press in Britain and around the world. Rabbi Sacks served as Chief Rabbi of the United Hebrew Congregations of the Commonwealth from 1991 until 2013 and has held a number of professorships at universities in Britain, the United States and Israel. He is the author of over 30 books, including the Sunday Times bestseller Not in God's Name: Confronting Religious Violence, The Great Partnership: God, Science and the Search for Meaning, and The Dignity of Difference: How to Avoid the Clash of Civilisations. --このテキストは、paperback版に関連付けられています。

trini
5つ星のうち2.0 Much excellent comment on today's politics and economics, but no definition of 'morality'
2020年4月12日に英国でレビュー済み
Amazonで購入
I bought this book (hardcover copy) a couple of weeks ago, and have since read it rapidly right through a couple of times.

I thoroughly enjoyed the frequent quotations of statistical analyses of how leaders, and the common mass, viewed and now differently-view the world they live in, society, neighbourliness, politics, the business world, etc., and how there has been that massive change from a centuries-long commmon belief in a religion-based 'morality' to the present very common view that 'every individual is entitled to make up his own morality'.

This leads me to say immediately that the book desperately needs a detailed Glossary and a detailed Index. Over and over again the same or similar ideas and authors crop up; also, repeatedly Sacks spells out two, or three, or more, elements in a given belief or practice, often with very significant differing effects. These generally need more clear-cut definition than Sacks gives. His 'Notes' to his text, and recommended 'Furher Reading', do not supply the ready-to-hand powerful summary that a glossary and index would provide.

Also I consider as a very serious weakness in Sacks's book that he does not seriously define the word 'morality'. He tosses in the word all the time, and of course it is the title of his book, but several times he makes a suggestion that human beings finally 'evolved' from being mere hunter-gatherers to being substantially more numerous tribes, communities, states or nations or whatever, and Sacks keeps hInting that 'religion' as we know it generally today, with its rituals and priesthoods and assemblies, was really CREATED by the growing human communities. GOD is mentioned, but his involvement is not seriously developed.

Sacks is well-read in his Nietzsche and Sartre and Camus and so on, but there is only (I think) one brief reference each, to Hawking and to Dawkins, and I believe that the views of these two, and the multitude of their misguided followers, that the universe(s) self-created out of nothing according to the non-existent laws of non-existent nature, is the most calamitous disaster in the whole realm of rational human thinking. Sacks does not explicitly attack, or indeed deal with, the view that we human beings evolved by blind chance from the slime of the earth and that we are no more than one element of a meaningless universe of brute matter. But on page 290 Sacks says: ''The birth of religion in this sense
was the birth of civilisation''.

Sacks does not sufficiently define what is human nature, and what is religion. On page 299 he says: ''Religion creates communities, and communities create moral people''. But Sacks does not tell us '''who creates religion''.

There is a basic failure on Sacks's part to discuss human nature, and the human Person. As I keep saying in all my reviews of books on this topic, both when I attack the views of Hawking/Dawkins, and when I praise books which source my pro-religion, pro-Christian views, an analysis of the human condition is essential. Sacks's emphasis in his book is that human beings need a ''WE'', a community-and family- approach to life, and not the ''I'' approach favoured by the politics-and-business-is-all-that-matters philosophy of life . But Sacks does not develop the essential point, that the person living the 'WE'' approach is always a rational, human ''I''. As I put it, in my reviews, the central feature of any study of the 'Grand Design' according to which mankind must act, must be this: ''To explain the self-conscious, rational, scientific, mathematical, cosmological, psychological, biological, logical, philosophising, theologising, artistic, musical, poetic, literary, remembering, planning, loving, hating, altruistic, selfish, sexual, racial, moral, immoral, believing, hoping, value-and-purpose-seeking, family-centred, God-fearing peak-of-creation human being.

I am sorry to be so critical of Sacks's views. He can sympathise with the modern acceptance of views not his own, with freedom of belief and practice, and so on, and he powerfully identifies the harm to proper, ordinary thinking, which is caused by the overwhelming effect of universal electronic communications, where the views of the ill-informed or malicious have as much effect as the views of the seriously philosophical and theological and scientific - on these topics Sacks is excellent.

But Sacks almost always practically identifies 'morality' simply with having a sympathetic, tolerant attitude towards one's neighbours who hold different views from one's own.

And he does not give sufficient emphasis to considering that a belief in some form of morality can/must be true, and that some form/s of morality must be rejected, albeit with love towards and respect for the individual/s holding the 'wrong' views. I like to quote the case of the attitude attributed to Voltaire, who tells one of his adversaries: ''I disapprove of what you say, but I will defend to the death your right to say it''. I tend now, when I quote this humane attitude of Voltaire's, to put into Voltaire's mouth the further key statement: ''And in return you must defend to the death my right to say and to attempt to prove that what you say is logically, rationally false, if that is my conviction''.

I must stop for now. One facility that used to appear in amazon book-reviews was the option to ''see all the reviews published by this reviewer''. I have said a good deal more on this topic in my reviews of Hawking and Dawkins, for example, which would be relevant here.
続きを読む
14人のお客様がこれが役に立ったと考えています
違反を報告
レビュー を日本語に翻訳する

Bookworm
5つ星のうち5.0 An antidote to self
2020年3月25日に英国でレビュー済み
Amazonで購入
When I was younger, my only knowledge of Jonathan Sacks as through his contributions to Radio 4's 'Thought for the Day' - and I have to admit that I found him a bit stuffy and earnest. About 10 years ago this changed: I don't know if he changed or I did - or we both did - but I started realising that he was a man of wisdom, humanity and insight whose words were well worth litening to or reading.
The reason I mention this is that the general idea of Morality is as something a bit stuffy and earnest. Jonathan Sacks here shows that it if understood and applied correctly it is no such thing: It is life enhancing, not life denying. That understanding alone is worth many time the cover price. Read it!
続きを読む
10人のお客様がこれが役に立ったと考えています
違反を報告
レビュー を日本語に翻訳する

Professor Magellan
5つ星のうち5.0 A superb book for our troubled times.
2020年6月13日に英国でレビュー済み
Amazonで購入
A most interesting and readable book. Beautifully written. Very relevant for the modern era with its obsession with “social media”. Lord Sachs is one of our greatest thinkers. One small gripe: Lord Sachs praises the virtues of a well known Venture Capitalist who is infamous for his tax avoidance - mention of this highly controversial and widely disliked individual should perhaps be removed from future editions. There must be better and more worthy examples of “impact investors”.
続きを読む
違反を報告
レビュー を日本語に翻訳する

Henry Dark
5つ星のうち5.0 Thought-provoking and timely
2020年8月28日に英国でレビュー済み
Amazonで購入
A thought-provoking and timely book. It is beautifully written and insightful. I found myself in agreement with much of what I read. Despite the overall picture of a divided and dysfunctional society the book offers plenty of ideas and examples of how and why this could and should be different. Ultimately this was an uplifting read which has the potential to make a positive difference to the status quo.
続きを読む
違反を報告
レビュー を日本語に翻訳する

Dr S Crisp
5つ星のうち4.0 Great read from Sacks
2020年8月3日に英国でレビュー済み
Amazonで購入
Up to date view on morality. Much food for thought especially on the effect of social media and the value of family life. The latter I consider the highlight. Probably a bit reticent on the role of faith.
続きを読む
違反を報告
レビュー を日本語に翻訳する
すべてのレビューを参照します
click to open popover
Amazonプライム会員ならお急ぎ便、日時指定便が使い放題
さらに、映画もTV番組も見放題。200万曲が聴き放題 。クラウドに好きなだけ写真も保存可能。
> プライムを無料で試す