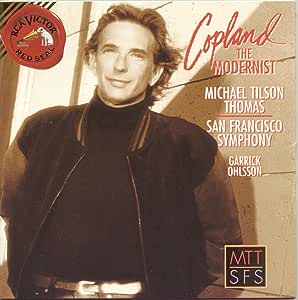 The material covered on Copland the Modernist offers an important--and highly enjoyable--counterweight to the icon of folksy Americana that the composer is usually made out to be. And though such works as Appalachian Spring and Rodeo have kept Copland high on the list of the 20th century's most popular composers, his achievement extends well beyond the familiar beauty of those musical landscapes. Michael Tilson Thomas, who has evolved into arguably the finest American conductor of his generation, has a special affinity for American maverick composers, and the selections here represent Copland as a probing artist who made his own impression straddling the popular-classical divide. In fact, Copland's later experiments in serialism were simply a natural development of his restless curiosity, of which these early assimilations of jazz into a symphonic idiom are excellent examples. Tilson Thomas manages at the same time to convey the heady inspiration from European models and the sense of embarking on a brave new world that went into the Short Symphony and Symphonic Ode (composed for the Boston Symphony). This is spectacular, spiky, incisive playing by a great American orchestra of a great American composer. --Thomas May

jt52
5つ星のうち5.0 Aaron Copland 1926-1933
2013年4月17日にアメリカ合衆国でレビュー済み
Amazonで購入
This fine 1990s disc from Michael Tilson Thomas and the San Francisco Symphony covers compositions by Aaron Copland during a short period in his life between 1926 and 1933, right after the artist had emerged to some level of artistic prominence but before he became a true musical icon. The works are at times jazz-influenced, like the earliest of the featured compositions, the Piano Concerto, but most are more modernist than the scores from the late 1930s and 1940s that form Copland's most famous achievement. Despite these varied influences, Copland always maintains a very strong musical identity: "white note" harmonies, a liking for melodies with even rhythms, transparent orchestration. That's true of the concerto here, the 2nd symphony or later, more "populist" works such as Appalachian Spring and Rodeo.

Featured here are the 1926 Piano Concerto, done with Garrick Ohlsson as soloist, the 1929 Symphonic Ode - the only music here I found truly weak (I would have preferred they include the Organ Symphony as an alternative) -- a 1950s orchestration by the composer of his Piano Variations from 1930, and the short 20-minute-long 2nd symphony, completed in 1933. The Piano Concerto is an example of the 1920s jazz crossover work like Darius Milhaud's beautiful "Creation of the World" or the Ernst Krenek opera "Jonny spielt auf". Its soft opening movement transitions into a brasher second movement heavily reliant on a bluesy minor-third motif. While I have never understood the acclaim the Piano Variations have received, I think Copland's orchestration found here makes the best case for a piece which retains its interest. I have similar feelings from the 2nd "short" symphony - it's a work that I don't consider a great one yet I consistently looked forward to hearing it on this disc.

I don't think any of the compositions on this disc are true masterpieces but despite that really enjoyed repeated listening of three of them and credit both the music itself and the very musical, tight performances by Tilson Thomas & the SFSO. Tilson Thomas in my experiences likes to take a more relaxed interpretive approach that concentrates on details rather than intensity. I think this predilection serves Copland well. The very good sonic engineering on the disc helps the final result.

M. Balthrop
5つ星のうち5.0 Serious Copland Lover's Delight
2013年3月27日にアメリカ合衆国でレビュー済み
Amazonで購入
When I think "Modernist," I tend to think of early-mid 20th century atonality for atonality's sake. That's not what this is. Copland's young artistry is shown here. Of course the brilliant interpretation from Thomas and execution by the SFS display these compositions in the best possible light. All in all, I'd say this is Copland for people over 40 years old.
続きを読む
違反を報告
レビュー を日本語に翻訳する

Amazon Customer
5つ星のうち5.0 Fine performances
2013年2月3日にアメリカ合衆国でレビュー済み
Amazonで購入
I bought this to fill in a couple of gaps in my Copland recordings. To me, the performance with Tilson Thomas and the SFSO are every bit as good as those by Bernstein. And the recording is quite good. Ohlsson fits well with the orchestra. This is a CD that I highly recommend for casual listening as well as for study and comparison.
続きを読む
違反を報告
レビュー を日本語に翻訳する