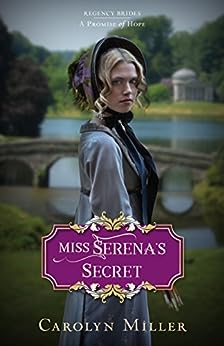 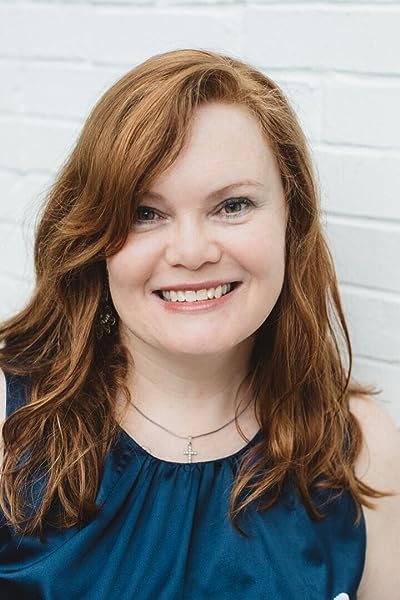 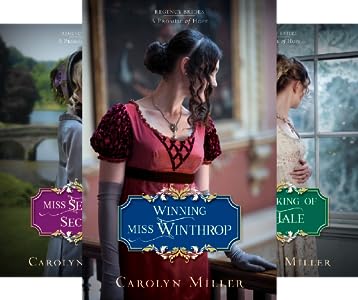 Award-winning author Carolyn Miller lives in the beautiful Southern Highlands of New South Wales, Australia. She is married, with four gorgeous children, who all love to read (and write!).

A longtime lover of Regency romance, Carolyn's novels have won a number of Romance Writers of American (RWA) and American Christian Fiction Writers (ACFW) contests as well as the Australian Omega Christian Writers Award. She is a member of American Christian Fiction Writers and Australasian Christian Writers. Her favourite authors are classics like Jane Austen (of course!), Georgette Heyer, and Agatha Christie, but she also enjoys contemporary authors like Susan May Warren and Becky Wade.

Her stories are fun and witty, yet also deal with real issues, such as dealing with forgiveness, the nature of really loving versus 'true love', and other challenges we all face at different times.

Her books include:
Regency Brides: A Legacy of Grace
The Elusive Miss Ellison
The Captivating Lady Charlotte
The Dishonorable Miss DeLancey

Vicky Dedda
5つ星のうち5.0 ANOTHER BEAUTY
2018年11月28日にオーストラリアでレビュー済み
Amazonで購入
What a wonderful book Miss Serena's Secret was. I just love Carolyn Miller's books, I have read them all and they don't disappoint. The most wonderful thing is that they are stand alone (I only read stand alone series) but Carolyn brings back the people we love from previous books so we feel like we are still in their lives. This book is wonderful as Serena is so straight forward and honest, she doesn't annoy you by hiding things, she has face such trauma in her young life and yet she faces her past with openness, a remarkable trait. You will fall in love with Henry Carmichael (Lord Carmichael) who is witty and handsome and who just wants to be the man everyone would be proud of. The book is great reading, you are immersed in to the story and the best part is at the end we meet Julia again to bring in the next book which has just been released "The Making of Mrs Hale". Enjoy, I know you will.
続きを読む
違反を報告
レビュー を日本語に翻訳する

“Dearest Serena, how I wish you knew that I am yours to command, that I am … yours.”

Carolyn Miller always manages to enchant me, and this is no exaggeration. There is a sincerity in her writing that makes it so endearing. This is a story with many twists and turns, some surprises and yes, the secret. To be honest, it took me a while to actually figure out what exactly the secret was from the many elements of Serena’s side of the story, but it is quite interesting going through all the aspects of it. And of course, this is a story of Hope, which is evident in both Serena and Harry’s hearts. Plot wise, it is not very complex, I felt. Character development is significant, especially in the case of Harry. It is the story of accepting the other person as they are with all their aspects as well as changing for the sake of becoming worthy of someone. Two contrary aspects, but well blended in the story.

“There is nothing quite like the feeling of expressing one’s creativity.”

As her name implies, Serena is indeed serene. She has a subtle modesty and is a lovely blue-eyed beauty. She has a look of aloofness, a customary implacability that makes people think, she doesn’t feel anything, she’s cold. Also, she’s a masterful artist, bearing exceptional inborn talent. Further, she is honest and vulnerable, but she bears a strength of character. She is uneasy, yet remarkable and honest, innocent and fighting her attraction for Harry, is clearly not self-seeking, but seeks others benefit above her own, but doesn’t trust men and detests gambling, Through her character, we see the challenges a female artist of the time had to face.
She has a different bond with Henry and she trusts him enough to share her secret with him.

“Was it his carefree manners, his sense of ease with everyone, the way he walked into a room and seemed to expect everyone to lavish him with attention? Perhaps it was the way he talked…”

“Lord Carmichael was something of a paradox: an affectionate uncle, a foppish dandy, a gallant gentleman whose warm interest earlier had almost made her see just why Jon valued his friendship…..more in keeping with his rakish reputation…”

Viscount Henry Carmichael is a handsome charmer with his humour and consideration for others. He’s an honourable, ambitious, jaunty, conscientious man, ashamed of his past behaviour and laden with guilt. He’s a man of society, conceals his hurt, respects his father. But he also has hidden depths. Being with Serena has a positive influence over him. She makes him want to be a better man, he is more playful with her, and regrets his youth’s follies even more. He goes above and beyond in trying to make her feel comfortable with him. He has that seeing eye that sees beyond the polished veneer to the person below, and he is a shrewd judge of character. He is a very natural character and experiences envy, but at the same time doesn’t want to be the cause of more pain in Serena’s life. He keeps fighting their attraction, he is gentle yet firm and wants more than anything to prove himself to her. And Serena’s belief in him fuels fresher resolve in him to achieve his dormant dreams.

“It was rare to meet someone who drew forth pieces of his heart he’d had no intention of sharing, whose conversation could hold his attention as much as her face did.”

“He’d long found her outward appearance appealing, but what he’d witnessed these past weeks in her kindness to her sister, her patience with Melanie’s children, her quick wit, and her trusting him just now, made her seem like she had become an unlooked-for friend. It was ridiculous, considering their disparity in age and fortune, but this surge of protectiveness, these tender feelings she evoked, made her seem infinitely more precious.”

“…viscount had seemed strangely trustworthy, strangely safe, someone whose open kindness helped her to see him as deserving the regard Jon held for him. What kind of man could irritate her so much then look at her so kindly she wanted to weep?...”

“Miss Serena Winthrop was everything he wished for: pure and passionate and clever. Someone who understood him; someone who shared his faith, his humor; someone who seemed to believe in him. How he wished it was time to speak of his feelings; he ached with the very effort of holding back. But caution prompted him to withhold a declaration. She wasn’t ready. Yet.”

“Nobody else filled his heart as she did; nobody could.”

I know those are like too many quotes from the book, but they are so beautiful I couldn’t help but share them here. They are also serving the purpose of highlighting their feelings for each other, which try as I may, I couldn’t put it in better words.
Sometimes puzzling and on others quite vivid are their affections for each other. There are invisible ties between them and also a distinct camaraderie. He has the ability to make her laugh while she is capable of exciting a change within him. They have this shared appreciation for the ridiculous.
But somewhere deep, deep within he feels he is not right for Serena because he thinks she is too young and too innocent. And he thinks he was too scarred by experiences she need never know about.

Even through MSS, we do get to meet old friends in the form of Nicholas, the Earl and Lavinia, Countess of Hawkesbury and Lady Harkness. And of course, Jonathan Carlew Winthrop and Catherine Winthrop! The secondary characters I absolutely loved were those of the Dowager Countess of Bevington and Ellie and Tom. Melanie, I had mixed feelings for her, but I can only say her behaviour was most natural and human for me to be harsh in judging her. And as for the Dowager Lady Winthrop, well, she was as ingratiating to my nerves in MSS as she was in Winning Miss Winthrop. And Mrs. Milsom? I wanted to throttle her. Plain and simple 😊

London is my most favourite of locations in a book and along with Derbyshire, it gave the book a very picturesque and delightful appearance. The description of the valleys and terraces and the ‘Treasure’ in the book are splendid and I found myself longing to visit such a place, fictitious though it may be.

Overall, as always, I found Miller’s book a delight to read. Her writing has a certain charm, her characters are well rounded and human, period details exceptional and writing engaging with a distinct wit. I admire her way of conveying emotions, of feelings. I have been a fan since I read the first page of The Elusive Miss Ellison, and I believe I always shall remain one.
And as for Miss Serena’s Secret….. well, you’ll have to go get the book and read it to find out ;p

Dave G
5つ星のうち5.0 Another great read....
2018年8月5日にオーストラリアでレビュー済み
Amazonで購入
Yet another great read from this talented author. Her ability to take the reader to another place and time and to immerse one in the story continues to amaze me. The books get better each time and i am looking forward to the next installment
続きを読む
違反を報告
レビュー を日本語に翻訳する

Jenny
5つ星のうち4.0 A good read for fans of Christian regencies
2018年8月30日にアメリカ合衆国でレビュー済み
Amazonで購入
I enjoyed this novel. The author clearly put a great deal of research into most of the details. (I will point out an error found in this book that is common in this genre...children of the era had nurses and/or governesses, the title of nanny did not come into use until later.) Overall, it is an engaging story with clean content. There are clear religious themes woven throughout. By the end I did feel a little obstacle-fatigue as it seemed that there had been so many compounding trials thrown at the hero and heroine. I would have been happy to have had a few less.
続きを読む
3人のお客様がこれが役に立ったと考えています
違反を報告
レビュー を日本語に翻訳する

LJ
5つ星のうち4.0 I have enjoyed ALL of this author's books
2018年12月27日にアメリカ合衆国でレビュー済み
Amazonで購入
I liked this one better than her last one, but oddly, I actually JUST read it about three weeks ago and can't remember much of the story. Sorry. I rated it four to be fair mostly because this author has proven she can turn out multiple decent stories. Her writing style is just shy of being excellent. As I write this, I am recalling more, I vaguely recall that the heroine' s "bad" experience seemed a bit overdone (other reviewers commented same). I won't add a spoiler, some other reviewers were a bit more forthcoming. I just wasn't convinced what she experienced could produce that much angst unless the person was mentally unbalanced, which she was not. But the hero was great.

So far, while I have enjoyed the first one of her novels the very best (miss Ellison), All are well-written and anticipated the release of each one.

These novels should DEFINITELY be read in order. While the first three are somewhat independent from the second series, characters reappear and I highly doubt it would be easy to really enjoy the character interactions without at least reading the first one (miss Ellison' s story) and the one right before this (Serena' s sister's story.
続きを読む
違反を報告
レビュー を日本語に翻訳する
すべてのレビューを参照します
トップへ戻る
Amazonについて
Amazonでビジネス
Amazonでのお支払い
ヘルプ＆ガイド
日本語ショッピングのための言語を選択します。 日本ショッピングのための国/地域を選択します。
© 1996-2020, Amazon.com, Inc. or its affiliates