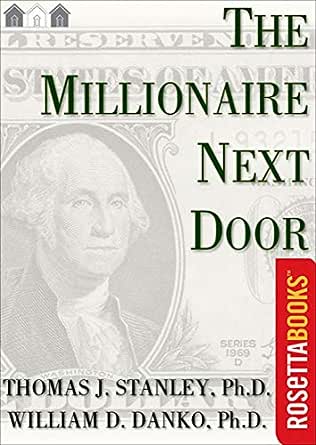 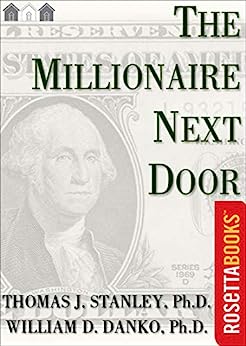 How do the rich get rich? An updated edition of the “remarkable” New York Times bestseller, based on two decades of research (The Washington Post).

Most of the truly wealthy in the United States don’t live in Beverly Hills or on Park Avenue. They live next door.

America’s wealthy seldom get that way through an inheritance or an advanced degree. They bargain-shop for used cars, raise children who don’t realize how rich their families are, and reject a lifestyle of flashy exhibitionism and competitive spending. In fact, the glamorous people many of us think of as “rich” are actually a tiny minority of America’s truly wealthy citizens—and behave quite differently than the majority.

At the time of its first publication, The Millionaire Next Door was a groundbreaking examination of America’s rich—exposing for the first time the seven common qualities that appear over and over among this exclusive demographic. This edition includes a new foreword by Dr. Thomas J. Stanley—updating the original content in the context of the financial crash and the twenty-first century.

“Their surprising results reveal fundamental qualities of this group that are diametrically opposed to today’s earn-and-consume culture.” —Library Journal

How can you join the ranks of America's wealthy (defined as people whose net worth is over one million dollars)? It's easy, say doctors Stanley and Danko, who have spent the last 20 years interviewing members of this elite club: you just have to follow seven simple rules. The first rule is, always live well below your means. The last rule is, choose your occupation wisely. You'll have to buy the book to find out the other five. It's only fair. The authors' conclusions are commonsensical. But, as they point out, their prescription often flies in the face of what we think wealthy people should do. There are no pop stars or athletes in this book, but plenty of wall-board manufacturers--particularly ones who take cheap, infrequent vacations! Stanley and Danko mercilessly show how wealth takes sacrifice, discipline, and hard work, qualities that are positively discouraged by our high-consumption society. "You aren't what you drive," admonish the authors. Somewhere, Benjamin Franklin is smiling.

Eva
5つ星のうち4.0 Good read with some good lessons.
2020年1月19日 - (Amazon.com)
Amazonで購入
I enjoyed this book as it gave me some insight to an are I am not familiar with. It has changed some of my personal viewpoints on what is important and reinforced what I’m already doing well. I recommend reading this book if you’re interested in growing wealth. This book will give you some direction to go if you don’t already have some. I took 1 star off because it’s a little bit boring.
続きを読む
レビュー を日本語に翻訳する

Amazon Customer
5つ星のうち1.0 Questionable data
2020年1月20日 - (Amazon.com)
Amazonで購入
I wish I had considered the publication date before buying the book. The ideas were ok but the backup data out of date. Too many "dumb" examples of cars, inheritance goals,occupations! The worst case the stupid dog story at the end of the book. My recommendation is to SAVE your money. Do not buy the book.
続きを読む
レビュー を日本語に翻訳する

Brice and Natalia
5つ星のうち5.0 Good overview of a class of people
2019年12月27日 - (Amazon.com)
Amazonで購入
This is one of the rare books that I read within two days. It gave me an insight of how people get their riches and pass down their knowledge to the next generation. Overall, a great read. Some of the data points might be dated, but the overall message was spot on.
続きを読む
レビュー を日本語に翻訳する

R. Rodriguez
5つ星のうち2.0 Too much bluff
2020年1月12日 - (Amazon.com)
Amazonで購入
There is too much bluff and endless details to stories even after the point of the story had been made.
続きを読む
レビュー を日本語に翻訳する

Nancy
5つ星のうち3.0 Common sense.
2019年11月12日 - (Amazon.com)
Amazonで購入
A fairly good book, but could have been summed up in a single sentence.

"Save your money, and don't be too image conscious. "

Of course, that single sentence would not sell millions of books, and make the author a millionaire.