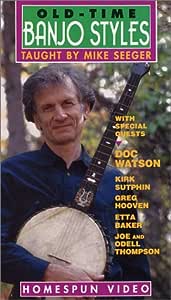 Tony Thomas
5つ星のうち5.0 Essential for a banjoist
2005年6月6日 - (Amazon.com)
Generally old time banjo instruction tends to be a very dogmantic, tunnel vision repetition that there is just one or another varient of clawhammer with a teacher showing that his or her way is the only way. Mike Seeger knows too much about real old time music learned from the old pickers and young, to have this approach here. This is a small--his three video set is the major--catalog of different banjo styles including finger picking and clawhammer, and astyle or two that go between.

What is also interesting is that Mike not only feaures other players, but interviews those players about playing banjo, music and their banjos, all pretty interesting and revealing. As a 40 year plus Doc Watson fan, I was impressed to hear the Doctor talk about his own banjo playing and the different styles he learned from his Dad. Watson is honest to say that he could never really figure out drop thumb frailing and that he really fakes the drop thumb style with pull on and pull offs and other picking. It was also nice to see him doing thumb lead picking on Willie Moore, a song of his I have loved since around 1971.

Likewise it was wonderful to see Kirk Sutphin and Greg Hooven two younger musicians playing banjo and fiddle and talking about playing and also talking about how individual styles developed. They were both informative and very positive to the beginner or the learner. Of course as an African American banjoist and fan, I was really please to see Etta Baker play several of her specialities, and to Joe and Odell Thompson on DVD when Odell was still living. Bob Carlin does a great job playing with Joe, but both Joe and Carlin point out it is nothing like Jo and Odell.

Of course Mike Seeger is here himself playing his banjo, instructing songs, singing and being his clear, informed, and respectful of the music and the cultures that made it self.

There is also a cameo appearance by the late Ralph Rinzler who launched the folklife program at the Smithsonian, helped bring Doc Watson and Bill Monroe to the folk music audience, was a great guitarist and mandolin player and singer with the Greenbriar Boys and was a real power along with Mike in doing the hard work that made both traditional artists and the old string band recordings available to new generations in the 1960s and 1970s.

To be sure, this is not a how to play the banjo video for a brand new banjoist. The video focuses on showing a variety of styles and players. This also means that it is quite entertaining and can be enjoyed by anyone who likes good music and like to hear interesting people talk about what they love.