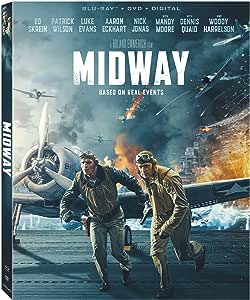 Alan F. Sewell
5つ星のうち5.0 Excellent reality film of the Battle of Midway
2019年11月10日 - (Amazon.com)
I grew up in the 60’s and 70’s and heard all about the Battle of Midway from my father, a WWII vet. I read a lot about it too, in books like John Toland’s THE RISING SUN. I remember the 1976 Movie MIDWAY with the stellar cast of Charlton Heston , Henry Fonda , James Coburn Hal Holbrook, Robert Mitchum, Pat Morita, and Glenn Ford. I expect many will measure this 2019 movie by the 1976 classic.

I think the 1976 movie tells the “big picture” a little better and is more packed with personal drama due to the stellar acting qualities of the cast. The flamboyant personalities of the U.S. and Japanese commanders were vividly dramatized by the best actors of the day. That’s fine, because those people were flamboyant, so that movie was true-to-life.

However, the producers of this 2019 movie wisely decided not to duplicate the personality profile acting of the 1976 version. This movie is weighted more to the reality stories of the Navy men and pilots who fought the battles, with the “big picture” layered on top of that.

The scenes of battle, preparation of battle, and the counting of costs of dead and wounded after the battles are shown magnificently from the perspectives of the servicemen and their families. Perhaps about half the film is combat scenes, filmed spectacularly with aircraft and ships from the 1940’s. So, you feel as if you were a participant in going to war with the equipment of that era.

The most powerful emotionally-charged dramatic scenes are nicely tied together at the end. It’s realistic in showing the heroism of both sides without white washing the barbarity of the Japanese on some occasions, such as dealing with two shotdown American pilots the Japanese captured during the battle. I did not see anything that would be objectionable for children to see --- no gratuitous sex or offensive language.

It’s an excellent movie to understand what happened at Midway, what the stakes were for the United States, and what they meant to the men who fought and died there.

RJ from Reno
5つ星のうち5.0 Great Achievement.
2019年11月11日 - (Amazon.com)
I hesitated going to see this movie and was prepared to groan to see just how far Hollywood would go to appease the political correct police.

Instead this movie was awesome at portraying the men of the US Navy who fought and died in the dark early days of the war in the Pacific.

It also spotlighted the Japanese atrocities and actions properly. The country of Japan and it's leaders were every bit as bad and criminal as the Nazi Germans. They genocided the Chinese and their soldiers systematically murdered, raped, and enslaved millions.

The movie had the audience captivated and on the edge of their seats from start to finish. A scale of a movie but not difficult to follow and keep track of the players.

Great achievement, Thank you veterans., I am proud of my country.
続きを読む
241人のお客様がこれが役に立ったと考えています
レビュー を日本語に翻訳する

R. Wise
5つ星のうち1.0 Not historically correct.
2020年1月3日 - (Amazon.com)
I shake my head at people who have absolutely no idea about history can watch this film and claim that it’s a “Great movie about history”. This latest attempt at telling the epic Midway battle is rife with inaccuracies. A couple of them are inexcusable. On the lesser side of the errors, the early raids on the Marshalls and Gilberts shows aircraft flying over mountainous terrain. These islands have no high terrain. And the TBD’s that are depicted in these raids are shown carrying bombs and torpedoes, all the while in incorrect insignia. Never in the service life of the Devastator did it ever carry both types of ordnance at the same time. Separately yes, but never together. But the real travesty in this film comes in the form of three glaring inaccuracies. The first deals with the deaths of O’Flaherty and Guido. The film has both men dying on the day of the battle. In truth, they were captured and brutally tortured by the Japanese for two weeks before being weighted down and thrown into the ocean. Why hide the truth? Was the movies’s director and producers playing to the sensitivities of their Japanese cohorts during the making of the film? The second embellishment comes in the portrayal of Dick Best. He was never the hot dog and combative pilot as Ed Skrein portrays him to be. This isn’t Skrein’s fault, but with the poor writing of Wes Tooke. The third inaccuracy, and the one that really upset me was there is no mention of Admiral Frank Jack Fletcher during the battle. He was the tactical commander of the U.S. fleet during this engagement. The movie erroneously depicts Admiral Spruance as the tactical lead in the battle. He only assumed this role as Fletcher was abandoning the sinking Yorktown, some hours after three of the four Japanese aircraft carriers were destroyed. This is an ugly disservice to Fletcher’s contribution to the ultimate victory. Really, really bad form.
続きを読む
227人のお客様がこれが役に立ったと考えています
レビュー を日本語に翻訳する
Amazon.comのカスタマーレビューを見る(321) 5つ星のうち3.7
Amazonプライム会員ならお急ぎ便、日時指定便が使い放題
さらに、映画もTV番組も見放題。200万曲が聴き放題 。クラウドに好きなだけ写真も保存可能。
> プライムを無料で試す