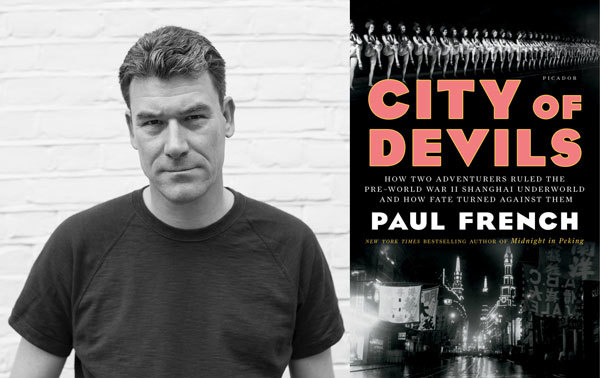 An instant true crime classic. Grips from the first page to the last -- David Peace, author of Red Riding and The Damned United

Fascinating and irresistible. I couldn't put it down -- John Berendt, author of Midnight in the Garden of Good and Evil

Written in the style of a gripping murder mystery, but all the facts are true -- Kirsty Lang ― BBC Radio 4 (Book of the Week)

Not only does Mr French succeed in solving the crime, he resurrects a period that was filled with glitter as well as evil ― The Economist

French has an easygoing prose style... well chosen quotes bring a new vigour and crispness... [He] succeeds in giving voice to a tragic quest for justice ― Sunday Telegraph

It is the storytelling flair that marks Midnight in Peking so highly above the run-of-the-mill true crime stories: with its false leads and twists, it sucks the reader in like the best fiction ― The Scotsman

The shocking true tale, combined with prose you can't drag yourself away from, makes Midnight in Peking a work of non fiction as compulsive as any bestselling crime novel. It also brings justice at last for a young woman whose murder nearly went unsolved ― Sunday Express

Terrific, engrossing ... a gruesome tale of a hitherto forgotten case, and of the sheer tenacity of a grieving father -- Caroline Sanderson ― The Bookseller

Born in London, Paul French has lived in China for more than 10 years. He is a widely published analyst and commentator on China; his books include a history of North Korea, a biography of Shanghai adman and adventurer Carl Crow, and a history of foreign correspondents in China.

Zangiku
5つ星のうち3.0 good story, badly told
2013年10月22日に日本でレビュー済み
Amazonで購入
true murder of a white woman in 1930s China should be a whacking good tale. sadly, however, it is not well written, the narrative disconnected and hopping from one place to another in irritating and tiresome fashion. it takes a great lot of patience to get thru, and is easy to put down and not pick up again.
続きを読む
2人のお客様がこれが役に立ったと考えています
役に立った
違反を報告
レビュー を日本語に翻訳する
すべてのレビューを参照します

Cleopatra
5つ星のうち4.0 True Crime in 1930's China
2017年8月10日に英国でレビュー済み
Amazonで購入
Midnight in Peking is an intriguing book which looks at the gruesome murder of Pamela Werner at the same time as the Japanese were poised to invade China.

ETC Werner was Pamela’s adoptive father, a retired Consul who was an academic of Chinese with a particular interest in mythology and language. When his daughter Pamela failed to come home that cold winter’s evening in 1937 he searched for her, sadly her mutilated body was found at the bottom of Fox Tower with her heart and other organs removed.

The book is seriously well researched with many documents examined which gives the reader the feel of the ex-pat community in Peking, and it is telling that Pamela had been ice skating before bicycling home, activities that her peers living in the UK could easily have been doing. What Paul French evocatively describes is the gated community, Legation Quarter, where most of the ex-pats lived, although not Pamela and her father who lived outside, and then there was the were the ‘Badlands’ where life was a whole lot more tawdry and where the Russians congregated eager to sample its fast food outlets and brothels. Through the whole book you can’t fault the descriptions of the places that were familiar to Pamela.
The book is of course focussed on who killed Pamela and it comes up with a valid scenario based on his combing of the archives and not least the efforts of her father who made it his mission to keep the investigation into his daughter’s death alive. ETC Werner is painted as a complex character and he clearly didn’t set out in life to win friends, indeed quite the opposite so when he bombarded anyone who he thought had power with letters full of his suspicions about the perpetrator with letter after letter. In a link to ETC Werner’s work we also hear about the Chinese superstitions which relate to the spirits that haunt Fox Tower where Pamela’s dismembered body was discovered.
Equally interesting is the history of the creeping invasion of the Japanese through China and the knock on effect that had on the ex-pat community as well as the wider implications for the Chinese. This is a slice of history that was new to me and although my geography is particularly poor this part is explained well enough that I easily followed the time-lines and could visualise the widening of the areas under Japanese control.
This is a non-fiction book although the majority of the book is very readable, however I did get bogged down in the early section of who was who in the ex-pat community in China with its lengthy section on not just who did what now but what they’d done before without any real idea of the part they would play in Pamela’s story. This is a minor criticism of a book that bought a time and place to life long after both had disappeared.

Having read the investigation carried out by the author I felt his theory worked although the fact that the case was never solved seemed to be for people in high places supressing the truth rather than it was never known. The real mystery that remains is ‘who was Pamela Warner?’ because this is a young woman, despite being represented as a school girl she was in her late teens, who was a mass of contradictions.

Andy Smart
5つ星のうち5.0 A truly inspiring work!
2015年5月18日に英国でレビュー済み
Amazonで購入
A truly inspiring work.
I live in Beijing and reading this has been an absolutely fascinating look into a side of the city that I never really gave too much thought to. French delivers such a clear picture of what it must have been like in pre-war Beijing that you are effortlessly transported back to that time.

The story itself is more than compelling and it took me only two days to read it. I know it's a cliche but I really couldn't put it down.

French's interest in the tale is very apparent and a lot of toil must have gone into recreating the facts of the mystery. This comes through with his great attention to detail.

I will be heading for the Fox Wall and the neighbouring hutong as soon as I can.
続きを読む
1人のお客様がこれが役に立ったと考えています
違反を報告
レビュー を日本語に翻訳する

E Wood
5つ星のうち5.0 Midnight in Peking
2012年12月10日に英国でレビュー済み
Amazonで購入
A captivating account of the investigations into the death of Pamela Werner in January 1937, the often bungled police investigations obstructed by national agendas and desire to preserve image, as well as possible corruption and the sad account of a persistent father who struggles against many odds to find out the truth; how he was ignored and cast aside at many stages. Yet, his files eventually surfaced and provide insight into a complication and compromised society who had other, perhaps more pressing, items of their agenda at the time. Paul French captivates story in a compelling manner, taking the reader forward through the expected to the unexpected and sections of society that people preferred simply to ignore at the time. I thoroughly recommend this to any reader - a story which may have overwhelmed by the atrocities of the wars to follow, but which needed to be heard and understood for future generations.
続きを読む
違反を報告
レビュー を日本語に翻訳する

Tigercat
5つ星のうち4.0 A Real Oriental Mystery.
2014年3月21日に英国でレビュー済み
Amazonで購入
What a mystery! As someone interested in murder, both real and fictional, why had I never heard of this one? Perhaps because it happened in Beijing. This story of a father's pursuit of justice for his savagely murdered and mutilated daughter is a constant page-turner. Mr French approaches the mystery, not as a writer of detective fiction, but as an historian, and that adds to the story, he doesn't have to search for angles, the real plot is full of them! A great read about a slaying in the shadow of the Japanese atrocities in wartime China. This is a world that has disappeared but Paul French brings it vividly back to life.
続きを読む
1人のお客様がこれが役に立ったと考えています
違反を報告
レビュー を日本語に翻訳する

Grateful Granny
5つ星のうち4.0 Sad tale
2018年2月14日に英国でレビュー済み
Amazonで購入
A well written account of what must have been a tragedy to the father and people who cared for Pamela. I am always appalled by the cruelty of human beings and Pamela's untimely death and the shoddy investigation adds to the tragedy.
続きを読む
違反を報告
レビュー を日本語に翻訳する
すべてのレビューを参照します
トップへ戻る
Amazonについて
Amazonでビジネス
Amazonでのお支払い
ヘルプ＆ガイド
日本語ショッピングのための言語を選択します。 日本ショッピングのための国/地域を選択します。
© 1996-2020, Amazon.com, Inc. or its affiliates