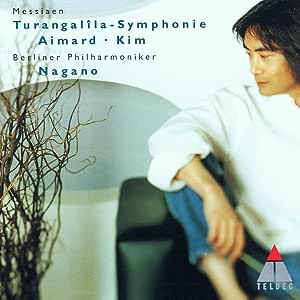 This symphony, commissioned by Serge Koussevitzky and written between 1946 and 1948, is surely one of the 20th century's most gigantic works. It's cast in 10 movements, and its grandeur of scope and concept, variety and sheer mass of sound are virtually unequalled. Scored for an enormous orchestra with multiple wind and percussion sections, the work includes substantial solo parts for piano and ondes martenot, an electronic keyboard instrument invented by Maurice Martenot that can produce all kinds of sound effects in a wide range of dynamics. The title is derived from two Sanskrit words of manifold meanings, but the composer insisted that he chose it only for its "sonority and melodious qualities." The piece centers on the idea of love, symbolized by the legend of Tristan and Isolde, but though its movements bear elaborate titles, it is not to be considered program music.

Messiaen has become something of a cult figure in recent years; for the uninitiated, his music requires some getting used to. The Symphony's most immediately striking characteristic is the orchestration: from gossamer delicacy of single and double lines, through sonorous brass chorales and thunderous percussion, to the literally overwhelming, often chaotic effect of every instrument on stage playing every note in the scale simultaneously. Its most problematic aspects are its length, repetitiousness, and static quality: the slow movements feel as if time had truly come to a standstill. Obviously, it requires great skill, concentration, and dauntless courage to bring such a work to life, and the performers on this disc succeed brilliantly. Aimard, who studied the piano part with Yvonne Loriod, the wife of the composer and primary exponent of his music, is terrific, and the orchestra sounds ravishing in a score undoubtedly far removed from its tradition. --Edith Eisler