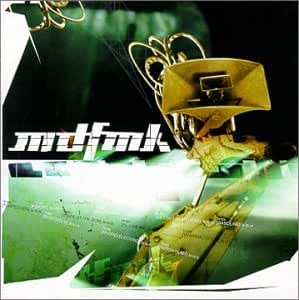 A prediction: "Torpedoes" will soon feature prominently on goth-industrial play lists around the world. It's got a good beat and, boy, can you dance to it. The demise of KMFDM appears to have been good for former members Tim Skold and Sascha Konietzko, who with the addition of former Drill singer Lucia Cifarelli have acquired a new lease on musical life. MDFMK is less techno, more noise, fewer politics, more emotion, and sounds more like a collaborative effort, as opposed to an assemblage of pieces that fit together really well but never quite jell. It is, in short, really good stuff and incredibly addictive, especially the aforementioned "Torpedoes." Other notable tracks include "Rabble Rouser," which often shifts rhythmic gears; the thoughtful "Stare at the Sun"; and the aptly titled "Witch Hunt," which seems to refer to the unfortunate correlation between the release date of KMFDM's final album and the Columbine High School shootings. Turn on the strobe lights and bring on the noise. --Genevieve Williams

M. Horwell
5つ星のうち5.0 Brilliant album!
2013年4月6日に英国でレビュー済み
Amazonで購入
Everything I was expecting from Konietzko and crew and then some! A heavier KMFDM sound that definitely needs to be played loud! If you like KMFDM then this should be in your music library!
続きを読む
違反を報告
レビュー を日本語に翻訳する

Super_K
5つ星のうち5.0 Should be regarded as KMFDM music
2015年10月14日にアメリカ合衆国でレビュー済み
Amazonで購入
**Into**
The band KMFDM broke up around the same time that they released their Adios album, and then the band temporarily reformed itself as MDFMK, and produced this album. Because Kaptain K was still leading the band and writing most of the music, the sound on this album isn't really different from "real" KMFDM, and really this album is excellent, so if you like KMFDM, don't miss out on this album!!! Also, this was one of the first albums to ever have Lucia, and Lucia does a really good job, perhaps earning her keep in KMFDM to this day. It also helped that Kaptain K and Lucia hit it off and got married in 2005...

**The Music**
Where some of the KMFDM music can get a lot of muddy guitar and percussion that almost drowns out the vocals, this album tends to be more clear. In my opinion, it is more reliant on synthesizer and vocals and less reliant on guitar and drums. Generally, these differences really suit me. This album also has some really strong Lucia vocals, which are quite sexy in a goth-girl type of way, as most of you already know.

Here are my favorite songs and why:

Get Out of My Head - Lucia's vocals are clear, clean, prominent. Hardcore sounding song, but not as hardcore as typical KMFDM. Relatively gentle synth chords are used to accompany her vocals.

Torpedoes - They took the "Damn the Torpedoes, Full Speed Ahead!!" quote and turned it into an entire song. Brilliant!!! Perfectly done!!!

Transmutation - Something just seems really visceral about the guitar parts in this song, they are very cleanly done, and I like their timbre. They assemble to voices of Lucia, Tim Skold, and Kaptain K in several different combinations and levels of distortion, which makes things interesting.

Hydro-Electric - Lucia provides most of the vocals once again. The vocals are suggestive of two things together...hydroelectric power and fluid dynamics and how dramatic love and passion can be sometimes. Wrap your mind around that one!!!

Witch Hunt - Really fast powerful tempo with shouted vocals. The term "Witch Hunt" and the other subject matter of the song is related to loss of liberty, over-control of government on people, and concerns about lapse of proper judicial process. There are some very powerful brass choir parts that bring shivers down my spine. There are certain vocal exclamations like "Burn that bridge!!" in this song that have been designed to have a sort of mike-drop type feel to them that I just can't describe here. You'll just have to check it out.

**Summary**
Don't write off this album just because it isn't labeled KMFDM. It should be regarded as a KMFDM album. Some of you might actually like it more than the adjacent KMFDM albums in the chronology. If you like Lucia specifically, that would also be a reason to get this one.