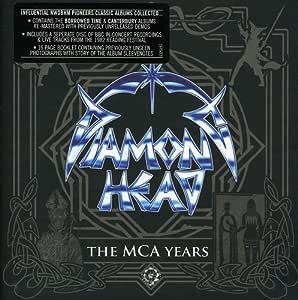 Matthew Schwarz
5つ星のうち4.0 Affordable set of Diamond Head's non-metal 2nd & 3rd album
2014年12月6日 - (Amazon.com)
形式: CDAmazonで購入
Diamond Head is best known for their self-produced debut (alternately called "The White Album" or "Lightning to the Nations"), one of the heavier albums of the 1980 New Wave of British Heavy Metal, that was a big influence on the American thrash movement a few years later. I got the remaster of that debut, and the original 7 album tracks are riff-tastic, forward-thinking (for 1980) metal, but I noticed the 7 or so bonus tracks were a little less impressive - leaning a little more towards 80s radio-rock than underground metal. Well, their following two albums (included in this "MCA Years" set) are pretty much in the vein of those bonus tracks - the most metal moments are the rerecordings of two songs from "Lightning to the Nations" (which, however, don't match the original versions). So, if you have "Lightning to the Nations", you've pretty much got the "metal" quotient of Diamond Head's classic era (I haven't got their later albums yet).
So, now that we've determined this isn't very metal, is it any good? Yeah, actually I've found I quite like it after a few listens and once I accepted it was "80s rock" and not metal. There's some good songs here, a mix of radio-friendly poppy rock and more musically adventurous and interesting things (not quite "progressive rock" as I've seen some say, but not generic, white-bread music, either). I particularly like the epic 7 1/2 minute title track from their second album, "Borrowed Time" (with lyrics inspired by the fantasy stories of Elric, which also inspired that album's cover). The overall sound is a bit reminiscent of the 80s work of some of those bands that were kinda "heavy metal" in the early 70s, like Uriah Heep and Wishbone Ash, with the Zeppelin influences that were also apparent on their first album. (Although, they don't sound "like" Zep). I would recommend this if you like interesting, well-done 80s classic rock and not just metal.
This set includes the albums "Borrowed Time" and "Canterbury", with non-album studio tracks, as well as a full live disc and some live bonus tracks. I was hoping the live tracks might recapture some of the energy of the first album, but they pretty much sound akin to the studio versions. The discs are in cardboard sleeves with the album artwork. I would've preferred the jewel-case versions of these, but after reading about the "style change", I decided to opt for this cheaply-priced set rather than the $45 or so it would cost for these two separately! (Oddly enough, "Canturbury" is available at a reasonable price, but "Borrowed Time" is running $30+ at Amazon).
続きを読む
4人のお客様がこれが役に立ったと考えています
レビュー を日本語に翻訳する

RobotMechanic
5つ星のうち4.0 Worth the Money!
2014年8月3日 - (Amazon.com)
形式: CDAmazonで購入
The Borrowed Time CD is absolutely awesome. I bought it specifically for the song Call Me, and I've heard a lot of the other songs before. The Canterbury CD was kind of weak, but doesn't go without some pretty good songs that are downright catchy. The Bonus Live track disc is a must have for any fan of live music, especially a fan of New Wave Of British Heavy Metal. Overall, a decent purchase that'll keep you singing the songs throughout the day...
続きを読む
レビュー を日本語に翻訳する

Diamond Head's connection to Metallica is well documented. So if you are here it may be because of that connection. Metallica has covered nearly the entire contents of Diamond Head's album Lighting To The Nations. Let's make one thing clear about Diamond Head, Lighting to The Nations is their magnum opus. If you are unfamiliar with that album, you need a copy of that in your collection. But this review is about their MCA years which includes the following CD's: Borrowed Time, Canterbury, and selected live tracks on the Live at Reading Rock 1982 CD included here.

A few points to make on the box set 1. The five star rating is for the box set and its contents. 2. The outer box is a solid card-board gatefold and is very nice. 3. The three disc come in cardboard reproductions without any additional cd specific booklets, which is standard with many of these box sets. 4. There is a really nice booklet with some cool pictures and band bio which discuss some of the albums. 5. The CD's are remastered and more compressed in comparison to the older CD import versions of these. These play well and I did not hear any distortion problems at high volume. 6. This set is a rediculously low priced set with real high value.

Borrowed Time (1982)- (4.5-stars) I have always loved this album and I rate it as a classic without hesitation. The original seven tracks are: 1. The fantastic, haunting and epic In The Heat of the Night, 2. To Heaven From Hell 3. the radio friendly single Call Me, 4. Lightning to the Nations, 5. the dark, epic Borrowed Time, 6. the blues infested Don't You Ever Leave Me, and the all time classic, that even the Big Four covered in concert 7. Am I Evil? (I rate the CD as 4.5 stars only because Lighting to the Nations, and Am I Evil appeared on the original Lightning to the Nations release). The disc included in this set has nice bonus content which is as follows: BBC Radio 1 Session tracks including Borrowed Time, Don't You Ever Leave Me, Sweet and Innocent and Lighting to The Nations. Also included are three tracks from the Four Cuts EP which are Dead Reckoning, Trick or Treat, and Shoot out the Lights. That makes this whole remastered disc quite a killer package with some must have bonus tracks.

Canterbury (1983)- (3.5-stars) There are some fans which would say this is where it all went wrong for Diamond Head. Band Members Kimberly and Scott were fired during the recording sessions leaving studio musicians to fill the bill. The sound was more progressive and had far less bombast then Lightning to The Nations, Borrowed Time, or their EP's. I believe this CD has stood up well over time and while Canterbury is not the classic its two predecessor's were, its still a very good disc. You may experience a bit of listener shock going from Borrowed Time to Canterbury but give Canterbury a fair shake, its well worth it. Strong Tracks Include: the poppy Makin' Music (which was released as a single), One More Night, the epic, dark themed To The Devil His Due, Ishmael and Canterbury. The Bonus material includes the Makin' Music single and several previously unreleased demo's which are: Can't Take No More, Time's On My Side, and Come to Hear You Play. Here again the bonus material and original works make this a really nice piece for new and old fans alike.

Disc Three- Live at Reading Rock. This includes live tracks of the band at the peak of their skills. Tracks 1-6 are taken from the Reading Rock Festival in August of 1982. These tracks are: Am I Evil, In The Heat of The Night, Borrowed Time, Don't You Ever Leave Me, Sucking My Love, and Play It Loud. Tracks 7-11 are from BBC In Concert 1982 and are: Borrowed Time, In The Heat of Night, Sucking My Love, To Heaven From Hell and Play it Loud. While there is some redundancy here, the tracks are professionally recorded, sound great and gives a glimpse into the heart of a great band that should have been big.
続きを読む