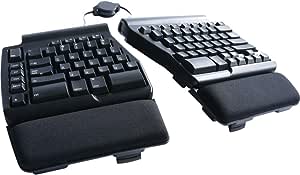 R. Frangiamore
5つ星のうち2.0 edit: Perfect layout, unusable reliability.
2017年4月13日にアメリカ合衆国でレビュー済み
サイズ: Win用 タクタイルスイッチAmazonで購入
**UPDATE 2018**
I give up. My replacement Ergo Pro is now worse than the one I sent back. There is wandering keychatter on almost every heavily used key on the left hand side. You'll get two characters on roughly every fifth keypress for problematic keys. The only fix (temporary) is to pop the keycap and wiggle the switch up with a screwdriver. Typing this review has given me double S's every other word. Try typing passwords or code with this. Yeah right.

It's just awful. The really disappointing part is there's no other mechanical split keyboard out there with a layout this good. If only it worked reliably. I don't even want to bother with a replacement. Maybe the "Version 2" is better...?

Edit: I'm giving 2 stars instead of 1 just because I adore the layout so much, I'm still using the keyboard even with the keychatter. I still can't find an affordable mechanical split with the functionality of this one.

**UPDATE**
It has now developed a problem where every 10th press or so, I'll get multiple F's when I press the F key. Sometimes two, sometimes three. This, combined with the mysterious 6's and 7's, is making me question my particular unit.

I love this keyboard. I really do. It gives me the smooth matias keys I've always wanted in a split form factor. But, there are issues.

Bad stuff:
* The biggest is that for whatever reason, I get the occasional random "6" or "7" inserted into my typing. It's very intermittent, maybe once a week. But it's still maddening. Note, I primarily type in a Windows 10 VM running via Parallels Desktop on an MBP. So there's a lot of hoops that my keypresses need to jump through... I could understand the occasional character getting eaten, but to actually insert keys I never pressed? Not sure about that. It's not enough to return the keyboard but I wish I knew what was doing it.
* I'm used to the pressing the F5 key and the 6 key with my left hand. It is very awkward to reach up to F5 with my right. I get that they're making groups of four, but it's still weird.
* The undo/cut/copy/paste keys on the left could be something more useful. These are quite possibly the four easiest key combos to hit manually. It takes more effort to go over there and find Copy than it does to hit ctrl C.
* I kind of wish there was enough room for the context menu key to be a real key instead of a Fn key.

Good stuff:
* Both spacebars feel very nice. Raised and easily smacked.
* Left control is similar.
* The home/end/pgup/pgdn group is nice. I hate keyboard that put these under a Fn combo.
* Delete is small but easily found.
* The palmrests are nice, and I like that I can replace them.
* 3 port usb hub comes in handy.
* Removable usb cable is a nice touch as well.
* Feet on the bottom give multiple combos for angles.

Finally, on the keypresses themselves, it's great. I get the mechanical feel we all love without the full clackity annoyance to coworkers. It's still loud, but not "that guy" loud.
続きを読む
21人のお客様がこれが役に立ったと考えています
違反を報告
レビュー を日本語に翻訳する

Peter Moskos
5つ星のうち2.0 Keys eventually ended up typing double. Eventually I gave up.
2017年12月15日にアメリカ合衆国でレビュー済み
サイズ: Win用 タクタイルスイッチAmazonで購入
This is very good keyboard except... it consistently stopped worked. After a few weeks to a few months, a key would start typing double every now and then. The good folks at Matias were very nice and replaced the half of the keyboard with the malfunctioning key. And then the other half. And then a third half? I might have gone through four halves! At some point it happened again (always the same problem, not always the same key) and I gave up. That's a pretty penny to through down the drain. It's nice that Matias has good customer service, but at some point I need a keyboard that works 100% of the time, not replacement halves sent to me because it doesn't work. I assume there's some deep design or engineering flaw. I don't know. Other than that (...Mrs Lincoln...) it was good keyboard. Not as nice in terms as action as DasKeyboard, but the split design was good for my carpal sensitive wrists. I did wish that the keys on the bottom right (page up/down & arrows) were less cramped, full sized, and set off more to the right.
続きを読む
10人のお客様がこれが役に立ったと考えています
違反を報告
レビュー を日本語に翻訳する

AAs you can see, I often get repeaated key presses using this board. It's a really a shaame as I do like the keyboard aalot. I however can not staand the duplicate key press issue thaat has plagued me with this board (and the replaacements).

I am giving up an officially throwing in the towel on this thing.

I ordered two of these aand both had issues, Maatias replaced both, aand both of the replaacements have now developed the same eact problem with multiple keypress regsters or no keypress registers. Sometimes it's multiple a's, sometimes it's a completely lack of a x or backspace.

J. A. Afzelius
5つ星のうち4.0 Space bar stopped working. No response from seller on warranty.
2017年8月31日にアメリカ合衆国でレビュー済み
サイズ: Win用 タクタイルスイッチAmazonで購入
Amazing keyboard, feels great and love that I can configure it to whatever feels comfortable. It also doesn't budge at all while I type. It has an unusual keyboard config, but nothing I can't adjust to--certainly no stranger than the MS sculpt ergo.

Keys feel great, all around awesome

EDIT - Still no response from seller, but managed to contact manufacturer by email (do not use their webform, they don't respond to it). They promptly shipped me a new right side to the keyboard. It's working perfectly. If the space bar makes it to the new year, we'll see about bumping this back up to 5 stars.
続きを読む
3人のお客様がこれが役に立ったと考えています
違反を報告
レビュー を日本語に翻訳する
すべてのレビューを参照します
Amazonプライム会員ならお急ぎ便、日時指定便が使い放題
さらに、映画もTV番組も見放題。200万曲が聴き放題 。クラウドに好きなだけ写真も保存可能。
> プライムを無料で試す