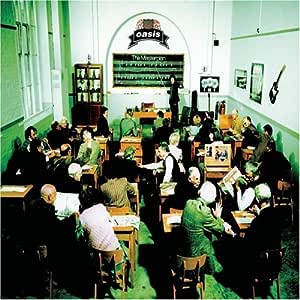 The Punk Panther
5つ星のうち5.0 Half the world away...
2018年9月27日に英国でレビュー済み
Amazonで購入
This album was a compilation of 'b' sides and unreleased material mainly aimed at the US market which contained a quality of songs that many artists would have given their eye teeth to have in their canon. Indeed, it can be likened to as a perfectly credible album and many would argue it is the superior collection of work to its official predecessor 1977's bloated and somewhat indulgent "Be Here Now".

The album has not been remastered, but, via the wonders of digital technology, if you have the first three albums in their 2014 remastered "deluxe editions", you can cherry pick the tracks to make up a 2014 remastered version of "The Masterplan". Most impressive it sounds too. Not as bombastic as the original masterings, with some subtleties in percussion and bass brought to the fore.

Highlights are the solid, rocking blast of "Acquiesce"; a raw live version of The Beatles' "I Am The Walrus"; the jaunty psychedelia of "Underneath The Sky"; the plaintive, acoustic, Paul Weller-influenced "Talk Tonight"; the surprising Burt Bacharach-inspired "Going Nowhere". These are all excellent tracks worthy of positions on regular albums. "Fade Away" rocks frenetically, but no amount of remastering will cure its raucous sound, however. Therein lies much of its grungy appeal, though. "The Swamp Song" is an excellent instrumental too. "Listen Up" has a great bass sound and clear, sharp percussion. "Rockin' Chair" has echoes of The Jam, for me. Maybe that's just me, but there is something about it. The tuneful, emotive "Half The World Away" and "(It's Good) To Be Free" both sound excellent in their remastered formats.

Just check out "Stay Young". Maybe the best track on the album. Solid anthemic Oasis rock at its finest. Their rock is never particularly fast, or slow. It is always just solid. "Headshrinker" has a real seventies-style guitar intro and a punk feel to it. Again, it forcefully chugs along. Noel Gallagher reckons the acoustic, bassy and orchestrated "The Masterplan" is the best Oasis song he ever wrote. When it breaks out into the full band bit, it is easy to agree with him.

india
5つ星のうち5.0 one of their best albums
2013年11月6日に英国でレビュー済み
Amazonで購入
it's such a good thing that this compilation album was put out. every song is a work of art. they are all b sides so many are sung by noel. some songs will be familiar such as acquiesce, i am the walrus and of course the masterplan. fade away, stay young and headshrinker are great rock songs for jumping and air guitar. the swamp song is such a jaw-dropping instrumental song and in full quality it's genuinely mind blowing. brilliant riffs and exceptional vocals. lots of nice effects too. if you still need convincing about whether or not oasis has deserved their fame get this album because trust me - they do.
続きを読む
4人のお客様がこれが役に立ったと考えています
役に立った
フィードバックを送信中...
フィードバックをお寄せいただきありがとうございます。
申し訳ありませんが、お客様の投票の記録に失敗しました。もう一度試してください。
違反を報告
レビュー を日本語に翻訳する

Dana
5つ星のうち5.0 As good as folk say it is
2017年8月22日に英国でレビュー済み
Amazonで購入
Not disappointed with this CD. The first b side of theirs i discovered was talk tonight which is an excellent song. Oasis were such a mega talent and listening to this, it's obvious. The master plan is excellent too. 5 stars!
続きを読む
2人のお客様がこれが役に立ったと考えています
役に立った
フィードバックを送信中...
フィードバックをお寄せいただきありがとうございます。
申し訳ありませんが、お客様の投票の記録に失敗しました。もう一度試してください。
違反を報告
レビュー を日本語に翻訳する