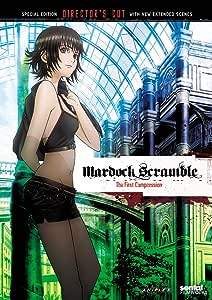 To stop the unstoppable you need the irresistible. To kill the un-killable, you need someone for whom death no longer has a meaning. And to catch the perfect serial killer, you need the one person who knows his methods the best... his last victim. Murdered and now reborn, the female cyborg named Balot exists for only one reason-to track down the man who killed her and bring him to justice. But can even the ultimate hybrid between ghost and machine take down a monster who wipes his own memory? Or will a shadowy cabal of gruesome mutants who want her body parts for their own perverse purposes get to her first? This new, special edition director's cut of Mardock Scramble deepens the mystery of this hit anime, providing even more insight into the dark psyche of the cyborg assassin and her dangerous assignment!

Mr. Roy Williams
5つ星のうち5.0 Interesting title
2012年6月18日に英国でレビュー済み
Amazonで購入
The title of First compression appealed to me and the idea of a resurrected being to exact revenge.I'm a sucker for female protagonists and,at first,resisted the temptation to buy this,but,well,I like anime and it just might be good,so I bought it and was pleasantly rewarded as I consider it a reasonable story.It's naff at times when a supposedly strong character is easily shaken or overpowered,but I guess that's just to show her vulnerability.I think I might have been comparing her to Canaan.Her controller or creator is interesting as he pairs her up with a data entity and tells her to be careful and sends her off into the big,bad world.It's pretty formulaic with the person brought back to life in a pod at some point in the future and has to make sense of and come to terms with the differences and changes one would expect of a brave,new world.Would I buy the second compression ? Difficult to say.I rate this at 7/10 so there's room for improvement but I'd have to watch the next disc to see if that happened,So,it's not all bad but also it's not all good.The 18 certificate is because there is reference to prostitution which is the premise for the revenge.It's not all serious and contains some humour.
続きを読む
2人のお客様がこれが役に立ったと考えています
役に立った
フィードバックを送信中...
フィードバックをお寄せいただきありがとうございます。
申し訳ありませんが、お客様の投票の記録に失敗しました。もう一度試してください。
違反を報告
レビュー を日本語に翻訳する

felly117
5つ星のうち4.0 Mardock Scramble - The First Compression
2012年9月7日に英国でレビュー済み
Amazonで購入
Mardock scramble the first compression is a brilliant sci-fi anime. It features some really dark and disturbing scenes on what life might be like for prostitutes in the future.

The film is definately not for the faint hearted amongst you and is really rather violent.

The characters develop well through the film and by the end you can truely understand there predicaments.

The art style used is beautiful and the gore is well drawn.

This release includes the directors cut (no English soundtrack) which is much darker than the theatrical release.

The only reason this film did not recieve a 5 star rating is from the immense cliff hanger ending.

E.A. de Vries
5つ星のうち4.0 Great movie! The settings from a post-apocalyptic city remind ...
2016年1月17日に英国でレビュー済み
Amazonで購入
Great movie!The settings from a post-apocalyptic city remind me of the great movie "Blade Runner."with Harrison Ford.
Disk contains two versions.Don't even bother to watch the American one,since all the Hentai-scenes in it were painstakingly removed,
while the original Japanese still contains all of them.
続きを読む
役に立った
フィードバックを送信中...
フィードバックをお寄せいただきありがとうございます。
申し訳ありませんが、お客様の投票の記録に失敗しました。もう一度試してください。
違反を報告
レビュー を日本語に翻訳する

D. G. Slade
5つ星のうち5.0 Mardock Scramble - The First Compression [DVD]
2013年5月11日に英国でレビュー済み
Amazonで購入
This could quite easily be a story line from Ghost in the shell Or any of the other Cyber punk series.
Great animation and stunning action.
続きを読む
役に立った
フィードバックを送信中...
フィードバックをお寄せいただきありがとうございます。
申し訳ありませんが、お客様の投票の記録に失敗しました。もう一度試してください。
違反を報告
レビュー を日本語に翻訳する

dale valentine
5つ星のうち5.0 Great buy
2013年9月27日に英国でレビュー済み
Amazonで購入
The description of the product was exactly as listed. Really good quality and was delivered really fast as well, product arrived with in 2-3 days. Ive had no issues with this purchase and i am very pleased with it.
続きを読む
役に立った
フィードバックを送信中...
フィードバックをお寄せいただきありがとうございます。
申し訳ありませんが、お客様の投票の記録に失敗しました。もう一度試してください。
違反を報告
レビュー を日本語に翻訳する

C Dickinson
5つ星のうち5.0 Gritty, dark and thoroughly intriguing
2012年4月17日に英国でレビュー済み
Amazonで購入
I hadn't seen Mardock Scramble before buying the BD release, so purchasing this was something of a gamble - and having now watched the film, I can say it was a gamble worth taking.

An engaging story of despair and retribution set in a dark, futuristic world, Mardock Scramble is visually fantastic. From the initial scenes of an almost Tron-like city, to a brief but frantic car chase, onto gun battles in near total darkness, the animation is constantly top-notch and the high definition picture on the BD really makes for stunning visuals.

The audio is good, having only watched the movie with the Japanese audio track, I can't comment on the quality of the English dub. The Japanese voice actors all do a great job, particularly those of some of the more grotesque characters that the film presents. The soundtrack fits well without having any standout moments, but generally adds depth and atmosphere throughout the picture.

My only slight complaint with the movie is that it is only just over an hour long, and with the story ending on a cliffhanger, I found that the film cut off just as I was really getting into it.

The BD features the theatrical release, and the Director's Cut (though this is only available with Japanese audio and English subtitles), with the theatrical release being best for anyone who does not want to be subjected to some of the film's more explicit sexual content. Other extras include trailers and TV spots, though these aren't particularly fascinating.

Overall, aside from the short length, this is a great anime movie and one that I would definitely recommend to anime fans. If you are a fan of series that feature gun toting action, such as Hellsing or Hellsing Ultimate, then Mardock Scramble might be right up your alley.
続きを読む
22人のお客様がこれが役に立ったと考えています
役に立った
フィードバックを送信中...
フィードバックをお寄せいただきありがとうございます。
申し訳ありませんが、お客様の投票の記録に失敗しました。もう一度試してください。
違反を報告
レビュー を日本語に翻訳する

RyuShoji
5つ星のうち5.0 A Fantastically Twisted Classic
2012年6月3日に英国でレビュー済み
Amazonで購入
The back of the blu-ray case states that this film is on par with other cyberpunk greats like "Ghost in the Shell" and "Blade Runner". Usually, I find these kind of statements rather baseless, but in this case, I have to agree.

As you have probably guessed from the product description, "Mardock Scramble: The First Compression" is no K-ON! or Studio Ghibli; it deals with a pretty heavy and dark subject matter, yet manages to do so tastefully. It's worth noting that the main theatrical feature is actually a 15 certificate - the 18 certificate comes from the director's cut, which features explicit sex scenes. However, these scenes are not there for titillation - the way they are shown detaches us from them, leaving only distaste and sympathy for Rune Balot.

Rune is definitely the most likeable anime protagonist of recent history. She is a woman of few words (which are actually spoken through a mechanical voice) but when she does speak we are allowed to see a fragile young girl who finds it hard to trust anyone, yet is willing to cling onto anyone who gives her any kind of positive words. Throughout the film you just want to hug her and tell her that everything will be okay.

In my title, I mentioned that the film was twisted in a sense. However, this does not come from the story, which as I said earlier is done rather tastefully - it comes from the characters. Dr. Easter is one of the most tame, yet proudly exclaims that a morgue of 800 corpses would be like a playground for him. Let's just say that there are some characters who like to transplant some people's body parts onto really unusual parts of their bodies.

As expected from a high definition theatrical feature, the animation is superb - this is definitely a film to buy on Blu-ray. For the most part, the colours don't tend to be bright, fitting with the film's dark nature, but the level of detail is fantastic. I watched the Director's Cut so I have only heard the Japanese cast so far, but they did a splendid job - Rune Balot's "voice" in particular stands out as being hollow-sounding as expected from an artificial voice, but also cute and sweet, as expected from a young girl.

My only complaint would be that KazéUK is still waiting for the English dub of "Mardock Scramble: The Second Compression". However, as soon as I finished watching the film, I ordered the original novel (well, *novels*, but Viz Media printed them in English as one bound volume).

If you are willing to put up with some grotesque imagery and a sad story with a twisted er...twist, then this is definitely the film for you - this trilogy will no doubt be remembered in years to come as a classic.
続きを読む
6人のお客様がこれが役に立ったと考えています
役に立った
フィードバックを送信中...
フィードバックをお寄せいただきありがとうございます。
申し訳ありませんが、お客様の投票の記録に失敗しました。もう一度試してください。
違反を報告
レビュー を日本語に翻訳する