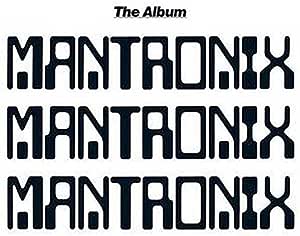 Formed by now legendary New York producer Kurtis Mantronik and MC Tee, Mantronix are still known as one of the best and most innovative groups from hip-hops golden age. Mantronix were probably the first group to popularise samples as pop hooks, although their music actually crossed the boundaries of hardcore rap, electro, techno and house, their music has inspired artists around the world. Their first single; Fresh Is The Word, hit the streets of New York in 1985 courtesy of Sleeping Bag Records. The track had the streets and clubs of New York pumping with its raw beats and East Coast rapping that draws comparisons to Run DMC and LL Cool J. Their second single, Ladies, featured a smoother vocal sound than Fresh Is The Word, and the third single followed just a few months later, Bassline, is another slice of typical mid-80's hip-hop with it's raw beats and energetic rapping, and reached the UK top 40 in May 1986. With its futuristic production Mantronix: The Album was way ahead of it's time when released in 1985 and featured all of their hit singles and some of the rawest hip hop ever released. Now the album has been remastered and features 5 extra tracks - different versions of three of their key tracks. This album is Mantronix best and an essential album for any hip hop fan. EMI. 2006.

Music Lover
5つ星のうち5.0 An Essential Purchase
2007年12月15日に英国でレビュー済み
Amazonで購入
In late 1985 Kurtis Mantronik and MC Tee released 'Fresh Is The Word' as a 12" single on the New York based 'Sleeping Bag Records', and as a result of the success of that single - which had an immediate impact on the Hip Hop community - were able to go on to release this, the simply titled 'The Album'.

From the moment you hear the introduction to 'Bassline' you know that this is different. Mantronix always had a unique sound, and here there is an immediate air of purpose and menace to the music. This is Hip Hop, but it isn't Hip Hop by numbers, and it isn't about slavishly following the predominant musical Hip Hop blueprint of the time. This can be seen in the crisp introduction of 'Needle To The Groove' (latterly sampled by Beck and The Beastie Boys) and the 'Mega Mix' featuring the edits of The Diamond Two (Chet Nunez and Charlie D). The inclusion of a 'Mega Mix' (perhaps the first self referencing type found on a Hip Hop album) is also noteworthy as this would become a staple on any subsequent release by the group. The strong rythmic elemnt in Mantronix is excellently showcased in 'Ladies' and 'Get Stupid Fresh', a sparse dub like soundscape featuring the short vocal interjections of MC Tee. 'Fresh Is The Word' is propulsive and simple, a driving simple beat allied to the strongly lyrical voice of Tee, whilst in 'Harcore Hip Hop' the group reference many of the founders of Hip Hop, on a track that is unrelenting in its intensity.

This is an album which can be rewarding and frustrating in equal measure,it does not quite work as a complete presentation, and this was perhaps the point apparently acknowledged by Mantronik's own later assessment of the album - that it was really to be viewed as an EP in which his early attempts to grapple with the available technology can clearly be heard as he also attempted to produce his own particular 'sound world'. A further contributing factor to this sense of uneveness can perhaps be explained by the simple fact that there was nothing quite like the sound produced by Mantronix in Hip Hop in 1985 or subsequently. The group has never quite fitted in to the prevailing narrative of Hip Hop often espoused today, and this perhaps explains their relative absence in many considerations of the history of the music form.

In this new remastered package by EMI you get a number of bonus tracks included, most notably the mix of 'Hardcore Hip Hop' (known as the NME mix) which was not previously widely commercially available. The sound quality is excellent, and EMI is to be commended for the care taken in this release. If you are a fan then you may well own this on vinyl, in which case this represents an excellent opportunity to replace a worn or damaged disc with worthwhile bonus material included.

If there is a complaint it is that there are no accompanying liner notes, which could have gone some way to explaining how unique and important the group was - and how Mantronik's production work (here in its early stages) would go on to have an impact beyond the confines of Hip Hop.

So. Buy this, enjoy the music, and perhaps consider exploring the later 'Music Madness' (1986) and 'In Full Effect' (1988) - where the soundscapes hinted at on this release are more fully realised.

John H.
5つ星のうち5.0 Ahead of their time
2008年6月15日にアメリカ合衆国でレビュー済み
Amazonで購入
This was definately a record ahead of it's time. It brings back memories, but let's not go there. If you have never listened to MANTRONIX, but like current hip hop this would be a good choice. Give it a shot, you won't be disappointed!
続きを読む
違反を報告
レビュー を日本語に翻訳する
すべてのレビューを参照します
Amazonプライム会員ならお急ぎ便、日時指定便が使い放題
さらに、映画もTV番組も見放題。200万曲が聴き放題 。クラウドに好きなだけ写真も保存可能。
> プライムを無料で試す