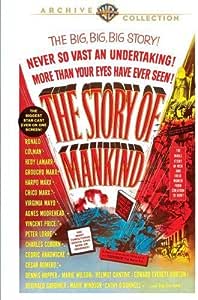 Here is the most far-out courtroom thriller you'll ever see. The setting is outer space, the defendant is all of us and the issue iswhether we should be allowed to survive. Defending counsel, the Spirit of Man (Ronald Colman), says yes. Prosecuting counsel, the Devil (Vincent Price), says no. And each presents historical evidence in vignettes that feature Hedy Lamarr as Joan of Arc, Dennis Hopper as Napoleon, Harpo Marx as Isaac Newton, plus Groucho, Chico, Virginia Mayo, Peter Lorre, Charles Coburn, Agnes Moorehead - 25 stars in all! Produced, directed and co-written by Irwin Allen (The Poseidon Adventure), this uncommon curio is Colman's final film and the last time the three Marx Brothers appeared in the same movie.When sold by Amazon.com, this product will be manufactured on demand using DVD-R recordable media. Amazon.com's standard return policy will apply.