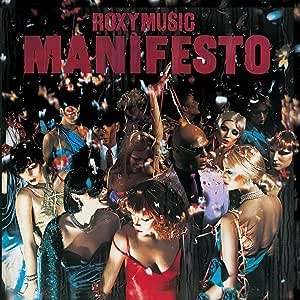 The key to Roxy Music's success is that from the start they were grown men playing rock & roll. Coming to stardom in his late 20s, Bryan Ferry had the knowledge and experience to invest his songs with novelty and depraved intelligence, but was sufficiently new to the whole thing that Roxy always sounded fresh. When they started getting on each others' nerves, they had the presence of mind to split up for a while, and reform when they felt like it--the result was Manifesto, a unique, compelling record that could well be their best album. Informed by the rhythms and radiance of disco, with a vicious edge that recalls their early recordings, and the effortless fluidity of Avalon and Flesh & Blood, it's the consummate Roxy record. The singles--"Dance Away", "Trash" and "Angel Eyes"--showcase the album's range, spanning saxophone suavity, fractious rock and hypnotic, disorientating disco. But the real jewel is the title track, a taut tapestry of rhythm and noise that they never topped. --Taylor Parkes

The Punk Panther
5つ星のうち3.0 Ain't that so...
2018年6月18日に英国でレビュー済み
Amazonで購入
For many people, this is Roxy Music's worst album, many finding it introspective and possibly, at times, a bit more like a Bryan Ferry solo album. In some respects I agree, but there are also good points to be found on this album.

Released in 1979, when Roxy Music reconvened after a four-year hiatus, Roxy Music "Phase Two" were a radically different beast to the art-rock experimentalists of 1972 and 1973. The emphasis was far more on a polished, adult-oriented rock sound, as I alluded to earlier, much like a Bryan Ferry solo album. Certainly tracks like "Ain't That So" and "Still Falls The Rain" fit that particular bill. The title track, however, is impossible to categorise, a mysterious slow burner that is all the better for it. "Stronger Through The Years" is just a great track whoever it is. For many, the album falls down a bit because the two well-known tracks, "Angel Eyes" and "Dance Away" do not appear here in their single formats. "Angel Eyes", in particular, suffers from a much denser, grungier mix. "Trash" is similar - a gritty two minute thrash and "Cry, Cry, Cry" treads a similar path. "My Little Girl" is not one of their better tracks, however, and "Spin Me Round" is atmospheric enough, I guess, but doesn't really get anywhere.

Post-punk was starting to make its presence felt and there are definitely hints of it here in tracks like "Trash". In many ways, this was an album suited to the zeitgeist. Punk's anger was fading and arty post punkers were having their moments in the sun. Many of those people were quite amenable to this album. I have to admit, so am I. It is always worth a listen, even now.

igloo
5つ星のうち4.0 Impressive recording
2019年6月22日に英国でレビュー済み
Amazonで購入
I have not set out to write reviews of the music content as “beauty is in the ears of the listener”. These reviews are about the quality (or not) of the recorded sound. To read about how the reviews are done please see my profile.

It’s alive! A recording with a full range of sounds and a clear contrast between the instruments. There is a deep rich overall sound with superb dynamic range.

The drums are clear and sound like drums. There is a very good sound stage and clear channel separation. The bass is sharp without dominating and becoming “boomy”. On some tracks the bass can be a little forward and a tad intrusive.

The guitars sparkle adding to the rich warm sound. The keyboards have an interesting and audible “twang”. Even in the complex passages all parts of the music remain audible and do not degenerate into a blur.

The sax sound is clear and sharp without being shrill.

The vocals are well defined and not lost in the sound nor do they overly dominate the instruments. The vocal inflection and Ferry’s vocal sneer is clearly audible.

Overall this CD is clear, sharp and detailed with a rich sound. It is a benefit to any collection.
続きを読む
2人のお客様がこれが役に立ったと考えています
違反を報告
レビュー を日本語に翻訳する

Alexander G. Marshall
5つ星のうち4.0 Roxy's Dark Masterpiece
2013年10月1日に英国でレビュー済み
Amazonで購入
The conventional view is that Roxy became increasingly staid after Brian Eno left. I respectfully disagree. Bar perhaps two or three perhaps slightly less engaging tracks after the half way point-'Cry Cry Cry' and 'Dance Away' let's say- this album is a dark and gripping masterpiece and, as others have said, might just be Roxy's best work.
First of all, people confuse Roxy's image with their substance. The image of Bryan Ferry in his evening jacket leads people to confuse Roxy Music with some kind of middle-of-the-road cocktail band. They were never that.
Second, I think many people miss just how radical Ferry's musical compositions were-if one were to argue that this was cocktail music, then it was cocktail music via Brecht, the Weimar Republic, early electronica, R'n'B and the subtle revolution of the electric guitar. Even when dealing in what in other hands could be straight ahead pop or R'n'B tunes, there was usually a disturbing dissonance at the back of Roxy tracks that always elevated them above the mundane-whether the weird horns on 'Angel Eyes' here, or the demonic child's music box toy tinkling in the background of closing track 'Spin me Round'. The first six tracks and final track on this album epitomize Roxy's cleverness with texture and aural depth of sound, but work terrifically as straight out songs as well. Perhaps the fact that the music is both complex and fiendishly well executed, but is also danceable is what has lead the band post-Eno to be so underrated.Not many bands could pull off the trick of being both complex and punchy quite as well as is done repeatedly here.
Thirdly and finally, nobody has ever sung quite like Bryan Ferry. This point perhaps doesn't get made perhaps as often as it should be, but in the pop music vocal tradition the guy is completely unique-not a screamer but not a mumbler either, a very clear and distinct voice with an inventive approach (he does a lot with what is sometimes very little here, an approach which would become even more apparent in his 1980s solo work). Though in the end he pulls off the trick of not sounding quite like anybody else you've ever heard, he's closer to Sinatra and Bing Crosby perhaps than more 'rock' singers-but then listen to the very dissonant and sometimes disturbing melodic contexts and lyrics he uses. This is not a sentimental or sappy album. I don't care about Ferry's politics-what little I know of them , I don't particularly like-but this music alone gets him a place in the pantheon of one of Britain's most original and unusual pop artists.
続きを読む
16人のお客様がこれが役に立ったと考えています
違反を報告
レビュー を日本語に翻訳する

Big Dog
5つ星のうち1.0 Horrible.
2019年8月28日に英国でレビュー済み
Amazonで購入
I love every Roxy album up too this point. As i write this review their first album is playing in my cans. Genius. Totally lost. All you need to sum up how i feel is compare the fade out of Remake/Remodel to this whole album. Yes, that is right. The last few seconds alone of that first track blow this limp piece of dross out of the water. I am quite angry at wasting my money on this album. So much so, if i ever meet Bryan i will slap him around the head with his own lounge loafer slippers. Totally horrid album. Sort of like In Through The Out Door by Zeppelin. A band should know when to stop.
続きを読む
1人のお客様がこれが役に立ったと考えています
違反を報告
レビュー を日本語に翻訳する

Steve O
5つ星のうち3.0 Good album but different version of Angel Eyes
2015年8月16日に英国でレビュー済み
Amazonで購入
Manifesto was the first album by Roxy music I was able to connect with - the earlier stuff being a bit too "left field" for my taste.
I have long admired the trilogy of Manifesto, Flesh & Blood and Avalon. I bought Manifesto to rip to my mp3 player having owned the vinyl version since release.
Whilst Manifesto is still a good album I was disappointed to find that the version of Angel Eyes on this CD is massively different to that on my vinyl copy of the album. The CD is branded as "remastered" but it is not remastered, rather reworked. So be ready for disappointment if you want the album as it was.
続きを読む
3人のお客様がこれが役に立ったと考えています
違反を報告
レビュー を日本語に翻訳する
すべてのレビューを参照します
Amazonプライム会員ならお急ぎ便、日時指定便が使い放題
さらに、映画もTV番組も見放題。200万曲が聴き放題 。クラウドに好きなだけ写真も保存可能。
> プライムを無料で試す