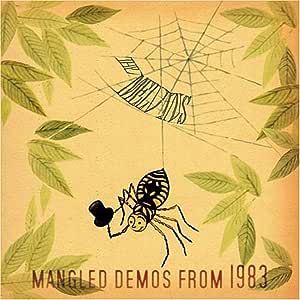 Recorded during the birth of 80's hardcore, the Melvins' Mangled Demos from 1983 will sit nicely next to your old Bad Brains and Corrosion of Conformity albums. There's some of that classic rockin' sludge we've grown to know and love (including a pre-Dale Crover version of "Set Me Straight"), but it's the fast, raw and hopeful ferocity of a time when hardcore was brewing, that really makes this release such a gem. Ipecac. 2005.

Mr. M. J. C. Jones
5つ星のうち5.0 the birth of a behemoth!
2009年4月26日に英国でレビュー済み
Amazonで購入
a superb retrospective from this fine band.If you are a fan of the Melvins in their more recent incarnation and have a taste for punk rock then this album is definitely worth a purchase.It begins with a highly amusing excerpt from a high school radio broadcast in which the announcer sounds more than a little apprehensive about the aural onslaught about to be unleashed.This sets the album off in fine style as we are treated to a collection of fast and furious numbers that simultaneously stand alone as lost classics(forgotten principles is surely a contendor for best punk rock song of all time)and provide a template for a band whose career has spanned 25+ years of warped and wonderful genius.Excellent as an introduction to the band (try gluey porch treatments next if this is the case)or if you are already familiar and want to hear how it was in the beginning;an essential purchase.
続きを読む
1人のお客様がこれが役に立ったと考えています
違反を報告
レビュー を日本語に翻訳する

D. K. Malone
5つ星のうち5.0 Remember punk? It's back! In pog form.
2005年6月8日にアメリカ合衆国でレビュー済み
Amazonで購入
Up until now, the oldest stuff I've heard from the Melvins was their three or four tracks on the Deep Six compilation from 1985. Much of the content here is material uber fans have probably heard before in one form or another from various bootlegs, but maybe not these exact takes from these exact sessions. A few songs appear more than once, from different sessions. It's a mixed bag. The recording quality is usually surprisingly very good for 20+ year old demos, but there are a couple of live songs sprinkled in that sound like they were recorded on a walkman or ghetto blaster. There's also a couple of tracks of radio correspondent chatter and the guys in the band bickering over a hamburger or something. The final song is an instrumental that sounds ~exactly~ like Green Day circa 1990. Not even kidding. If I had my copy of 39/Smooth with me right now, I could tell you which specific song it sounds like.

In any case, this is the Melvins when they were actually your average garden variety hardcore punk band, before Dale Crover joined. It's very cool to hear them before they found their niche and basically invented "grunge."
続きを読む
6人のお客様がこれが役に立ったと考えています
違反を報告
レビュー を日本語に翻訳する

JR Hayes
5つ星のうち3.0 MELVINS FANATICS ONLY!
2015年4月27日にアメリカ合衆国でレビュー済み
Amazonで購入
A neat snapshot of the original lineup (pre-drum god Dale Crover), the sound quality is not nearly as bad as the title would suggest. In fact, it's kind of amazing how good everything sounds considering how it was recorded. More of a historical document than a cohesive record, this one is fun, but not mandatory.
続きを読む
違反を報告
レビュー を日本語に翻訳する