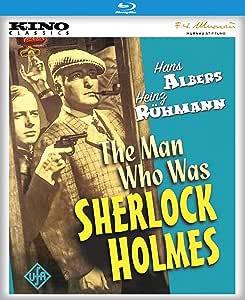 The Man Who Was Sherlock Holmes [Blu-ray]

Barbara J. Wertz
5つ星のうち5.0 Third Reich era comedy
2017年9月20日 - (Amazon.com)
Amazonで購入
Germans love to laugh, even during the Third Reich. THE MAN WHO WAS SHERLOCK HOLMES is a delightful comedy/mystery staring Hans Albers who was the most popular actor in Germany during the 1930’s and 40’s. He was so popular the Nazis were even willing to overlook his Jewish “girlfriend” who was essentially his wife.

As the film starts we meet two men, Morris Flint (Albers) and Macky McPherson (Heinz Rühmann) who are about to start on a venture that Macky is very worried will get them into big trouble. Albers is wearing a plaid coat and what the subtitles describe as a “deerstalker” cap. Actually, it’s one of those flat soft caps worn by men of all classes the world over under appropriate circumstances. He carries a pipe. Ruhmann carries a violin case.

They flag down a train at a station where it doesn’t usually stop and get onboard. The train crew, who have been reading Sherlock Holmes stories, immediately take them for Holmes and Watson, even though they insist that they are Mr. Flint and Mr. McPherson. There are two criminals on the train too. They also take the duo for Holmes and Watson and decide that it’s in their best interest to jump off leaving behind the claim tickets for their steamer trunks. The duo, under the pretext of investigating, take over the criminal’s compartment and all of the belongings left behind.

By not saying too much and allowing others to make assumptions the duo manage to get first class treatment wherever they go… including from the French police. They are soon very busy investigating an extremely complicated pair of interlocking mysteries, and they are very competent detectives.

I’ll stop there so I don’t spoil it for you.

During the Weimar Republic Germany’s major film studios grew to rival Hollywood for the quality of their productions. In the Third Reich it was considered very important to maintain this status, both for national prestige and to provide the German people with entertainment to keep their minds off things like politics. Some of the sets for THE MAN WHO WAS SHERLOCK HOLMES are very elaborate and worthy of a first class production. Cinematography is by the great Fritz Arno Wagner. All of the cast are very talented actors although the names are not familiar to this American 80 years later. The print used for this DVD is in excellent condition. The only drawback is that the dialogue moves so fast that the subtitles fly by. For those of us who don’t understand spoken German it’s necessary to keep one’s finger ready on the pause button.

I can definitely recommend this film, both as a film and for its historic interest. Fans of Hans Albers will really love it.

H. Bala
5つ星のうち5.0 Sherlock Holmes in 1937 Germany - kind of
2009年3月24日 - (Amazon.com)
Amazonで購入
It's easy enough to buy into this film's conceit: that, back in the day, there were many people in the world who believed that Sherlock Holmes was a real person. THE MAN WHO WAS SHERLOCK HOLMES tells of two down-and-out men who stop and board a train one dark night, one of whom is garbed in a deerstalker hat and checkered coat (instead of an inverness cape) and sports a pipe and a commanding presence. The clever thing with this is that the two men from the outset never actually claim to be the Great Detective and his biographer/assistant Dr. Watson, relying instead on people's assumptions.

So the word spreads that Sherlock Holmes is out and about, and the two men - real names, Morris Flint (Hans Albers) and Macky McPherson (Heinz Rühmann) - end up reaping the benefits, receiving deferential treatment and raking in the best that society has to offer. In very short order, they gain free passage on the train, room and board and adulation in a posh hotel, and elicit consternation from various of the criminal-minded. So successful is the charade that even the police end up requesting their services, presenting Holmes and Watson with a baffling case involving invaluable stolen stamps. To make it even less elementary, the duo find themselves also mixed up in secret codes and hidden caches of money, and tangling with young heiresses, counterfeiters and deadly bank robbers. Can the fake famous detective solve his cases before everyone (but especially the police) learn that Sherlock Holmes doesn't really exist?

This movie was a lot of fun. THE MAN WHO WAS SHERLOCK HOLMES (or DER MANN, DER SHERLOCK HOLMES WAR) is a lighthearted 1937 mystery film with a bit of farce thrown in. It stars Hans Albers (Munchhausen), one of the biggest actors in Germany in the 1930s and early '40s, and he is fabulous as the Holmes impersonator (the man has got that piercing stare down), deftly comic when called for, but then turning up the intensity in the taut moments. The first half hour or so plays it light and frothy, and there's almost an Ernst Lubitsch airiness to it, especially with the two scoundrels singing it up whilst they bathe in their own respective tubs. That scene would fit right in with Lubitsch's classic operettas. As the mystery develops, the tone becomes more serious, although the lightheartedness never does entirely go away. It turns out that Morris Flint's pretense at being a great detective isn't wholly a sham, as he readily pieces clues together throughout the course of the film.

It all climaxes with our two underhanded heroes facing insurmountable odds, followed by a breezy courtroom scene as they then try to talk their way out of imprisonment for their impersonations. Luckily for them, that old guy, who'd been showing up sporadically and loudly chortling onscreen, shows up one last time.

Just goes to show that, back in the pre-World War II era, German cinema wasn't quite all doom and gloom and propaganda. THE MAN WHO WAS SHERLOCK HOLMES is a lost cinematic gem that doesn't get old with repeated viewing. Sorry, but there aren't bonus features, other than scene selection and English sub-titles. I'm not an expert on the technical dvd aspects, but this film has been digitally remastered and looks crisp on screen, with the English sub-titles being very easy to read. If you're a fan of Sherlock Holmes and Dr. Watson, then you should check this out. If you're a fan of the dynamic Hans Albers, then ditto. I wouldn't be surprised if THE MAN WHO WAS SHERLOCK HOLMES is considered one of his best films.
続きを読む
36人のお客様がこれが役に立ったと考えています
レビュー を日本語に翻訳する

Yossarian
5つ星のうち4.0 A German Buddy Comedy-Mystery Film
2010年9月21日 - (Amazon.com)
Amazonで購入
This movie was a shot in the dark, having only seen Hans Albers in the Agfacolor feature "Munchausen" (1943), reading that he was the Gary Cooper of Germany and that he protected his Jewish mistress in defiance of nazi racial laws; all this was interesting stuff. But this film was a genuine surprise. The story is fast-paced with the wry humor of a Thin Man movie, with the two main characters Morris Flynn and Macky McPherson (posing as Holmes and Watson) going down a rabbit hole of adventure, intrigue, and eventual romance in the course of their subtrafuge, dodging the underworld (with an almost three-penny-opera pastische of characters)and the police but eventually emerging, battle-scarred but vindicated. The print is excellent, and the production value and acting is first-rate. For lovers of foreign film, this one is definitely worth seeing.
続きを読む
8人のお客様がこれが役に立ったと考えています
レビュー を日本語に翻訳する

harvey819
5つ星のうち5.0 INTERESTING VIDEO
2012年1月3日 - (Amazon.com)
Amazonで購入
This was a made German movie in 1937. The story was weak, but the staging and production were a good examples of the work that was being done before and during the World War II. I gave it a five for that reason, also because of setting and venue. If you are a true Sherlock Holmes fan this should be part of your collection. If you are buy a used video of any kind from Amazon also buy a DVD cleaning kit. Amazon has them from $5 to $50 a very good investment.
続きを読む
4人のお客様がこれが役に立ったと考えています
レビュー を日本語に翻訳する

Hashima Shata
5つ星のうち4.0 a fun Sherlockian derivative.
2014年5月18日 - (Amazon.com)
Amazonで購入
Like Without a Clue, or Sherlock Holmes younger brother , or the new set of films and series, this film is a derivative.
I would not spoil the film by describing the story line , but for any Sherlock Holmes fan it is a twist that is worth enjoying.
続きを読む
レビュー を日本語に翻訳する
Amazon.comのカスタマーレビューを見る(6) 5つ星のうち4.7
Amazonプライム会員ならお急ぎ便、日時指定便が使い放題
さらに、映画もTV番組も見放題。200万曲が聴き放題 。クラウドに好きなだけ写真も保存可能。
> プライムを無料で試す