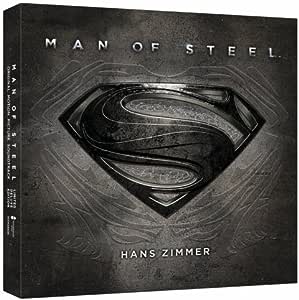 Deluxe two CD set housed in a special embossed steel case and a download of all songs in DTS Headphone: X, which reproduces a cinematic multi-speaker surround sound experience using only the user's headphones. Original score for the 2013 Zack Snyder-directed major motion picture composed by Academy Award, Grammy, and Golden Globe winner Hans Zimmer. "The challenges of creating a Superman score are daunting because Superman is so iconographic," said Snyder. "I really feel like what Hans created is perfect. Subtle and stirring, epic and commanding. Honestly, Hans crushed it." Disc One contains the score while Disc Two includes the epic track "Man of Steel (Hans Original Sketchbook)" which clocks in at over 28 minutes long. This exclusive track is performed solely by Zimmer, and allows listeners to experience firsthand his initial experiments with the film's music, which ultimately lay the foundation for the film's final score.

17曲目「What Are You Going To Do When You Not Saving The World?」

「Welcome to the Planet.」
ようこそプラネット（新聞社＆地球）へ
「Glad to be here, Lois」
ここ（新聞社＆地球）に居られて嬉しいよ、ロイス

「This is Clark Kent」
「Flight」
ピアノの静かな音と、スティールギターの重い音のメリハリの付け方なんかが良いです。

Mattlex
5つ星のうち4.0 Amazing Score! Packaging not what I expected
2013年6月21日に英国でレビュー済み
Amazonで購入
I was trying to decided if I should get the standard or the limited Deluxe Edition. In the end i decided to get this version and was pretty excited as I loved the music in the film and was particularly looking forward to the Man of Steel sketchbook on the bonus disc which is well worth the purchase

My Only issue with this (It would have been 5 stars as a product otherwise) When I read 'steel book' packaging I expect to get a steel book case like you do with other collectors/deluxe editions. Instead the CD case is made from glossy card made to look like steel.
To be honest as Limited Duluxe/collectors editions go, there isn't anything overly amazing in this package - 2 post cards, a very standard booklet and a digital download ticket.

That aside the music itself is easily 5 stars, Hans Zimmer has done an amazing job of capturing the emotion, power and excitement you would expect for a Superman Movie and made it modern and current.

If you are buying it for the music then you wont have any issues and will love it! Just don't buy it expecting anything special with the other extras.
続きを読む
7人のお客様がこれが役に立ったと考えています
役に立った
フィードバックを送信中...
フィードバックをお寄せいただきありがとうございます。
申し訳ありませんが、お客様の投票の記録に失敗しました。もう一度試してください。
違反を報告
レビュー を日本語に翻訳する

Camus Lights
5つ星のうち4.0 Super
2015年7月6日に英国でレビュー済み
Amazonで購入
For me, this is one of the best movie soundracks of all time. It is rare that a movie is truly elevated by, rather than it's events simply complemented by, the muscic of the score. This is one of those cases. It easily adds 2 stars onto an otherwise enjoyable, but not necessarily rewatchable film.

Disc 2 contains sketches by Hanz Zimmer for what would become the full versions on disc 1. Overall, these are simply rough cuts and not worth the extra expenditure to own the deluxe edition. For most, buying the regular OST (a five-star purchase at half the price) will be enough.

If you like Hanz Zimmer's work this and want more then turn to the Dark Knight Trilogy, Gladiator, The Thin Red Line, Pirates of the Carribeaan (from 2 onwards) and Amazing Spider-Man 2 for more excellent scores from one of the greatest (if not the greatest) cinema composers of his generation.
続きを読む
1人のお客様がこれが役に立ったと考えています
役に立った
フィードバックを送信中...
フィードバックをお寄せいただきありがとうございます。
申し訳ありませんが、お客様の投票の記録に失敗しました。もう一度試してください。
違反を報告
レビュー を日本語に翻訳する

I purchased this before watching the movie, but I only received it after coming back from holiday, having already watched the movie three separate times. It wasn't until the third watch or so, that some of this soundtrack stuck with me, and I started looking forward to getting home to listen to the soundtrack.

When I finally received it, my first thought was disappointment at the packaging: The sticker on the front (and in the description) says "Contains: LIMITED EDITION Steel Packaging. As such, I was expecting a steel book or tin case deal, but the album is actually a glossy cardboard foldout, with a raised \S/ symbol and lettering on the front. Once I had gotten over this fact, though, the overall impression of what I did get was rather good, and I think it simply should have been stated somewhere that it was a "steely design" or whatever, rather than actually being made from steel.

The soundtrack itself is brilliant, as the true test of any soundtrack is whether it brings you back into the movie, and boy did it. Certain key scenes played back in my inner theatre, and every musical beat is there. It was great listening to the bonus tracks available on "Disc 2: Experiments from the Fortress of Solitude", giving you an insight into how close Hans Zimmer was the first time around, before going into recording. "Flight", arguably the main theme of the movie is a brilliant, not too dark listen, logically also the title of the first disc.

Overall, a great soundtrack and a great edition for the Man of Steel fan. Considering that it's not much more expensive than getting the download, this is definitely the set to get.
続きを読む
役に立った
フィードバックを送信中...
フィードバックをお寄せいただきありがとうございます。
申し訳ありませんが、お客様の投票の記録に失敗しました。もう一度試してください。
違反を報告
レビュー を日本語に翻訳する

Matt
5つ星のうち5.0 Brilliant emotional score
2016年4月14日に英国でレビュー済み
Amazonで購入
I absolutely love the soundtrack to this film. It is epic and emotional, i think it is one of the best that Hans Zimmer has put out for a superhero film.
Obviously it is anchored by the majestic 'what are you going to do when you are not saving the world' which is by far the best piece in the film, and in my opinion one of the best movie charactor 'themes' in the last 15 years. but a
ll of the other pieces offer something different, there are quiet reflective moments, ominous threatening pieces and some beautifully tender bits as well.
This has become one of my favourite CDs for putting on in the background whilst doing things and i recommend it heartily
続きを読む
役に立った
フィードバックを送信中...
フィードバックをお寄せいただきありがとうございます。
申し訳ありませんが、お客様の投票の記録に失敗しました。もう一度試してください。
違反を報告
レビュー を日本語に翻訳する

Kexs
5つ星のうち5.0 A fantastic Soundtrack
2013年10月8日に英国でレビュー済み
Amazonで購入
for a fantastic movie. When I read that Hans Zimmer was responsible for the movie soundtrack I knew it would be good. I had very high expectations when I watched the movie in the cinema and I was not disappointed. The movie would probably be not as good without the music. The songs were well placed. It fit perfectly to the situation, it made you somehow get emotionally involved with this, as you were expecting the next killing blow, or whatever was happening.
Now, that i am listening to the music at home, it makes me smile. The music practically drags you in and it is great listening to it.
Since this is the limited edition, I should say something about the extras... they are not really necessary, if you ask me. They are alright and nice to have, but nothing really important. You are not missing anything, if you buy the regular Soundtrack in a store.
続きを読む
役に立った
フィードバックを送信中...
フィードバックをお寄せいただきありがとうございます。
申し訳ありませんが、お客様の投票の記録に失敗しました。もう一度試してください。
違反を報告
レビュー を日本語に翻訳する
その他の国際レビューを読み込む

Mickalmus
5つ星のうち4.0 Nice revamp of Superman's themes
2013年11月5日に英国でレビュー済み
Amazonで購入
I enjoy and listen to this months after buying it. Superman's theme has a slight haunting feel, some elements of an emerging hero and a touch of sadness (well he is the last of his kid and being so powerful will make him very alone).

I've not listened to the 2nd disc so much but I think the booklet explains more about those tracks which I haven't had time to read through as I usually listen on commute to places.

Hans Zimmer has done well yet again with a movie soundtrack. I didn't give it 5 out of 5 as I still prefer his Batman Begins/Dark Knight/Dark Knight Rises soundtracks plus the Man Of Steel theme repeats a bit too much through this sountrack which can get a little boring.
続きを読む
役に立った
フィードバックを送信中...
フィードバックをお寄せいただきありがとうございます。
申し訳ありませんが、お客様の投票の記録に失敗しました。もう一度試してください。
違反を報告
レビュー を日本語に翻訳する

Euby7
5つ星のうち5.0 One of the best!
2017年1月15日に英国でレビュー済み
Amazonで購入
The Man of Steel soundtrack is possibly one of the best ever composed. The music just hits the spot and fits the mood of the movie so well! I'm upset i didn't realise the track "Arcade" wasn't on here and just on the deluxe edition, but pretty much everyother song on this album is crafted to perfection. There is something here for everyone. This is one of the soundtracks i relax to while i'm working and it just takes me to another place. Hans Zimmer is a master!
続きを読む
役に立った
フィードバックを送信中...
フィードバックをお寄せいただきありがとうございます。
申し訳ありませんが、お客様の投票の記録に失敗しました。もう一度試してください。
違反を報告
レビュー を日本語に翻訳する

LordReserei
5つ星のうち5.0 Epic score for an epic film.
2013年7月3日に英国でレビュー済み
Amazonで購入
What else is there to say? The title explains itself pretty much.

Any negatives that I could say are app related. You need to download an app for iOS and Android to listen to the DTS Headphone version, but only a few select Android devices are supported - the Nexus 7 isn't one of them. The required app for gaining exclusive content is also flimsy, it crashes on a Nexus 7.

That said, the content given in the box is high quality, and the packaging itself is too. Is this worth the price tag? I don't regret it, but I guess it's for you to decide.

RAW1987
5つ星のうち5.0 A terrific gift set for anyone who's a fan of Hans Zimmer or action packed scores
2016年6月18日に英国でレビュー済み
Amazonで購入
This is a terrific soundtrack!

I recently saw Hans Zimmer in concert at the Birmingham Barclay Arena and every time I listen to his musical scores I am blown away.

The set is very nicely presented up and the additional pieces of documentation add a little more information about the production o the movie and the composing of the score.

Am Sanders
5つ星のうち4.0 Another winner by Zimmer
2013年6月28日に英国でレビュー済み
Amazonで購入
Another outstanding score by the amazing Hans Zimmer to add to his list,...this man's a genius!
Fave tracks for me Disc 1: What Are You Going To Do When You Are Not saving The World & Disc 2: Arcade,...both of which were used on the final two Man Of Steel Trailers.Best turned up REALLY loud on a 5.1!

P. Hall
5つ星のうち5.0 What a bass line
2014年5月30日に英国でレビュー済み
Amazonで購入
Opted to buy the steel case limited edition of this album as is comes with additional 'sketches' of Hans Zimmer's finished work. First thing is dispel any and all ideas of John Williams' theme's, this one start slow and low and soars from there.
The music is sweeping and atmospheric; from the angelic voices through to the underlying bass and up!

With the Steel book copy came the chance or those with the right mobile phone and a set of Dolby head phones to download a DTS version, as to when that expires, can not see. This is one soundtrack I'd love to have on SACD if only to hear the uncompressed surround sound version.

Mr. M. R. Naylor
5つ星のうち3.0 Man Of Steel: Original Motion Picture Soundtrack (Limited Deluxe Edition)
2014年6月24日に英国でレビュー済み
Amazonで購入
Was disappointed with the lack of a dynamic main theme, and the whole soundtrack sounds dull and flat. I'm a life long fan of Superman and this score had a lot to live upto when comparing it to the John Williams masterpieces. It didn't deliver, all the tracks sound the same, and seem far too long, I think that given the right soundtrack even the movie might have been slightly better.
続きを読む
1人のお客様がこれが役に立ったと考えています
役に立った
フィードバックを送信中...
フィードバックをお寄せいただきありがとうございます。
申し訳ありませんが、お客様の投票の記録に失敗しました。もう一度試してください。
違反を報告
レビュー を日本語に翻訳する