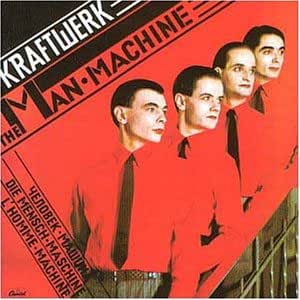 Although Not Drastically Different to the Existing Versions, These Australian Exclusive Tour Editions Are a Lot More Attractive. The Artwork Has Been Updated to Include More Photographs and Images.

Although Not Drastically Different to the Existing Versions, These Australian Exclusive Tour Editions Are a Lot More Attractive. The Artwork Has Been Updated to Include More Photographs and Images.

John David Charles Hilton
5つ星のうち3.0 The moment between ground breaking and comfortable nostalgia
2020年3月8日に英国でレビュー済み
Amazonで購入
Released in 1978, following the great trilogy that was Autobahn, Radio-Activity and Trans-Europe Express, Man Machine saw Kraftwerk lose the edge of the TEE and replace it with the plastic percussion and radio friendly synths that would serve from then on (Electric Cafe excepted.)
It's a good album, but its easy listening ambience foreshadows the retreat into lighter, less challenging territories.
Compared with what other electronic acts were releasing at the time, it sounds tame and too eager to please.
Kraftwerk have spent the last few decades pretending that their first three albums don't exist. Presumably this is as they are too experimental to fit into the nice safe nostalgia of The Catalogue.
続きを読む
4人のお客様がこれが役に立ったと考えています
違反を報告
レビュー を日本語に翻訳する

The Punk Panther
5つ星のうち5.0 Spacelab...
2019年6月1日に英国でレビュー済み
Amazonで購入
Released at the height of punk, before most post-punk had appeared and before new romanticism, this album, like its predecessor, "Trans-Europe Express", from 1977, blazed a trail for those genres. Funnily enough, though, this detached, cool German electronic music fitted in quite well with the punk thing. Most soon-to-be post punkers loved this. It was hugely influential on groups like Ultravox, Orchestral Manoeuvres In The Dark, Gary Numan, The Human League, early Simple Minds and New Order, amongst many others. They made pop songs out of extended electronic music like this. It was no surprise, therefore, that the album was successful in the UK in 1982, not in 1978.

Personally, although I enjoy a track or two of it every now and again, a whole album is probably too much. It certainly was in 1978.

"The Robots" starts the album in unsurprisingly, staccato, robotic, jerky fashion, the sound being all electronic keyboards and synth drums before the futuristic, electronically-distorted "we are the robots" vocal comes in, Dalek-style. "Spacelab" has that "Trans-Europe Express" chugging train feel about it. "Metropolis" gives us lyrics again, at least a Teutonic, doleful chanting of the song's title as the synthesisers rapidly take us through the Düsseldorf night. Of course, David Bowie and Brian Eno will have loved this.

"The Model" was the group's surprising bit chart hit. Maybe not so surprising, as it has a totally infectious beat, quirky vocal and trendy, fashion-influenced lyrics. The synth riff opening is instantly recognisable and is often used as a soundtrack to items about fashion or new technology and so on. The German accented vocals were highly appealing too. "Neon Lights" continues the slightly more poppy feel with vocals once more (at least at the beginning, it's a nine minute track) and a synth riff the like of which would be repeated a lot in the early eighties. "The Man Machine" had some of the sort of sounds David Bowie used in the "Heroes" and "Low" instrumentals. Its vocals are shrouded by sound effects over a stabbing slow keyboard loop.

As I said, a bit of this in small doses and I enjoy it. It is certainly clever and atmospheric. I couldn't listen to nothing but this, though. The sound quality is excellent by the way.
続きを読む
1人のお客様がこれが役に立ったと考えています
違反を報告
レビュー を日本語に翻訳する

The Captain
5つ星のうち5.0 We Are The Robots
2020年9月5日に英国でレビュー済み
Amazonで購入
Kraftwerk are one of my all time favourite bands, I have all their albums and have just updated to these remastered CD's. Quality of the remastering is superb and The Man-Machine is one of their finest albums. I first heard this just after it was released back in 1978 and bought the LP as soon as I could visit a record shop. It includes their number one single, The Model, but the best track, in my opinion, is Spacelab. The whole album is a fine piece of work and highly recommend it.
続きを読む
違反を報告
レビュー を日本語に翻訳する