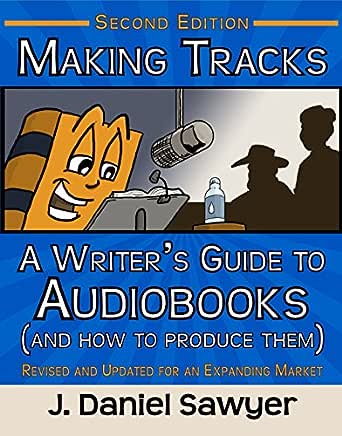 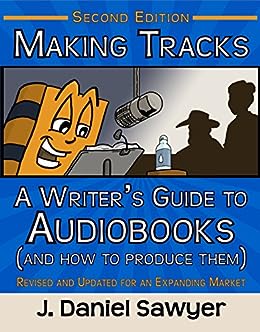 Making Tracks: A Writer's Guide to Audiobooks (and How to Produce Them): Second Edition (English Edition) Kindle版

A longtime award-nominated audio/video producer and tech journalist-turned novelist, J. Daniel Sawyer's abusive behavior toward the English language finally landed him in trouble with the release of his hard-boiled Clarke Lantham Mysteries. When not speculating about crime and punishment, or laying out twisted visions in his sci-fi thriller series The Antithesis Progression or his cabin fever comedy Down From Ten, he bends his mind toward corrupting his fellow authors with educational books like Throwing Lead: A Writer's Guide to Firearms (and the People Who Use Them) and Making Tracks: A Writer's Guide to Audiobooks (and How To Produce Them). On the rare occasion that he escapes his cavernous studio to see the light of day, he slips away into the wilds of the San Francisco back country where he devotes his energies to running afoul of local traffic ordinances in his never-ending pursuit of the ultimate driving road. Should you be so inclined, you can communicate with this shady character, as well as find stories, podcasts, articles, and other literary abominations at http: //www.jdsawyer.ne --このテキストは、paperback版に関連付けられています。

Michael La Ronn
5つ星のうち5.0 Covers a lot of ground in an accessible way
2014年4月4日にアメリカ合衆国でレビュー済み
Amazonで購入
I was in the market for an audiobook version of my short story collection recently, and I wanted to find a resource that would help me understand exactly what I was getting into.

This book is highly technical, and it is geared toward professional narrators in training, or for authors who want to record their own audiobooks. It covers everything you need to know: the state of the audiobook market, barriers to entry, proper recording technique (even hygiene), selecting the right equipment, editing, mastering, and all other aspects of the business side of audiobooks. It's a must-have for anyone looking to do their own audio.

If there's one thing I took away from the book, it's that I don't have the time, resources, or patience to do an audiobook myself. I'm glad I spent the money on this book to learn that rather than jumping into it and finding out first-hand. Let that be a warning to anyone else considering doing their own audio.

But for an author like me looking to outsource my audio, there wasn't much for me here. But I have a bit of an audio background, and I can definitely say that Sawyer's advice is sound, especially with recording, production, and post-production. This is why I gave it five stars, because it's perfect for its intended audience.

What would have made this book a six star book though, would have been a section on marketing your audiobooks and getting them out there. With the rise of ACX, most people are outsourcing their audio these days, and the key issue for them is how to get the book in front of prospective readers, especially if they're under a royalty-share agreement, where the responsibility falls on both the author and narrator to promote the book. I haven't seen a (good) book on this topic yet, if there's anyone who could do it right, it's probably J. Daniel Sawyer. And it fits in with the book's target audience, too. That's a minor suggestion for an otherwise great book.

This was a good read, and if I ever decide to do my own audio, this is the book I'd reread.

Dan Absalonson
5つ星のうち5.0 Invaluable Resource AND an Enjoyable Read!
2013年9月13日にアメリカ合衆国でレビュー済み
Amazonで購入
I picked this book up because I landed a gig narrating my first audio book, and I knew from hearing the author on several podcast interviews that he knows his stuff. It doesn't hurt that he's also an author of several other works including fiction - so I knew the dude knows audio and how to write - the perfect combo for writing this book. The great thing about this book is that it was taylor made for someone like me, a person wanting to record and produce audio books. This is not a manual for an audio engineer because you don't need to be an audio engineer to record a solid audio book. That said you do need to know some stuff and this book really delivers on that. It's one thing to be able to record and edit audio, that's easy, but once you want to master your sound file or if you have to mess with the EQ a bit because your recording space is a shelf in your closet surrounded by foam, shirts, and blankets rather than a studio - you better know what you're doing. When it came to EQ I didn't know what I was doing. When it came to noise reduction - I thought I knew what I was doing but I actually had a lot to learn. This book gave me the confidence to record a professional quality audio book, and with its help I did. When I turned in my audio files to ACX there were no tweaks needed. They took them as is because I was able to get the best out of my microphone and recording set up with the knowledge I gained from this book. So there's a lot of great stuff to help you understand the technical parts of recording, but he gets into a ton more including helpful images. From technique for when you're recording, what makes a good recording space, all about distributing your audio book for when it's finished - the list goes on.

Even if you're like me and you've had experience narrating fiction or non-fiction for a few years, you need to get a copy of this book. It will take you from novice who fiddles with settings until you think you have the best settings to someone who knows what the heck they're doing. Fantastic book and like I said well written and very funny so you'll really enjoy the read. This is no textbook. More like listening to your favorite teacher lecture on something they're passionate about while cracking jokes that are actually funny to keep you there with them in the material.
続きを読む
3人のお客様がこれが役に立ったと考えています
違反を報告
レビュー を日本語に翻訳する

When I was a pre-teen, my favorite book was the Boy Engineer. As a kid, I was always building things. In about the third grade I built my first telegraph. About that time, my parents gave me a crystal radio kit and I began listening to The Joy Boys, Ed Walker and Willard Scott, on WRC radio through my ear phones . My fascination with the show went on for years and my dad actually took me down to the studio one time to meet them. Later in graduate school, I spent a lot of Saturday evenings listening to a Prairie Home Companion with Garrison Keillor .

Although I have never purchased an audiobook, most of the senior citizens that I know have. Commuters and road warriors are two other obvious listening groups. Successful authors that I know are sensitive to the audiobook market because it opens up an entirely new reading market for their content . They often end up being addicted to podcasting for the same basic reason and because much the same equipment is needed. Interestingly, the audiobook industry started out as a government program to produce audiotapes to aid the blind (xvii; 22). Now, instead of tape, many books are entirely electronic (13).

Audiobooks require a bit of time and effort. Sawyer estimates that production of an audiobook requires 4 to 8 hours of work for each hour of finished audio. Reading at a rate of 8,000 to 9,500 words per hour, that means that an 80,000 word novel is somewhere between 33.6 to 80 hours of production work—recording and editing, assuming that you know what you are doing (3).

If you are producing an audio drama, not just a simple reading, a lot of different roles are required—much like producing a movie. Think of the production including: a casting director, a Foley artist (sound effects person), a music director, director, production engineer, art director, and post production engineer (9-12). Details. Details. Details. My head was spinning as I began reading…A recent book trailer shows this kind of workmanship .
Daniel Sawyer describes himself as “a longtime award-nominated audio/video producer and tech journalist-turned novelist” . He writes in 6 parts divided into 18 chapters, including:

Sawyer’s discussion is detailed and engaging.

Under manage the production, Sawyer cites 5 points of vocal production:

Now is a good time to refresh the lessons that your voice instructor gave you in school. For example, the best way to read is standing up. Received pronunciation (BBC English) is a middle-class, Ohio accent. Sawyer suggests that speaking a mouth full of marbles is a good cure for “mush mouth” (49). Speak with conviction with good annunciation! (59) The list of helpful hints goes on and on.

Daniel Sawyer’s Making Tracks is a gold mine for audio book producers, but others with sound production may also want to pick up a copy. Microphones, cables, sound boards, and sound-editing software are all discussed in plain English. Making Tracks is interesting reading.

Matthew Wayne Selznick
5つ星のうち4.0 A Great Beginner's Resource With Some Great Tips
2013年6月6日にアメリカ合衆国でレビュー済み
Amazonで購入
I was a first-wave (2004) podcaster who stumbled into audio production, learning as I did my music podcast and, later, one of the first podcast novels. Sawyer came later to the game, and his perspective shows in his slightly biased version of audiobook / podcasting history, but he's got a much, much deeper well of audio engineering experience than I'll ever have, and that's where this book really shines.

I found straightforward, easily explained tips in this book that you'll otherwise spend hours searching for in audiophile forums or sound engineering textbooks, and that's absolutely worth the price of admission. Sawyer should create a spin-off product from the book that's just a quick-tips cheat sheet of audio production and give it away to beginning podcasters and wannabe voice artists as an entry drug to buying this book.

Bottom line: worth the purchase. You'll want to print out sections to keep next to your mixing board or DAW.
続きを読む
4人のお客様がこれが役に立ったと考えています
違反を報告
レビュー を日本語に翻訳する

Anthony StClair
5つ星のうち4.0 Helped me make sense of what it takes to produce awesome audiobooks
2014年6月28日にアメリカ合衆国でレビュー済み
Amazonで購入
This excellent book will help any author either take the plunge on self-producing audio, or understanding what to know and ask when hiring it out or seeking a collaborative partner. (There are some minor typos here and there, which I think can be a touch distracting and hopefully will get fixed in a future update.)

I came to this book as a result of the author's interview on The Creative Penn podcast for authors. Sawyer's discussion of the technical and creative aspects of audiobook production were fascinating and approachable. Reading the book, I felt the same way. I am by no means an audiophile or sound expert, but after reading the book I could understand the ins and outs of what it takes to do a quality job on an audio production of any scale.

As an author, audiobooks are a big priority for me in 2015 (I have 3 titles that I want to bring to audio). While I don't think I would want to tackle doing the production on my own (just as I hire out copy editing and book cover design), reading Sawyer's book will help me find a good audio partner, know what to look for, and be able to more effectively collaborate so that when my audiobooks come to market, they will rock the reader's ears. In a good way.
続きを読む
違反を報告
レビュー を日本語に翻訳する
すべてのレビューを参照します
click to open popover
Amazonプライム会員ならお急ぎ便、日時指定便が使い放題
さらに、映画もTV番組も見放題。200万曲が聴き放題 。クラウドに好きなだけ写真も保存可能。
> プライムを無料で試す