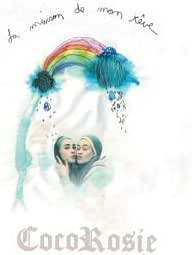 Coco Rosie is Bianca and Sierra Casady. Sierra sings and plays guitar and flute while Bianca sings and handles percussion. "La Maison de Mon Reve" is deceptively innocent; enchanting and sweet yet eerie and twisted. An acoustic guitar paints melody through a haze of cryptic sounds and perversely angelic voices.

CocoRosie is Bianca and Sierra Casady. Sierra sings and plays guitar and flute while Bianca sings and handles percussion. "La Maison De Mon Reve" is deceptively innocent; enchanting and sweet yet eerie and twisted. An acoustic guitar paints melody through a haze of cryptic sounds and perversely angelic voices.

Mabu
5つ星のうち4.0 Wonderfully weird
2009年9月30日に英国でレビュー済み
形式: CDAmazonで購入
This was the first ever really weird album I bought.
I now own three of theirs.
Fantastic. If you like any of CocoRosie's other stuff or if you want to diversify yor tastes into something with eclectic sounds, irregular rhythms and intense, intimate singing tht borders on lullebies for adults then this is it.

Be careful who you lend it to, if you mind what people think about you!

PickyPicky
5つ星のうち5.0 A true diamond in the rough
2013年6月7日にアメリカ合衆国でレビュー済み
Amazonで購入
I love this album. I can't fully explain why. There is the haunting beauty of Bianca and Sierra's vocals; the hipster-esque novelty behind-the-scenes context (Bianca met up with Sierra, who was training as an opera singer, in Paris and together they recorded the album in Sierra's tiny apartment's bathroom using toys they bought at a garage sale); or, the haunting, poignant, almost sinister undertone coursing through the whole thing, with mentions of Freud and the hypocrisy of the Bible Belt ...yet the album is clearly greater than the sum of its parts. I haven't heard the newest (2013) CocoRosie album Tales of a Grass Widow, but this is the defending champion and stands head-and-shoulders above any of their other offerings. It's two women with beautiful voices, accompanied by a guitar and singing songs about rape, domestic abuse, and being a repressed housewife. It's also somehow more than that, taking on an ethereal nature with help from their musical toys and creative spirits. This is exactly the kind of album that will be hailed as a masterpiece 20+ years later because people were too stupid and short-sighted to appreciate it when it was released.

As far as having the album on vinyl, it is what it is. Such a low-fidelity source benefits little (if at all) from being pressed to vinyl, as far as an audiophile might be concerned. If you love records, then by all means buy the LP. The break between "Not For Sale" and "Tahiti Rain Song" (end of Side A and beginning of Side B, respectively) is at worst unobtrusive, and unlike other afterthought pressings (Blood Visions by Jay Reatard springs to mind, where a 2-second pause was carelessly inserted between every song), the vinyl is no worse than the CD. Do you *need* to have it on vinyl? Only to round out your collection. The main drawback is that you may receive a warped pressing (which you can send back for a return or exchange, shipping paid by the seller).

I wholeheartedly recommend this album. It's one of my favorite albums of all-time, and certainly among the best of a decade that also gave us (almost) the entire White Stripes discography. It's like a toy you've never seen before, a trinket you can't put down, a piece of art you find at a thrift store, or an anonymous love letter made from construction paper. It's a true diamond in the rough.