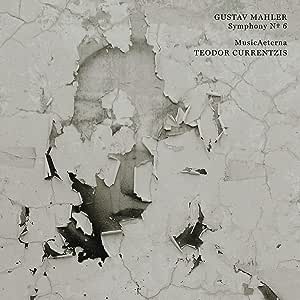 STEWART CROWE
5つ星のうち5.0 A Tale of 3 Performances-Currentzis versus Rattle
2018年11月13日に英国でレビュー済み
Amazonで購入
I had intended my review of Rattle’s BRSO Das Lied von Der Erde to be my last, and had made my peace and said my goodbyes so to speak, but it seems that Fate (and a great many well wishers!) has decreed other plans, so here I am “back from the dead.”

Though the compositions of Bruckner and Mahler are often considered together (cf. The Bruckner-Mahler Society of Vienna), the symphonies of Mahler do not have the editorial complications of those of Bruckner-but the 6th comes closest to providing those well known headaches.
The primary issue relates to the order of movements 2 and 3, with a subsidiary one of how many hammer blows in the finale. Unfortunately much of the source of supporting evidence emanates from the composer’s widow Alma, who has been shown to be at best unreliable, at worst “casual with the truth” often for self-serving reasons. There is absolutely no evidence that the second great theme in opening movement represents Alma other than Alma’s say so, but it has become accepted as the “Alma Theme”. Alma’s assertion that the Scherzo represents their 2 children tottering unsteadily across a sandy beach cannot be true-their second child was not born when Mahler composed it!

It is certain that Mahler composed the work with the Scherzo second, citing it as a thematic and rhythmic extension of the first-but during rehearsals changed his mind, and the composer never conducted the work other than in the Andante second, Scherzo third format.
A telegram from Alma to Mengelberg stating “he’s changed his mind again-“it is Scherzo second”-is the primary evidence outside of the musical one for that order, and thus the most familiar version we listeners are used to is the 1963 Erwin Ratz New Edition-Scherzo second, 2 hammer blows!
Before reviewing the 3 discs under consideration, I would like to draw attention to the Simone Young Hamburg recording on OEHMS. Firstly it is a fabulous performance and recording, but more especially she uses Mahler’s original performance score, not the later published version, with the Andante second and the 3 Hammer blows, boosted in the first blow by bass drum and tam-tam as Mahler performed it. The differences in compositional material are startling, especially in the finale and it now ranks alongside the Bernstein VPO as a “must hear” version.

I have been less than enthusiastic about much of Rattle’s recorded output with the BPO, but this set marking his final performance as Music Director is a winner in every sense.

The 1987 performance has been available from Germany since 2002 by special import, but I can attest that this new remastering direct from the RBB tapes is in a different league-indeed it can hold its own technically against both 2018 recordings. This was still –just-Karajan’s BPO and the playing has a rich sonority and depth that is a joy in itself.

Rattle takes the opening march at a steady, heavy pace-not too slow-but articulates the rhythmic nuances admirably. He indulges himself in the swell of the “Alma Theme” (sic), and throughout the entire work beauty is of the utmost, with Rattle not feeling the need to whip up tempi or emotion. This reading is nearest to that of Karajan (no surprise really)-it is glorious. It is performed from the 1963 Edition but with Andante second and 2 hammer blows

The 2018 version uses the New Critical Edition and finds us with an even heavier tread, with a brighter more brilliant BPO indeed playing like musicians possessed, and there is a greater transparency to the recorded sound with more detail prominent than in 1987-but with less warmth and sheer weight of tone. It has been suggested in another review that this reading is sluggish and lacks drama compared to the Karajan. This is just not true, and as famed nerd with a shocking number of recordings of ALL Mahler’s works (over 40 of this symphony), I can attest that Rattle’s additional freedom of expression, applied rubato and highlighting of drama make this version-AND the 1987 version-both preferable to Karajan, much though I love his version (best heard in the Japanese SHM-CD remastering).
(I can be a nerd so you don’t have to be.)
The presentation is beautiful as is always the case with these BPO sets, and includes a Documentary Bluray which many will have already seen. I highly commend this set as worthy of the highest recommendation, far more dramatic than the Abbado BPO version which is beautiful but anodyne and superior even to Karajan. Bernstein VPO is “hors concours”, Sinopoli live with the SWR Stuttgart Symphony Orchestra live (on Weitblick) and the aforementioned Simone Young are among those I consider indispensible.

This brings us to the Currentzis! There has been some resistance to the very idea of Currentzis-the young whizzkid Greco/Russian conductor who has benefited from the largesse of at least one Russian Oligarch who has enabled Currentzis to transform a provincial opera house and its orchestra based in Perm into a world class musical edifice.

His first act was to sack the entire orchestra, and he has now rebuilt it into the Musica Aeterna of international renown! It has been suggested that it be renamed Musica Oligarchia, but surely all that matters is the quality of the music making?
This has been demonstrated amply on a series of scintillating recordings on Sony, including a Tchaikovsky 6 and a Rite of Spring which revivify these well know works and which make us listen anew.
The new studio recording again from 2018 is the conductor’s first foray into recorded Mahler, and he uses the New Critical Edition but with the Scherzo second! This symphony really is mix and match-and as Mahler himself suggested it works both ways.

I was expecting a breakneck rush into the opening march-but to my surprise the tread is slow-slower than Rattle-but with brittle incisive articulation on the low strings. Lyricism flourishes in the Alma Theme. After the recapitulation, the march treads starts slower than ever, but then the tempo suddenly increases-and this is a feature of this reading. In what is otherwise a remarkably conservative reading, occasional flashes of the Currentzis extremes occur-a tempo whipped up, brass particularly raucous-but overall it is a finely tuned, dramatic reading expertly played and superbly recorded in the somewhat forbidding sounding “ Moscow House of Music “-( Don’t play any wrong notes!).

Currentzis goes to town on the neuroses of the finale opening without quite the nightmarish effect of Bernstein/VPO-but the 2 hammer blows are a little underwhelming in their effect.

A review on amazon.com extols the virtues of this performance above all others, in conception and playing. This is not justified-it IS very fine and joins the ranks of the very best without surpassing them. It is certainly a fascinating and refreshing approach, and remarkably sane for Currentzis!
For the additional polish and weight of tone the BPO win the day-when I’m listening to the 1987 recording I prefer it, and the same for the 2018- that’s how good they are.

Ideally both sets are a must, but I suppose the Currentzis wins on price and it has sufficient interpretative new insights to warrant the safer recommendation, but 5 Stars to both!
I hope this helps. Stewart Crowe.
続きを読む
26人のお客様がこれが役に立ったと考えています
役に立った
フィードバックを送信中...
フィードバックをお寄せいただきありがとうございます。
申し訳ありませんが、お客様の投票の記録に失敗しました。もう一度試してください。
違反を報告
レビュー を日本語に翻訳する

W. J. A. Johnston
5つ星のうち4.0 The jury is out
2019年3月6日に英国でレビュー済み
Amazonで購入
I do love Currentzis's sense of drama. Whereas, however, that sense of drama felt absolutely appropriate to his recording of Tchaikovsky's 6th, here something slightly more subtle is maybe required. Whereas Bernstein or Papano sweep me along on Mahler's emotional wave - and it's a long one! - with Currentzis I feel more as though I am being overwhelmed, battered and drowned. It's a great performance, and I just can't quite make up my mind about it.
続きを読む
3人のお客様がこれが役に立ったと考えています
役に立った
フィードバックを送信中...
フィードバックをお寄せいただきありがとうございます。
申し訳ありませんが、お客様の投票の記録に失敗しました。もう一度試してください。
違反を報告
レビュー を日本語に翻訳する

liberta
5つ星のうち5.0 Excellent
2018年11月24日にカナダでレビュー済み
Amazonで購入
A You Tube check of Mr. Currentzis' live performances reveals him to be a wild, passionate, and sometimes 'over the top' type of conductor - a bit like Dudamel and Nezet-Seguin. His hand picked group of Russian musicians are first rate players who are evidently very enthusiastic to work with their flamboyant conductor.
Personally I find his physical behaviour ultimately distracts me from just listening to the music.
A disc exhibits just the sound, and I'm very glad of that.
This is an excellent performance of a very great and seminal work of Mahler's life.
There are many wonderful recordings of this symphony, and Currentzis matches them with clean modern sound.
続きを読む
役に立った
フィードバックを送信中...
フィードバックをお寄せいただきありがとうございます。
申し訳ありませんが、お客様の投票の記録に失敗しました。もう一度試してください。
違反を報告
レビュー を日本語に翻訳する
その他の国際レビューを読み込む