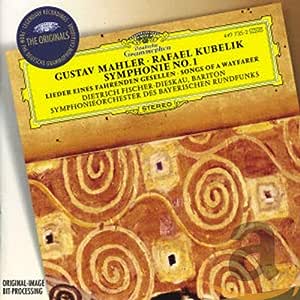 Here's a delightful coupling: Mahler's First Symphony and the song cycle that donated many of its themes to the larger work. Best of all, both performances are superb. Rafael Kubelik is the dark horse among Mahler conductors. His interpretations are always fresh, unforced, and seemingly without exaggeration. However, he knows how to build a climax, and his generally swift tempos never permit a minute's boredom. There are many moments to cherish in his performance of the symphony, not least the delicious woodwind playing and the tangy trumpets in the third movement's Fiddler on the Roof music. Reissued at midprice in excellently remastered sound--better than most new digitals in many respects--this is a performance that remains one of the best, and as a coupling it's unbeatable. --David Hurwitz

Doug
5つ星のうち4.0 Mahler symphony No 1
2010年1月18日に英国でレビュー済み
Amazonで購入
I had an old recording of this symphony from the 1960s which effectively put me off Mahler for years. Despite gradually coming to him via other works this remained of limits until I attended a concert (BBC SSO) where it was positively magical. This may or may not be the best recording available but it is pretty good and has continued the rescuing of Mahler for me.
続きを読む
2人のお客様がこれが役に立ったと考えています
役に立った
フィードバックを送信中...
フィードバックをお寄せいただきありがとうございます。
申し訳ありませんが、お客様の投票の記録に失敗しました。もう一度試してください。
違反を報告
レビュー を日本語に翻訳する

Joseph Kline PhD, MD
5つ星のうち5.0 One of the most amazing performances ever with sound to match
2014年5月19日にアメリカ合衆国でレビュー済み
Amazonで購入
Rafael Kubelik leads the Bavarian Radio Symphony Orchestra in this remastered Gustav Mahler Symphony 1 originally released in 1968. Songs of a Wayfarer with Dietrich Fischer-Dieskau occupies the remainder of the disc. I cannot speak to the effectiveness of the remastering, but the sound on the present disc is superb.

Kubelik uses middle-of-the-road tempi for the 1st movement which is given a rather casual-appearing reading until the finale of the movement. Interestingly, Kubelik's live Munich recording with the BRSO in 1979 (on the Audite label) clocks in at over a minute faster. The 2nd lively movement of Symphony 1 is just plain fun with its dance-like motion evolving into crescendoing dynamics and tempo and then back to a waltz. Intervals of perfect fourths back and forth until one last crescendo into the ether. Then comes Mahler's well-known take on Frere Jacques in minor key. The proverbial bolt of lightning from a dark cloud opens the fiery 4th movement with its contrasting lyrical passages. Throughout the final movement, Kubelik has the music well in hand despite appearances of the music having its own life quite detached from the conductor's baton.

The recording's sound completely belies its age. Occasionally the violins are a bit harsh. The orchestra is well-balanced. The brass are exceptional. This is an amazing performance of one of the few extraordinary first symphonies of any composer. Kubelik and his Bavarian Radio Symphony Orchestra perform splendidly, making this one of the finest performances ever. Very highly recommended!!!
続きを読む
6人のお客様がこれが役に立ったと考えています
役に立った
フィードバックを送信中...
フィードバックをお寄せいただきありがとうございます。
申し訳ありませんが、お客様の投票の記録に失敗しました。もう一度試してください。
違反を報告
レビュー を日本語に翻訳する

Geoffrey Braswell
5つ星のうち3.0 I bet their second albem will be better!
2018年8月8日にアメリカ合衆国でレビュー済み
Amazonで購入
This record was recommended to me by my good friend Bernard O’Hanlon, who really treasures it. I sorta like it too, but it is kinda strange. It starts out really quiet in the first song, and gets loud, especially towards the end. I think they should try it the other way with a good fade-out ending like in Cyndi Lauper’s “Time After Time” or the Police’s “Every Breath You Take. Imagine if Gustaf Maler had started with that really loud forth song, and the orchestra faded out like the first song starts? And that goes to show my second point: this album is arranged wrong. Getting songs in the right order is really important, and Maler and the Rundfunk Orchestra could use some help here. But--what a cool name for a band! Classy, like ELO, or like that other great German band, Enigma. The music sounds even sounds a bit like Enigma! I hope they do more music. Generally, things always get better after the first eponimus albem.

I am wondering how original this music is. The third song sounds an awful lot like Frer a Jacqua, and the happy parts of the loud forth song sound SO MUCH like music from my favorite movie, “Dumb and Dumber.” My friend says, no, it is from the “Ren and Stimpy” show, but I don’t watch that low-brow stuff. It is so uncool to be, like, appropriating other people’s culture. This record is a bit like white boys trying to sing hip-hop, you know?

This CD is obviously from an older LP. The first four songs must be Side A. The B side has the same orchestra, but some guy singing. He kind of barks a lot and sounds like he is straining something. I think it is kind of rad to have no singing in the first four songs, but, like, maybe they could have used some words two. Otherwise we have to just figure out what it is all about on our own, you know? But this guy singing—man. He is the wurst. Like our neighbor’s dog Foofoo or something when I backed the Duster over her tail. If they had mixed these songs up among the songs in the first half--without any vocalist--it might have been better. It would have at least dilauded all this singing, and maybe given the albem some focus or theme, like Prog Rock at its best.

In summery conclusion, I wish I could like this better. I will keep trying, and maybe soon I will see what Bernard likes so much. I am sure the next albem will be better! Keep trying!
続きを読む
5人のお客様がこれが役に立ったと考えています
役に立った
フィードバックを送信中...
フィードバックをお寄せいただきありがとうございます。
申し訳ありませんが、お客様の投票の記録に失敗しました。もう一度試してください。
違反を報告
レビュー を日本語に翻訳する

Kindle Customer
5つ星のうち4.0 A First Symphony played as a first symphony
2002年6月4日にアメリカ合衆国でレビュー済み
Amazonで購入
Kubelik in this classic (though not especially good-sounding) rendition provides a Mahler First which is just that: a young man's first essay in the symphonic form. That this particular young man was a composer of genius is obvious--but Kubelik never reminds us that the "Resurrection" Symphony followed a few years later. In other words, Kubelik does not inflate this score to the proportions of Mahler's later, larger-scale works, as many conductors do (including some of the obvious "big names"). He presents the First on its own terms, giving us heaps of poetry and atmosphere, and stinting on slickness or showiness which aren't appropriate to the music anyway. (He also stints on exposition repeats, skipping the one in the second movement.)
The playing of the Bavarian Radio Symphony, who sound very much like a Czech orchestra here (Kubelik was, of course, a Czech, and you can argue that Mahler's background was as much Moravian as it was Austrian), is not blemish-free. This is especially evident through headphones. DG's sonics, while clear, can be thin and abrasive; as a result, some climaxes don't have the oomph that they really need (and for this, I blame the recording more than the conducting). If you can listen past these shortcomings, which in my opinion are not deal-breakers, you'll hear a Mahler First which is pretty close to ideal.
As for the coupling, Fish-Disk's circa-1970 "Songs of a Wayfarer" accompanied by Kubelik & Co., I would say it's a valuable adjunct to the symphony. However, either of the great baritone's other commercially available recordings (the 1950s set with Furtwangler, and a live performance in the New York Philharmonic "Mahler broadcasts" boxed set) find him on better behavior, less inclined to over-emote.
続きを読む
15人のお客様がこれが役に立ったと考えています
役に立った
フィードバックを送信中...
フィードバックをお寄せいただきありがとうございます。
申し訳ありませんが、お客様の投票の記録に失敗しました。もう一度試してください。
違反を報告
レビュー を日本語に翻訳する
その他の国際レビューを読み込む

rodboomboom
5つ星のうち5.0 Important & Powerful Mahler Rendering
2001年8月22日にアメリカ合衆国でレビュー済み
Amazonで購入
From the opening quiet, subdued Sounds of Nature on to the quickened tempo of the second of Mahler's Wayfarer Songs, so familiar and refreshing, then rising to significant climax. This is followed by the Bruckner influenced scherzo, which I very much like.
The finale bursts forth powerfully as if black, swirling storm clouds burst onto a sunny day. Here, he brings us back to the beginning in a victorious sound, which then ends in a horn dominated ending.
This time honored recording by Kubelik is passionate and up-tempo. What has been termed as "breakthrough" in this First Symphony certainly rings forth from the conductor's interpretation and this strong rendering from the Bavarian Symphony Radio Orchestra.
続きを読む
15人のお客様がこれが役に立ったと考えています
役に立った
フィードバックを送信中...
フィードバックをお寄せいただきありがとうございます。
申し訳ありませんが、お客様の投票の記録に失敗しました。もう一度試してください。
違反を報告
レビュー を日本語に翻訳する

Gary D. Warner
5つ星のうち5.0 A not-to-be-missed, stunning thriller!
2010年4月27日にアメリカ合衆国でレビュー済み
Amazonで購入
Wow. Here's another outstanding example of a fact in evidence: the difference between the so-called straightforward (i.e. dispassionate) and the expressionistic schools of Mahler interpretation, is the difference between dull and thrilling. It adds up practically, to Mahler a la two disparate personae! In other words, if you've only heard cool, temperate offerings of his symphonies, give this disc a listen and I dare say you'll meet a Mahler you never knew. And I submit (given the man's known emotionally intense nature) you'll get a more bona fide impression of him. In sum, passionate is better. Moreover, what makes this version so special is the degree of risk Kubelik takes in casting off restraint (or exaggerating the expression). Listen, for example, to how the normally precise Bavarians loosen up their execution in the third movement's passages of Jewish styled music. The subtle effect cleverly magnifies the vivid flavor of native authenticity, transporting us from the formal concert hall to the midst of a casual family festivity. Brace yourself too: it seems our maestro gave a champagne bottle a vigorous shake, because this symphony's most uproarious moments really blast off.

Symphony No. 1 was my first, and for many years, my only acquaintance with the brilliant composer. In acquiring this power-injected disc, its position as my favorite Mahler is reclaimed without a hitch (that is at least until the next time I listen to the Sixth as recorded by the Atlanta Symphony with Yoel Levi)! To be sure, a gamut of emotions is explored here. (Remember, Mahler the symphonist is always attempting to wrap his arms around the world.) But overall, with the ebullient first movement establishing the tone, this particular symphony to me is--in four words--delightfully sunny and fun. Do note also, how with the use of the cyclical form in the Finale, Mahler pulls the work together, reprising and interlacing themes from the first movement.

Sonically, the remastered 1968 recording is dazzlingly hot, which makes for considerably kicked-up immediacy (source master volume level). Likewise, I'd say it's rather bright (i.e. ample on the high end). Don't worry though, that doesn't mean it's too edgy, harsh or short on warmth. Still, if you're like me--typically preferring to set your treble control all the way up--in this case I'd suggest cranking it back a few notches. You won't miss anything. Another remastering benefit of note: It's nice, for a change, not to have to either strain or boost the volume to hear the softly opening "Frere Jacques" tune of the third movement.

While generally not an avid fan of classical song, I was quite unexpectedly taken aback by the apt coupling of the Songs of a Wayfarer (the melodic foundation of much of Symphony 1). Altogether, these are so richly and deliciously rendered with such verve by baritone, Dietrich Fischer-Dieskau (accompanied by the BRSO), that I surprisingly found myself not just appreciating but actually enjoying them. Go figure, in spite of myself.
続きを読む
5人のお客様がこれが役に立ったと考えています
役に立った
フィードバックを送信中...
フィードバックをお寄せいただきありがとうございます。
申し訳ありませんが、お客様の投票の記録に失敗しました。もう一度試してください。
違反を報告
レビュー を日本語に翻訳する

Télémaque
5つ星のうち5.0 Sublime
2008年12月29日にアメリカ合衆国でレビュー済み
Amazonで購入
As a mere classical enthusiast I can't speak to the technical achievements of this recording, the best I can say is that it transports me to another world; sometimes terrible, sometimes beautiful beyond words. It's my absolute favorite musical recording.
続きを読む
2人のお客様がこれが役に立ったと考えています
役に立った
フィードバックを送信中...
フィードバックをお寄せいただきありがとうございます。
申し訳ありませんが、お客様の投票の記録に失敗しました。もう一度試してください。
違反を報告
レビュー を日本語に翻訳する