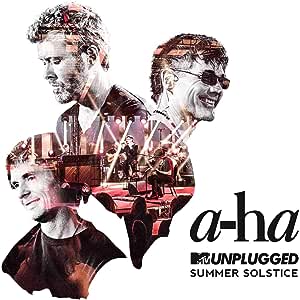 Three disc (two CD + NTSC/Region 0 DVD) edition. 2017 live release from the Norwegian trio including two new tracks. This is the first time in the band's 30 year history that they have recorded an acoustic album. The set list includes a carefully picked selection of trademark hits, tracks not often performed live and two brand new songs, 'This Is Our Home' and 'A Break In The Clouds'. Guests on the album include Alison Moyet, Ian McCulloch, and Lissie. Their Unplugged concert was filmed in Norway, each artist in the series chose a location that held a special meaning to them. a-ha's MTV Unplugged album enhances the band's credibility, they are one of a select few artists that have been chosen to appear in the series alongside acts such as Shawn Mendes.

NewFan
5つ星のうち5.0 Melancholic, beautiful album
2018年7月30日に英国でレビュー済み
Amazonで購入
I was not an a-ha fan but was drawn to this album after hearing the slowed down version of Take on Me (via YouTube). So unlike some reviewers I wasn't looking for a nostalgic experience. I hardly knew the back catalogue (except the most obvious 'hits' Taking on Me and Sun Always Shines on TV and Living Daylights), despite being of similar age to the band! So with an open mind I listened to the album several times. It is quite melancholic and on some songs the lyrics are too sentimental/MoR for my taste but perhaps that reflects the period in which they were written. However the voice of Morten Harket is pure and really works well on the more bluesy and folks-y numbers, which does take me back to my 70s listening e.g. The Doors, James Taylor, and even John Denver. The more I listen to the album, the more I like it - it is beautifully produced and showcases most of their best songs, it would seem. And being an Alison Moyet fan, it was great to hear her duet with Morten on Summer Moved On. I really hope a-ha keep writing and recording new material - my preference is for more challenging themes (e.g. as in Celice; not on this album) but I gain the impression that they prefer to keep the songs personal. Finally I appreciated the introductions between the songs: context is always good for a new listening audience.
続きを読む
5人のお客様がこれが役に立ったと考えています
違反を報告
レビュー を日本語に翻訳する

Arctic Tundra Fox
5つ星のうち5.0 Perfect acoustic renditions.
2018年1月8日に英国でレビュー済み
Amazonで購入
This is a stunning musical feast by Morten Harket, Magne Furuholmen, Paul Waaktaar-Savoy. Their acoustic renditions of some of their popular songs (both new and old) are so well crafted, you can tell they have spent a long time making sure that each musical score is spot on. If you enjoy a-ha, then this duel-CD is for you.
続きを読む
3人のお客様がこれが役に立ったと考えています
違反を報告
レビュー を日本語に翻訳する