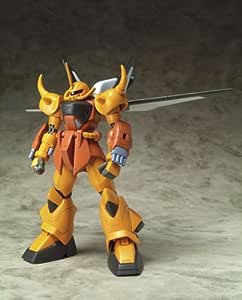 Tyler
5つ星のうち5.0 My favorite figure
2013年2月27日にアメリカ合衆国でレビュー済み
Amazonで購入
This figure was an impulse buy for me, made about the same time IIRC as I purchased  Gundam 00: Robot - The Robot Spirits - GNX-704T Ahead (5" Figure) , and while the Ahead was as awkward as a 13-year-old on a date with Scarlet Johannson, this thing has all its s*** together.

You can definately tell that the mech and figure designers were making an improvement of the original Gouf design, rather than an imitation, when you compare it to the  Gundam MSIA MS-07-3 Gouf Custom Figure  side-by-side, as I have. The two look nearly the same, but the ignited is clearly the more futuristic, modern looking one, and a shade smaller. The Gouf custom design shows its age when you try to do any sort of complex posing, proving unwieldy and stiff-looking. You can tell it wasn't designed to be a real "hands on" sort of figure, with the gun assembly ready and willing to pop off at a moments notice. The Ignited on the other hand stays together quite well, requiring signifigant effort to try to disassemble it. The sword stays in the shield without worry, and the shield will stay on whichever arm you so please to put it on.

Scai
5つ星のうち5.0 An ace among others
2011年7月23日にアメリカ合衆国でレビュー済み
Amazonで購入
Among a collection of all manner of mobile suits, the Gouf Ignited stands in a class of its own. This figure comes with multiple hands for gripping different weapons, and each one fits tightly, leaving the frustrating trend of drooping weapons behind. One issue, is that the heat whip does not fit too well into its arm slot, and will fall off with very little pressure. Even so, the shield fits perfectly on either arm. While the backpack is one of the lightest I have found so far, it can make posing him a tiny bit frustrating. With that said, this figure can assume most poses with ease, and manages to look amazing while doing so.

The durability of this figure is also impressive, as the joints remain tight enough to pose, and loose enough to enjoy moving them around. The armored skirt can be adjusted in the front, allowing the legs to bend upwards to unusual positions. The ankles also have ball joints, and can be adjusted so you can find just the right stance. I would recommend the Gouf Ignited to anyone who enjoys playing with gundams, or just posing them. Besides, the Ignited is a sweet shade of orange.
続きを読む
違反を報告
レビュー を日本語に翻訳する

Jungle Tree
5つ星のうち5.0 For the fans
2018年12月9日にアメリカ合衆国でレビュー済み
Amazonで購入
When I first saw the gouf in seed I was so in awe I love this mobile suite
続きを読む
違反を報告
レビュー を日本語に翻訳する

christopher
5つ星のうち3.0 Great figure but pretty tiny
2014年10月28日にアメリカ合衆国でレビュー済み
Amazonで購入
they should really tell you how big it is because the pictures are a bit deceptive the figure is half the size of a 1/144 scale gundam model. Aside from that the figure is very articulate and comes with a fair amount of weapons. Im half way satisfied with the purchase if it only was bigger it would get a better mark.
続きを読む
違反を報告
レビュー を日本語に翻訳する
すべてのレビューを参照します
Amazonプライム会員ならお急ぎ便、日時指定便が使い放題
さらに、映画もTV番組も見放題。200万曲が聴き放題 。クラウドに好きなだけ写真も保存可能。
> プライムを無料で試す