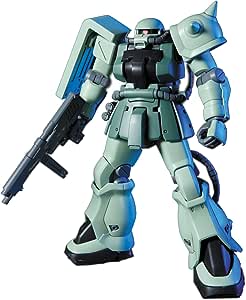 Detrius19
5つ星のうち5.0 Best 1/144 Zaku II
2018年2月1日にアメリカ合衆国でレビュー済み
スタイル: 単品Amazonで購入
This is probably my favorite iteration of the Zaku II in 1/144, even after the recent release of the Origin Zaku II C/C-5. Honestly, considering the glowing reviews for this kit already present I hardly need to add much, they've all basically covered it, but I felt like adding in my two cents anyway.

The biggest benefit to this kit is actually probably the changes in design thanks to the 0083 artists. It's a subjective matter, but I think this is the best looking version of the Zaku II. The slight design changes to areas like the knees, forearms, and elbows in particular, besides simply looking better (to me) than the previous versions also appear to have made color separation and seam line hiding much easier, though the kit designers also deserve serious credit for the way they chose to separate parts to minimize seams, especially on the legs. It's a serious testament to the designers that this 8-year-old kit still has fewer visible seam lines than the newest HG versions of the Zaku II released.

As it stands, the only three seams really visible on the suit itself are on the shoulders; one each on the box-shaped shoulders themselves, and one on the spiked left shoulder armor. The two-halved design of the forearms makes it easy to separate into two parts, and a separate gray piece for the wrist connection is a very nice, unexpected bit of color separation. The round looking hinge parts on the elbows and knees usually rendered in green on other versions are gray for the F2, which adds good color contrast, and saves some headache removing nubs from individual round pieces for those parts, since the gray can be incorporated into the actual joints. Molded detail on this kit is a lot more sparse than the Origin Zaku II, with fewer panel lines overall, which some may consider a minus, but fits the style well in my opinion. I'm a big fan of the three head versions available, especially the unique EFSF version with armor plates on the forehead, I think it looks better with that extra detail than completely smooth.

Articulation for the kit is good compared to most HG Zakus. Compared to the Origin line it only has less articulation in the shoulders (the Origin Zaku has a new "chest crunch" feature that allows them to move forward more), the feet (the Origin version has "toes" that point up slightly), and the waist (the biggest advantage of the Origin Zaku II, because the tubes that run from the backpack to the stomach are attached to the torso and not the waist). The front skirt is also designed in a way that doesn't allow the two halves to be separated, which isn't great looking, but doesn't hinder movement.

I'm also a fan of the weapons included in this kit. The 90mm gun looks great, and I think it has the best looking version of the classic Zaku 120mm machine gun, with the under-slung grenade launcher and M4 style stock. The heat hawk has some nice looking understated design tweaks, and the leg-mounted missile launchers are a great inclusion, though a small notch in the legs to hold them in place wouldn't have hurt. As others have noted, this kit doesn't come with it's own version of the Zaku bazooka. This doesn't really disappoint me since I don't really care for it, but it should be noted that it's hands are compatible with most HG versions of the bazooka, including the Origin and Thunderbolt versions. In fact, all Origin Zaku weapons, especially including the huge anti-ship rifle will work very well with this kit.

Basically, it's really hard to be disappointed with this kit. If you like the Zaku II, even if you already have other versions, you should get this one.
続きを読む
8人のお客様がこれが役に立ったと考えています
違反を報告
レビュー を日本語に翻訳する