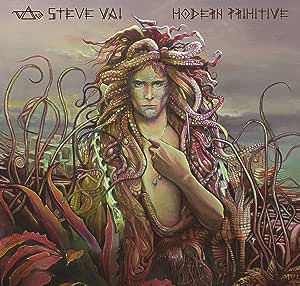 Pink and Blows Over は3部作の大作だが各パートでカラーが違い飽きさせない。パート1はディズニーのおとぎ話のような不思議な美しさ。秀逸な声音の女性ボーカルが引き込む。パート2は妖しくも美しい音の流れで奇妙な世界を想像させる。パート3はガラリと変わり、ジャズっぽいギターが自由自在に弾きまくられる、心地よい展開。

Eric Beaty, Author of the SMART FOCUS series
5つ星のうち5.0 A Great Return to Mr. Vai's "Modern Primitive" Roots
2016年8月26日 - (Amazon.com)
形式: CDAmazonで購入
I'm a hardcore Steve Vai fan, and I was super excited to finally hear some new material by the legendary guitarist. At first, I was a bit disappointed it wasn't the final installment of his trilogy series "Real Illusions," but when I heard the magic that Vai had put together instead with "Modern Primitive," it was a great throwback to his early days, with a bit of incredible mixing and tones. (I love the way he uses a Step Filter in "The Lost Chord." I've always wondered how to use that effect.)

Obviously, "Passion and Warfare" is a great treat. I have the regular version. But the 25th Anniversary edition also includes a completely new remastering of the tracks (if I'm not mistaken) and a few bonus tracks, two of which have already been previously released as "VaiTunes" ("As Above," and "So Below"). But the real treat for me was "Modern Primitive."

It's nice to hear what went on in Mr. Vai's head between the "Flexible" and "P&W" days musically. Some of it sounds very similar to his most recent works ("Dark Matter" is very similar to "Gravity Storm," for example). And the killer intro bass groove in "Mighty Messengers" (one of my favorite tracks on the album) is recorded by none other than the legendary bassist Stuart Hamm, the actual bassist for Vai's albums "Flexible," "P&W," and played in an obscure band with Vai called The Classified.

In "Upanishads," we finally get to hear what Vai described as a tapping exercise that originally inspired his song "Building A Church" from his "Real Illusions: Reflections" album; although, you have to listen very closely to hear the tapping sounds since it doesn't really sound like a guitar at all, more like a synthesized instrument, which it may, in fact, be. And in "Pink and Blows Over"—especially part 2 of the song—we get to see a rare glimpse into Mr. Vai's scat singing talents, which are both refreshing and absolutely impressive on every level.

"No Pockets" (another of my favorites) sounds just like a tune from Steve's Frank Zappa days. In fact, I think he mentions in the liner notes that the song was written during his stint in the Frank Zappa band. "Never Forever" is another great tune, reminding me of "The Moon and I" from Steve's most recent foray into the "Real Illusions" world, "The Story of Light."

So many great tracks, so little time to discuss them all. Besides, words don't suffice when the music speaks for itself.
続きを読む
4人のお客様がこれが役に立ったと考えています
レビュー を日本語に翻訳する

Mark Haggarty
5つ星のうち5.0 The greatest "guitar" album of all-time
2016年7月28日 - (Amazon.com)
形式: CDAmazonで購入
The greatest "guitar" album of all-time!! What a wonderful 25th anniversary treatment. Usually an artist might add a song or three, but a whole other album's worth of music!?!?! How cool is that?! Passion and Warfare has four extra songs, let alone the whole album's worth of music of "Modern Primitive." If you have a previous version of PAW you will still want to get this new one. The extra songs run the gambit of Steve's mind and speaking as someone who loves his "Flex-Able" and "Flex-Able Leftovers" it's awesome to hear his inner songs come to life. I cannot wait to see the tour as he will be playing PAW in it's entirety for the first time ever!
続きを読む
7人のお客様がこれが役に立ったと考えています
レビュー を日本語に翻訳する

S. Popa
5つ星のうち5.0 Brilliance at work
2016年10月12日 - (Amazon.com)
形式: CDAmazonで購入
well, I thought that 'Passion...' sounded very well already, I enjoyed it on cassette tape, and on '90 CD. Yet, noticeable improvements are to be found on this remastering, like better separation and quieter background. But, the real gem here is 'Modern Primitive', mr. Vai's recollection (aka reworking) some of his '80s unreleased and unrecorded tracks. Dedicated to the almighty Frank Zappa, this LP is a marvel: a continuous flow of music, it seems like one large musical piece. And nice to have once again Devin Townsend, Mike Mangini and all the other contributors to mr. Vai music catalogue. We are so lucky to have this masterpiece revealed just now: this is how the music should sound. An excellent package, containing 2 of the best LPs of the contemporary music.
続きを読む
4人のお客様がこれが役に立ったと考えています
レビュー を日本語に翻訳する

C. Tozzi
5つ星のうち5.0 Will the real Steve Vai fans please stand up?!?!?!?
2016年6月28日 - (Amazon.com)
形式: CDAmazonで購入
Excuse me as I go off here but do realize that this review comes from a man whose first music notes heard are from Frank Zappas Studio Tan album, combined with the images and sounds of Mr Stevie Vai thrusting his guitar next to my balloon kicking hip thrusting bonafide badass childhood hero David Lee Roth. My first live show to see Steve himself along with Joe Satriani and Eric Johnson in 1997@The G3 Concert in San Diego sealed it. I'm a big Steve Vai fan.

As most Steve Vai fans are due to the nature of the music, I am a musician and guitar guy who loves all kinds of music and especially guitar centric instrumental jams! No need to list them all, but in this genre I think of Joe Satriani, John 5, Animals as Leaders, Paul Gilbert, Eric Johnson, and of course Steve Vai. To me, these names represent "instrumental rock" in the best and most satisfying way.

Which brings up my first and greatest point to which has been unspoken so far. The album being reviewed here "Modern Primitive" is not just a out of the vault and off the shelf, remastered and here you go bs album. The way it's done from a musicians standpoint is so cool as the whole album is parts that were recently recorded, and many parts kept from original recordings from the early 80's. Many songs have a mix of both, some all old and some all new using the same orchestration Steve and his fellow musical cohorts came up with back in the day. Players from Steve's old bands I didn't even know about like The Classified(which includes one of the best bass players here on planet earth Mr Stu Hamm!), and Vai regulars we all love like guitarist Dave Weiner, drummer Jeremy Colson, and multi talented Mike Kineally all add flair style to this already eccentric in concept album. Yet Vai puts it together to feel as it's one cohesive thing put together in the same 3 month recording session. And what he put together is what we all expected from our Vai guy.

We all know "Passion and Warfare". It's Satriani's "Surfing with the Alien". Metallica's "Black" album. It should sound great and the extra tracks will be cool but I'm here for new music. The experience. The thrill of the new. And this is great. Cliched as it's sold as, it does truly sound in between "Flex-Able" and "Passion and Warfare". But if you know Vai's stuff, he amazingly adds a little bit of real wacky tobaccy from "Flex-Able Leftovers" and some truly amazing pop song styling he used on songs in "Alien Love Secrets". It's a true pleasure. A new beast. I really dig it. A new album by the former mentioned "instrumental artists" can be a tired exercise sometimes, even at the level of those phenomenal musicians. This was a nice surprise and inspiring as a guy who enjoys playing music, but loves listening to music. Via at his wacky but matured a little. It's dipped in a 80's time warp yet up to date. Put on your favorite headphones and let the "Modern Primitive" experience began.

Some reviews mention too many "Vai vocals" and we all chuckle if you have followed Mr Vai long enough. The album opener "Bop" starts off and you would agree with that comment. Total wacky tobaccy chants and moans and whatever Steve loves and does. But the other singers that take off here take those "Vai vocals" to another level. Devin Townsend adds his voice and some extra writing contributions on "The Lost Chord", making this a striking song. Going in another direction, Steve pens his ultimate pop song in "And We Are One" sharing a call and response duet with some beautiful female voiced artists. "Lights are On" and "No Pockets" have those big driving riffs guitar fans love. And what would a Vai album be without the "What the f were you thinking about lyrically bro?!?!" on "Mighty Messenger"!!! I could go on and on but ultimately you need to listen yourself....I mean it's freakin Steve Vai!!!!