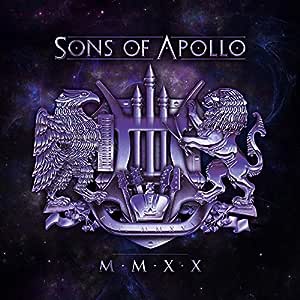 JSwank
5つ星のうち5.0 Much Improved Over Debut
2020年1月18日 - (Amazon.com)
Amazonで購入
Sons Of Apollo are back with more instrumentally dense progressive metal. Derik Sherinian and Mike Portnoy have their influence written all over this music, but with MMXX – their second effort – there is a sense that melody and song structure make a greater impact. More cohesive as a group coming off their live performances last year, these songs flow well, and Jeff Scott Soto’s voice just “feels” a more natural fit this time around. That said, there is no denying the overly indulgent nature of the music. Fans of ‘90s progressive metal will rejoice as this music represents – in some ways – the direction most fans of early Dream Theater wished the band would progress.

There is a greater diversity as well this time around – immediately apparent from the first 4 tracks. Sherinian’s keys play an even greater role – with some epic moments like the opening, middle and closing segments to “King Of Delusion,” and Portnoy has dialed back the speed and technicality for a more ‘70’s prog style which perfectly complements the retro-progressive songwriting going on here. This song is absolutely killer – simultaneously showcasing both technical and creative skills. “Fall To Ascend” follows – easily one of the heaviest tracks – with plenty of power, speed, melody and crunch. I love that Portnoy is spreading melody around the kit instead of just attempting to power/speed his way through these songs. Thal “Bumblefoot” is a master on these songs – technically brilliant, his guitar leads and solos simply shred. And Sheehan’s bass guitar is killer as well – just listen to some of the middle sections of “Resurrection Day.” I love the creativity on the epic track “New World Today.” The opening segment is essentially a Thal guitar solo accompanied by some very cool synths. But then the song builds into a juggernaut of prog rock/metal power and passion.

The second CD contains the instrumental mixes (as if the vocals are irrelevant to prog shred) with the highlights being the a cappella excerpts. Just listen to these tracks if you doubt Soto’s ability to deliver vocally – his voice just commands. Despite the heavy reverb, these tracks are captivating – his performance on “Desolate July” probably my favorite. There is an error in my CD booklet – the song titles in the lyric section are missing to the first five songs – but otherwise the triple gate digi is typical of most of these multi-CD releases of late from Inside Out.

Sons Of Apollo have more than adequately answered the call – these songs represent significant improvements over the debut. My only hesitation with this band? There is still a gap between the vocal/melodic metal side of the music and the technical wizardry, but with MMXX they have closed that gap quite significantly when compared to the debut.
続きを読む
9人のお客様がこれが役に立ったと考えています
レビュー を日本語に翻訳する

Kevin Dudley
5つ星のうち5.0 A noticeable improvement over their 2017 debut
2020年1月18日 - (Amazon.com)
Amazonで購入
Sons of Apollo are a progressive metal supergroup consisting of Jeff Scott Soto (vocals), Ron "Bumblefoot" Thal (guitar), Derek Sherenian (keyboards), Billy Sheenan (bass), and Mike Portnoy (drums). They released their debut album "Psychotic Symphony" in 2017. While their debut garnered a lot of acclaim, I found the album to be solid but uninspired and derivative throughout. There was definitely potential within the band so I hoped that their sophomore release would deliver where I felt the debuft was lacking in multiple areas.

The band released their second album "MMXX" on January 17, 2020. While sonically speaking it sounds very similar to their debut, I immediately noticed a large improvement in songwriting, arrangements, and band chemistry which makes "MMXX" a terrific follow up release. There is also more variety in the tracks themselves.

Standout tracks for me are "King of Delusion" which features some very nice classical piano flourishes, "Fall to Ascend" which features an unrelenting pace, and the epic closing track "New World Today" which clocks in just shy of 16 minutes in length. There is not a weak track on this release in my opinion and the band overall sound much more in synch and comfortable with each other this time out. Jeff Scott Soto in particular delivers a superb vocal performance that sounds more nuanced and expressive on "MMXX". My only slightly quibble is that the lyrics can get just a wee bit hokey at times but that is to be expected with progressive music in general.

If you were a huge fan of Sons of Apollo's debut, then I think you will be mightily impressed with their sophomore release "MMXX". If you were like me and felt underwhelmed by the debut, "MMXX" should prove to be a nice improvement in all categories.

Highly recommended! (The 2 disc limited edition CD release contains instrumental and a capella mixes of the album on disc 2 by the way.)
続きを読む
4人のお客様がこれが役に立ったと考えています
レビュー を日本語に翻訳する

Chris Kaiser
5つ星のうち5.0 Powerful at every level
2020年1月18日 - (Amazon.com)
Amazonで購入
From the first song this CD kicks you in the face...in a good way. This is heavy, powerful and melodic. Jeff Scott Soto is as impressive vocally as any musician you put him with. I hadn't listened to much of Ron Thal until SOA but he is amazing. Some bands with this much talent just don't work out but this is fantastic music and musicianship at its best.
続きを読む
2人のお客様がこれが役に立ったと考えています
レビュー を日本語に翻訳する

MAX
5つ星のうち5.0 Stellar!!!
2020年1月18日 - (Amazon.com)
Amazonで購入
In a real world, SOA would be huge! Simply amazing album. Even better than the first one which was crazy awesome!
続きを読む
1人のお客様がこれが役に立ったと考えています
レビュー を日本語に翻訳する