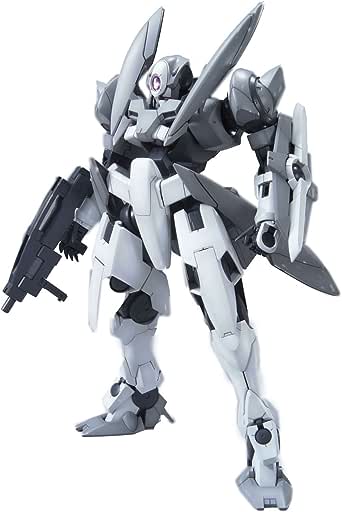 FatGunpla
5つ星のうち3.0 Very Unstable needs a stand.
2018年8月18日にアメリカ合衆国でレビュー済み
Amazonで購入
The Mg-GN-X is one of the best looking kits from the OO universe. This guy looks amazing with an LED unit in the chest. What gets to me though is all the loose parts. The toes are loose, the fins on the crotch and chest have a habit of falling off. Also my Gn-x always falls over when you walk by the kit, Not cool at all.
続きを読む

M. Lewis
5つ星のうち4.0 Solid kit with a few issues
2016年11月4日にアメリカ合衆国でレビュー済み
Amazonで購入
A decent kit. It suffers from the standard OO Small Foot Syndrome, but if you're used to OO kits then you know about this. It really needs an Action Base to pose decently. The color scheme is a bit dreary, but nothing some paint can't fix. The panel detail isn't bad, and the mechanism for the GN Drive insertion is cool. It accepts a standard Bandai MG LED if you want to add one. The beam rifle is kind of meh, although the long rifle setup looks interesting. Personally I feel the long barrel beam rifle needs some work -- the connection mechanism of the long barrel to the base rifle is too tight on mine, and removing the long barrel pulls off the front of the rifle. Nothing some glue can't fix, but still. There are also issues with the GN particle generators on the chest and hips -- they don't attach terribly well and tend to be loose. The hands have those GN Spike knuckles which do not make for great finger articulation. Not much undergating, and about half of the sprues are ABS, so be prepared for a lot of nitpicky nub removal.

Generally, though, as long as you're willing to put in a little work with painting (or at least panel lining and topcoating) this is a solid kit with an original design. It doesn't look terribly Gundam-ish, if you're a purist, but the aesthetics are not at all bad. If you're into kitbashing, this could be modded into a GN-XII, XIII, or Advanced GN-X without a great deal of trouble.
続きを読む
4人のお客様がこれが役に立ったと考えています
役に立った
フィードバックを送信中...
フィードバックをお寄せいただきありがとうございます。
申し訳ありませんが、お客様の投票の記録に失敗しました。もう一度試してください。
違反を報告
レビュー を日本語に翻訳する

I_dig_giant_robots
5つ星のうち4.0 A mono-eyed kit that doesn't look like all the rest!*
2014年12月4日にアメリカ合衆国でレビュー済み
Amazonで購入
*Technically it has five eyes. Maybe? Is the big circular one a fifth eye? I have no idea.
Note: this was my first kit from Gundam 00, so I'm not familiar with the design philosophy differences between it and Universal Century. Meaning, this kit could be incredibly derivative for all I know. But to a newcomer to 00, I loved it.

Pros:
- Unique look, at least on my shelf. Those four fin thingies over the shoulders and under the arms really make it stand out. The head is also very cool, and the way the beam sabers are stored (in the upper thigh!) is something I've never seen before.
- Fun to build. I really liked how the torso is built around the GN Drive; it's a solid design, and a giant chunk of it can be removed without any hassle. That's a neat achievement.
- I'm a big fan of the rifle design (once you put on the long barrel attachment, anyway).
- Rifle connects to the forearm to keep it steady; since the hands don't hold anything very securely this is a great feature. The connector can also rotate quite a bit, so the rifle doesn't have to be parallel with the arm if you don't want it to be.
- Fairly flexible. The arms are a bit limited at the shoulder, and the under-the-arm fins tend to get in the way of the leg armor a lot, but you can still get a good kneeling pose if you get them just right.
- Interesting cockpit design. It's literally a cockpit, if you catch my drift.

Cons:
- Color scheme is a bit boring. The purple on the head is nice, but the purple on the chest and GN Drive are a lot harder to see without lighting them up with an LED, meaning that for the most part this is a very gray kit. You have a few shades of gray and white to work with, but I for one am going to repaint this into something a little more appealing.
- GN Drive supports two LED units, but the kit doesn't come with any. Plus, from what I can tell most of the LED units out there are green, red, or yellow. I'm not sure how much that would clash with the purple (haven't tried yet), but it might be a problem.
- The hands are just silly looking. Each finger has a claw extending from the knuckle, but they aren't like Wolverine claws or anything; they aren't parallel to the wrist, making it look like each hand has ten fingers, five on top of another five. It also makes it look like when the GN-X is holding something, the fingers aren't able to close around it all the way (even though they can).
- Shield falls off very easily. Not sure why; it connects to an identical port to the rifle, and the rifle doesn't seem to have any problems staying on.
- The over-the-shoulder fins are pretty loose. Not loose enough to flop all over the place, but loose enough to be a hassle. The under-the-arm fins are also a bit of a pain to position, but at least they stay on better.

Overall? I liked it (mostly because of its unique looks), but maybe that's just because I'm a newcomer to Gundam 00. I'm also looking forward to repainting it; I have a feeling a white/black/gold color scheme would work nicely...
続きを読む
4人のお客様がこれが役に立ったと考えています
役に立った
フィードバックを送信中...
フィードバックをお寄せいただきありがとうございます。
申し訳ありませんが、お客様の投票の記録に失敗しました。もう一度試してください。
違反を報告
レビュー を日本語に翻訳する

NB
5つ星のうち5.0 Mg gn-x is a great underdog grunt kit!
2015年11月6日にアメリカ合衆国でレビュー済み
Amazonで購入
Mg gn-x is a great underdog grunt kit! It may get blown up a lot, but the mobile suit is very unique-looking and its nice to have a master grade of something other than hero gundams for the 00 series. The colours are nice and the model has a great amount of detail when finished. It has around 10 runners worth of parts and the assembly was enjoyable. The gn-x has a decent amount of accessories, including 2 beam sabers, beam rifle with long barrel attachment, gn shield with subtle gimmick and a gn drive that can be stored in the back of the mobile suit, or separately on a special display component. The kit doesn't include an LED although the gn drive can support one, Very few master grades actually come with an LED, so this is not surprising. An extra level of detail can be added by using the stickers and dry transfer decals included in the kit. You can even customize the gn-x with a roman numeral from 1-30. When finished, it poses well although the insectoid side skirts tend to fall off occasionally. Also, the ankle joints are a bit loose, which causes the kit to fall over if it isn't balanced properly. These minor issues aside, the gn-x was a pleasure to put together and a great choice for someone looking for a master grade that stands out from the usual, yellow v-fin mobile suits.
続きを読む
役に立った
フィードバックを送信中...
フィードバックをお寄せいただきありがとうございます。
申し訳ありませんが、お客様の投票の記録に失敗しました。もう一度試してください。
違反を報告
レビュー を日本語に翻訳する
その他の国際レビューを読み込む

Juergen Reinacher
5つ星のうち4.0 The GN-X, a fantastic Master Grade.
2012年1月29日にアメリカ合衆国でレビュー済み
Amazonで購入
The GNX-603T GN-X from Gundam 00, Seasons 1 and 2 was a fantastic new design, with very sleek curves, and a very eye-catching appearance. In the anime itself, the GN-X (pronounced: Jinx, or Jinks) was a high performance, swift design that could take on Gundam type mobile suits.

On to the model itself:

This kit was a real joy to build, and a joy to see that it got the Master Grade treatment. Master grades have a larger scale, and better sense of detail than High Grades. Though these can be more expensive, the Master Grades (or MGs) are really much better overall. This kit was, for the most part, an easy one, save an annoying plate in the head section, which I just remedied with modeler's cement. The rest of the build went smoothly, and only took me around 2 to 3 hours in one session. The real highlights of this kit are the GN core and all the trans parts which fit really well into the color scheme. The greyish/white looks fantastic with the darker grey, and the little bits of light grey. The GN Beam rifle is great, but the GN Long Rifle (simply the GN Beam Rifle with an extended barrel and sight) is really the icing on the cake for the weapons. The two beam sabers are nice, but tend to fall out of the hands, even with the pegs. Securing the sabers with the fingers can easily solve this problem though, so it doesn't really matter. Now then, the main problem. The most annoying part of this kit is only minor, the problem being that it has weight issues (probably obvious with those flashy skirts jutting out) which cause it to fall over a lot. My solution was to purchase an action stand, which also allows this kit to be posed in a lot more epic ways. Besides that, this kit was really an excellent addition to 00's Master Grade line.

Sam P.
5つ星のうち5.0 Just buy it. You won't be disappointed.
2019年7月23日にアメリカ合衆国でレビュー済み
Amazonで購入
This kit looks so cool when complete that I can overlook it's flaws. Like others have said, the arms are weak and an action base is mandatory.
続きを読む
役に立った
フィードバックを送信中...
フィードバックをお寄せいただきありがとうございます。
申し訳ありませんが、お客様の投票の記録に失敗しました。もう一度試してください。
違反を報告
レビュー を日本語に翻訳する

angel triana
5つ星のうち2.0 Damaged parts during shipping
2018年7月28日にアメリカ合衆国でレビュー済み
Amazonで購入
Showed up earlier then expected. The box was damaged when I open the box some of the pieces of the kit were damaged as well, to the point where I can't even assemble part of the model unless I buy another kit.
続きを読む
役に立った
フィードバックを送信中...
フィードバックをお寄せいただきありがとうございます。
申し訳ありませんが、お客様の投票の記録に失敗しました。もう一度試してください。
違反を報告
レビュー を日本語に翻訳する

Will
5つ星のうち4.0 One of a Kind
2011年7月16日にアメリカ合衆国でレビュー済み
Amazonで購入
Though I don't watch the Gundam shows, I wanted this in my collection due to it's unique shape and break from the "typical" gundam model shapes. Its sleek and agile design truely makes it stand out in any line-up, and makes painting it really easy since you don't have to worry about panel lines or small articulations on the body! As a Bandai MG series, the GN-X is very posable and comes with it own set of decals (foil stickers and dry transfer decal). Also, the GN-X is compatible with the LED light (sold separately) that lights up its center body as part of the Gundam 00 series model kits.
続きを読む
1人のお客様がこれが役に立ったと考えています
役に立った
フィードバックを送信中...
フィードバックをお寄せいただきありがとうございます。
申し訳ありませんが、お客様の投票の記録に失敗しました。もう一度試してください。
違反を報告
レビュー を日本語に翻訳する

Hyun Kang
5つ星のうち3.0 Very fun to build but unstable.
2012年10月6日にアメリカ合衆国でレビュー済み
Amazonで購入
I have to say before going into its cons, I had a lot of fun building this model.
Also this is slightly bigger then other 1/100 scale models I think.
The complexity of the model is at its price range and the over finshed look was very clean, stylish.
Yet the model fails to make the whole structure stable.
it will stand if you try hard but the feet just aren't strong enough to carry the weight of the
upper body.
I had to use the cement on some of the joints to have it secured.
overall a good fun to build model kit with little bits of flaws.
続きを読む
2人のお客様がこれが役に立ったと考えています
役に立った
フィードバックを送信中...
フィードバックをお寄せいただきありがとうございます。
申し訳ありませんが、お客様の投票の記録に失敗しました。もう一度試してください。
違反を報告
レビュー を日本語に翻訳する