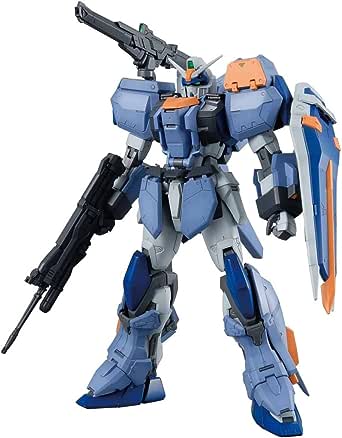 Matt M
5つ星のうち4.0 It’s a fantastic kit, but...
2018年11月13日に英国でレビュー済み
Amazonで購入
As a big Gundam SEED fan, I jumped at the chance to get the Duel Gundam delivered through Prime, and I don’t regret it at all. Like the other SEED MG kits the Duel Gundam has excellent articulation thanks to the inner frame and sleek design and a decent selection of weapons and gimmicks, and is nicely detailed to boot, presenting a bunch of panel lining opportunities.

I assume for most people the selling point for this kit would be the Duel’s Assault Shroud gimmick/accessory. The Assault Shroud is easy to assemble (as is the rest of the kit) and for the most part, has a very simple but effective way of attaching to the Gundam itself. However, there is one piece that absolutely refuses to stay put, and that is the extra armor that attaches to the Duel’s waist unit. The front, specifically. Not only is it tricky to line the tabs up with the slots they’re intended to fit into, but they simply don’t fit. With all of the Assault Shroud attached, at the slightest movement you’ll be seeing the front waist armor falling off, which makes posing the Duel a far more tedious task than it should be. This may seem like a minor gripe for some, but for me, the Assault Shroud is a major part of the kit and when parts simply don’t work as intended, it’s unacceptable.
Additionally, the Gae Bolg launcher has trouble fitting in the Duel’s hands. It’s too loose, but it’s not a problem when the launcher is resting on the Gundam’s shoulder.

For markings you have a decent selection of stickers and dry transfer decals, as well as the necessary foil stickers for the cameras.
続きを読む

Paul Coleman
5つ星のうち5.0 Great quality kit as usual from Bandai
2015年4月18日に英国でレビュー済み
Amazonで購入
Great quality kit as usual from Bandai, and loads of pieces to keep you busy (14 components just in the head). Instructions are clear enough to build without being able to read Japanese, as is usually the case with Bandai product. Another stellar kit which is sure to look good once built.
続きを読む
違反を報告
レビュー を日本語に翻訳する