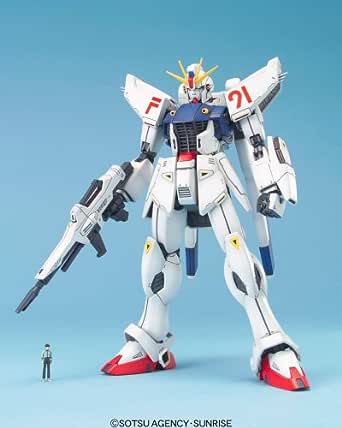 xenobane
5つ星のうち5.0 A small yet very detailed kit, very high cost/value ratio.
2017年5月10日にカナダでレビュー済み
Amazonで購入
This could be one of the hidden gems in the MG line, despite its smaller size it still has full inner frame, and is also the first MG kit that does not use polycup. What's more worth the cost is the inclusion of the display stand in the shape of the Rafflesia (the antagonist's mobile armor), with tentacles and pilot figure included.

Consider the kit is from 2006, it might not be as 'fresh' as the newer ones, but it is still considered a 'modern' MG (with full inner frame, as some of the earlier ones only have partial inner frame).

Detail-wise, it does not have that sharp feeling the new Metal Build version offers, but its own streamlined feel is very true to the original design. The color separation is fairly well done; there are lots of small colored parts to bring out the contrast. For perfectionists some additional touch-ups are still required on some small areas such as: the vulcans on the head, shield projector's outlets, radiators on the waist and ankle, as well as the edges of the cooling fins on the shoulders.

Movement wise it starts as a fairly stiff kit, due to the lack of polycup, but the joints might become loose if played too much. The unit is a bit back-heavy when the V.S.B.Rs are in their default position, but thanks to the stiff joints it can stand just fine without putting on the stand.

The unit's cockpit can be opened to reveal the pilot, and is very well detailed; you can even make out individual screens on the inside of the cockpit. The beam shield can be 'activated' by attaching the included special effect part, it looks great when deployed but it might also interfere with the shoulder armor. There is a spare removable shield projector stored in the right side skirt armor, which is true to the movie and design. two beam sabers are store in the left armor skirt, each also comes with their own beam effect part.

The weapon selections are great for a small-sized kit; a beam rifle with its own inner frame, a very nice looking beam launcher (aka beam bazooka) with lots of panel lines, the aforementioned beam sabers, as well as the iconic V.S.B.Rs that are fully extendable/retractable.

The unit's face mask can be opened to reveal the 'wrinkle face' as depicted in the movie (the HGUC version can only achieve this through head swap).

Overall the kit is excellent for the price and the value it offers, there are however a few cons about it: the head design makes it difficult to turn freely to the sides and look up. When removing/putting on the helmet, or opening/closing the face guard, the eye sticker might get scratched. As mentioned before, the beam shield's special effect part might interfere with shoulder armor.

Despite the downs the kit is very worth the cost; not many kit these days can include a stand as unique as the F91's. If you are considering buying the F91, this MG version is the best choice; it offers greater detail than the HGUC version, and is much cheaper than the Metal Build version. It is no surprise that this kit is one of the top 50 MGs chosen by Bandai fans, it really is worth every penny.
続きを読む
役に立った
フィードバックを送信中...
フィードバックをお寄せいただきありがとうございます。
申し訳ありませんが、お客様の投票の記録に失敗しました。もう一度試してください。
違反を報告
レビュー を日本語に翻訳する

Evan
5つ星のうち4.0 Is he some kind of monster!?
2016年10月11日にアメリカ合衆国でレビュー済み
Amazonで購入
The MG Gundam F91 is a marvel of engineering, managing to deliver an almost 1:1 representation of the titular mobile suit of "Mobile Suit Gundam F91."

Compared to its fellows, the F91 is one of the shortest Gundams, smaller than even the original RX-78-2. With this in mind, that this kit was able to include all of the gimmicks associated with the mobile suit, from the beam shield (though the mechanism is a bit loose), to the VSBR system, and even the spare beam shield and beam sabers in the hipskirts. Further, the kits small size is compensated for by the inclusion of an action base in the image of the Raflessia, weapons on wires and all.

Unfortunately, this means that the kit loses out on some structural integrity. The arms can give some trouble, especially at the elbows (where the lower arm connect to the biceps) and the armor on the knees are rather loose, often popping off if one is not careful when bending the knees (though they are just as easily reattached).

Overall, this is a very good kit, brought down only by the inevitable consequences of squeezing Master Grade quality into such a small package. Highly recommended.
続きを読む

Build was pretty easy and does not require poly caps. Leg joints are not robust and pieces fall off with ease.

Kindle Customer
5つ星のうち5.0 A wonderful addition to a gunpla collection
2018年9月13日にアメリカ合衆国でレビュー済み
Amazonで購入
This is another excellent Master Grade model from one of the least known stories in the Gundam Universe. It comes with it's own action base that's based on what I can only call a Mobile Armor that the model is "fighting."
続きを読む
役に立った
フィードバックを送信中...
フィードバックをお寄せいただきありがとうございます。
申し訳ありませんが、お客様の投票の記録に失敗しました。もう一度試してください。
違反を報告
レビュー を日本語に翻訳する

IRENE ESPIRITU
5つ星のうち5.0 Awesome master grade
2015年2月16日にアメリカ合衆国でレビュー済み
Amazonで購入
Awesome master grade. Being an older master grade it rivals the modern ones. Excellent articulation, and the weapons are really detailed, especially the beam bazooka. The VSBRs look great and the overall detail of the Gundam is great. Only thing about this kit that i dislike is that the armor pieces fall off at times, only when you play with it. This kit also comes with an action base and at this low price point, this kit more than worth its price. It's a small kit but the amount of work put into here is undeniable. I'd recommend this kit to anyone.
続きを読む
役に立った
フィードバックを送信中...
フィードバックをお寄せいただきありがとうございます。
申し訳ありませんが、お客様の投票の記録に失敗しました。もう一度試してください。
違反を報告
レビュー を日本語に翻訳する

Hasasuki
5つ星のうち4.0 Gundam F91 Master Grade.
2016年10月20日にアメリカ合衆国でレビュー済み
Amazonで購入
Gundam F91 is one of my favorite designs in the line of Gundams! The details of this kit are great! You have to panel line to bring them out though. There are no poly-caps on this kit. There are pieces that combine to act like poly-caps. This kit is sturdy when moving things around, so be careful not to apply too much force. Articulation is decent. You get a few stickers, and good amount of dry transfers, I think that's what they are. This will be my first time putting them on. The side-skirts hold the device that forms the shield, and the other side skirt can hold the beam saber handles. You can peg both of them in place. My only grip is that it's hard to get the side skirts closed. Also there are small yellow parts for the diamond design and vents. Two of mine keep falling off. I believe it's because I filed them down too much. *Be very careful when constructing the guns for the back. The gun has a long connector with a slide groove on it. Also, there is a bad nub at the tip. You will have to cut away this nub, sand it down, etc because I broke this piece while trying to put in the small grey slide stopper piece. A stand is included with this kit, in the form of the Lagressia. Overall, it's a good kit, and I highly recommend to any Gundam fans,
続きを読む
役に立った
フィードバックを送信中...
フィードバックをお寄せいただきありがとうございます。
申し訳ありませんが、お客様の投票の記録に失敗しました。もう一度試してください。
違反を報告
レビュー を日本語に翻訳する