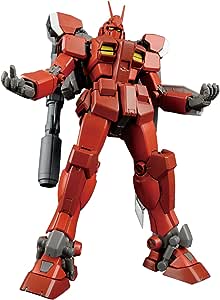 James W.
5つ星のうち4.0 The gold standard for mid-cost Master Grades
2016年12月9日にアメリカ合衆国でレビュー済み
Amazonで購入
I'm in the middle of building this kit currently, but as a seasoned builder I can feel confident in completing a review at this time. The images in the product page are all prototypes and really don't do this kit the proper amount of justice. Compared to other Master Grade kits I've built, here are some pros and cons of the Red Warrior.

Pros:
- Internal Skeleton. The frame of this kit has an insanely wide range of motion. The shoulder joints can swing forward allowing for more cross-body poses with the arms on this kit, which is good because it comes with a lot of...
- Weapons. This kit has a tool for every occasion. Rifles, machine gun, bazooka and two sword attachments for the rifles, for short and long blades. There is a short and long beam saber attachment for the right arm as well. There are hidden missile launchers built into the chest, flank skirt, and shield also. Save the Dendrobium and Meteor, you won't find another kit with as many weapons per square inch as this kit, which is especially impressive when you consider...
- A place for everything, and everything in it's place. Despite having such a heavy arsenal, this kit can carry the vast majority of it without being overly encumbered. This is made possible by a backpack that can neatly carry up to three of it's large weapons vertically, and out of the way on the backside of the kit, without having a significant effect on the unit's balance. The weapons are stored on telescoping arms (Think MG Jesta's shield) which can be brought around to the side of the kit for the unit to grasp in hand, which is infinitely more feasible than earlier kits with back mounted armaments, in which the kit would have to perform a movement it is incapable of, to retrieve their payload from their backside.
- Hands. This kit while it does not have true to life fully jointed fingers like more expensive kits (ie. Sazabi ver. Ka), It is halfway there. It builds on the old MG 2.0 standard (non jointed thumb, non jointed index, middle-ring-pinky non jointed and fused) and makes it more articulated by giving the index, middle, ring, and pinky fingers an additional point of articulation. The three non index fingers remain fused at the base, but if you're handy with a hobby knife, it doesn't have to stay that way. The thumb is still unbending though, but that's alright. I'd rather have an unbending thumb than pay 2000 yen more for this kit to have fully articulated hands. This is an infinite improvement over the lazy and flimsy interchangeable hand parts that have been popular as of late (Endless Waltz/Seed Reboot kits)

Cons:
Stickers? - As I mentioned before, the finished kit has much more detail than the product images listed here which are the prototype pictures Bandai released prior to the kit's release. There are a fair number of decals you can apply to make the kit more eye-grabbing. My woe with them is they are plain old stickers, not water slide decals or dry-transfer decals (which In my opinion look the best). This leaves areas of discoloration around the decal, which while not visible from a distance, can be easily seen up close, or in high resolution photos, like the one I provided. I'm sort of a snob on this because instead of a war-machine, your kit truly looks like a toy with these (which admittedly, it is).
Awkward shoulders - This kit has a twin pair of thrusters, which in their resting state, sit on top pf the shoulders pointing to the left and right of the unit. They can be adjusted to point backwards or forwards as well. When the thrusters are in their default position, the arms of the unit cannot be positioned vertically upward, the thrusters have to be pointed backwards or forwards to achieve this. The thrusters are also attached to a peg attached to the shoulder joint, so when the arm moves forward to do a cross-body pose, the thruster moves with it, and if it is in a backward or forward facing position, it looks incredibly strange.

For a mid-priced Master Grade kit, you will be hard pressed to get more bang for your buck than you do with this kit. The number of weapons and gimmicks in this model are incredibly high compared to other kits at the same price. Highly recommended for intermediate and higher level builders.
続きを読む

Kenny
5つ星のうち5.0 Great kit worth the money.
2016年2月23日にアメリカ合衆国でレビュー済み
Amazonで購入
Wow this kit is amazing. Pretty much if u snip it from the runners correctly there is no need to to touch up or paint the figure. Its really good out of box build. It come with a good inner frame. Comes with 4-6 accessories. Very pose-able due to the inner frame. Allot of gimmicky parts that open and move. There is 2 tone in red 1 darker red and the other plain red. Looks very close to the anime. Can stand by itself, but need a pose stand if trying to do harder or advance pose.
続きを読む
1人のお客様がこれが役に立ったと考えています
役に立った
フィードバックを送信中...
フィードバックをお寄せいただきありがとうございます。
申し訳ありませんが、お客様の投票の記録に失敗しました。もう一度試してください。
違反を報告
レビュー を日本語に翻訳する

FaustoJR
5つ星のうち5.0 Fantastic kit!
2015年11月10日にアメリカ合衆国でレビュー済み
Amazonで購入
The kit looks amazing! Te red is very deep and has great shades that vary throughout the kit. My only gripe is the weapons that don't have great detail but nothing a little custom can fix.
続きを読む
役に立った
フィードバックを送信中...
フィードバックをお寄せいただきありがとうございます。
申し訳ありませんが、お客様の投票の記録に失敗しました。もう一度試してください。
違反を報告
レビュー を日本語に翻訳する

wilnashon
5つ星のうち5.0 2nd favorite kit!
2016年5月2日にアメリカ合衆国でレビュー済み
Amazonで購入
Love it. Never was the type to buy multiples of the same kit. At first I thought it would be just another rx-78 kit. Red Warrior does deliver a lot more. It was a much different build inside out. Simple 2.0 version aesthetics with non redundant weaponry and awesome cosmetics. Any level gunpla fan can enjoy.
続きを読む
役に立った
フィードバックを送信中...
フィードバックをお寄せいただきありがとうございます。
申し訳ありませんが、お客様の投票の記録に失敗しました。もう一度試してください。
違反を報告
レビュー を日本語に翻訳する