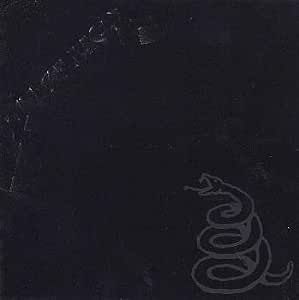 Japanese edition of their multi-platinum 1991 smash albumthat spent four consecutive weeks at #1, with the bonustrack 'So What'. 13 tracks, also featuring the top 40 hits'Enter Sandman', 'The Unforgiven' & 'Nothing Else Matters'.A Sony Records release.

Mandrek Larl
5つ星のうち5.0 It's not what I expected, I'm not a metal fan but I may have been converted ...
2018年9月20日に英国でレビュー済み
Amazonで購入
Confession time, I am not, and never have been a big heavy metal fan, so some of you may not want to read any further as I am not really qualified to judge where Metallica's eponymous Metallica album fits in the catalogue of Metallica's music let alone the broad canon of heavy metal. However, I do have a number of heavy metal albums, particularly NWOBHM albums from the likes of Judas Priest, Iron Maiden, and Def Leppard, but even so would still never describe myself as a heavy metal fan; I do though know what I like.

So after hearing a Metallica track on one of Johnnie Walker's Monday evening shows on Radio 2, absolutely no idea which track, but it hit the right spot and persuaded me to dip my toe in the Metallica waters, and what deep waters they are with ten studio albums to choose from. So, deciding to take the safe way out, I have started with their biggest seller, the eponymous "black album", well 16m sales in the US can't all be wrong (note there are many things that 16m and more Americans can be wrong about!).

And you know what, I am enjoying this album because it isn't the thrash metal heads-down-and-let's-hope-we-all-make-it-to-the-finish-line-together type of metal I had expected it to be, which frankly does little for me. Instead it is a collection of 12 tuneful moderately paced well-constructed well-mixed songs where you can actually hear the instruments and the lyrics.

The album kicks-off with the truly excellent "Enter Sandman", and along the way the particular highlights for me include "Wherever I May Roam" and the ballad "Nothing Else Matters". OK there are a couple of tracks that don't quite hit the spot for me but they aren't far off, so overall this metal album gets 5 stars from a non-metal fan.
続きを読む
9人のお客様がこれが役に立ったと考えています
違反を報告
レビュー を日本語に翻訳する

Gopher
5つ星のうち5.0 Excellent vinyl - definitely no skipping
2018年3月8日に英国でレビュー済み
Amazonで購入
Blackened (Vinyl Reissue) - excellent lp - absolutely no jumping. Not being a fan of 'Thrash Metal' I had mostly ignored Metallica records. Then I came across a mix of Metallica (the Black Album) used to demo and interesting (quite expensive) amplifier and decided to reconsider.
Definitely liked 'the Black Album' BUT rather concerned by the 1-star reviews as regards skipping/needle-jumping.
Now, I'm not saying faulty pressings don't exist, - I once returned an LP to the store for a replacement - they checked every copy in stock only to find every one was pressed off-centre.
A bit of investigation (discogs.com is quite useful) I discovered this re-issue was cut by Chris Bellman at Bernie Grundman Mastering (one of the best) and probably same as the 2008 (Warner Music Group) issue - the Blackened Recordings jacket shows 'manufactured by Warner Music group', I also found these were pressed at Pallas (regarded by some as the best pressing plant in the world) I decided to order this and very happy that I did.

So why do some have problems and write 'bad' reviews? Certainly there are places where the drum really thumps, add to that it's the type of music you want to play LOUD and this could cause needle to jump/skip. However, with good mastering and pressing, it seems more likely the Turntable/Arm/Cartridge set-up may need some adjustment (assuming the arm provides for this).
Digging a bit beneath the surface of a few 1-star reviews I found -
one reviewer who still had 'skipping' problems with 'Blackened' release though less the earlier 2008 (EU) release. Although the same re-master, the 2008 (EU) was on the Universal label and pressed at GZ Vinyl (The Warner label was US release) so it's unlikely to be the same 'bad pressing' problem from two different places.
Another reviewer, having returned this lp due to 'skipping', then returned his music system due to 'skipping' problems ( a subsequent 'bad' review). It was very much a budget (all-in-one & incl. speakers) system - he probably spent as much for this LP as the manufacturer spent on the turntable part of the system Sadly such systems will have limitations. I do sympathize with him though, it's very much a case of "we don't know what we don't know" when you first 'get into vinyl'.
続きを読む
5人のお客様がこれが役に立ったと考えています
違反を報告
レビュー を日本語に翻訳する

ClifB
5つ星のうち5.0 Excellent music and unusually good recording/pressing
2019年8月22日に英国でレビュー済み
Amazonで購入
Metal is not a type of music I especially like and I don’t have much of it in my collection, but this is without doubt an excellent album. All tracks are good and several are standouts.

Often this type of music is badly compressed and sounds mediocre, but this is very dynamic with excellent sound from top to bottom and quite a thrill ride, with all elements very clear on a good vinyl front end. The pressing is excellent, super quiet and free of pops, ticks, channel noise or other nasties. Being on 2 discs with only 3 tracks per side was a good choice and clearly helps sound quality.
続きを読む
違反を報告
レビュー を日本語に翻訳する

tclf
5つ星のうち3.0 best metallica album ever. beware of packaging
2020年10月30日に英国でレビュー済み
Amazonで購入
package came without any protection, just a plastic bag, no card to protect the album cover. had to exchange to another of the same, record came a little bent and the cover was damaged on the corners.

Joanna Fleming
5つ星のうち5.0 I'm not a heavy metal fan am I? (unless you count the tuba)
2009年12月22日に英国でレビュー済み
Amazonで購入
I used to think that heavy metal music was just noise for the sake of noise coupled with dubious lyrics ... until a friend sent me a link to a cello quartet playing 'Unforgiven'. I started searching for Christian heavy metal groups since I realised that the style of music did appeal to me after all - but found I had to come back to Metallica - superior composition and superior musicianship all round. While the lyrics and feeling behind the songs can dwell on some of the more negative aspects of human nature - what better way to explore this than through music? I do not like listening to 'Sad but true' - it makes me feel uncomfortable! My favourites are 'Unforgiven' and 'Nothing Else Matters' - I also like 'Enter Sand man' but I find much to interest, stimulate and inspire me in all the songs in the 'Black Album' - listening closely I appreciate the composition of the songs underneath the 'noise' and I love the drums (somewhat manic at times!) - playing a bass instrument I feel the drums are one of my closest allies so I am always tuning in to interesting rhythms when I listen to music.