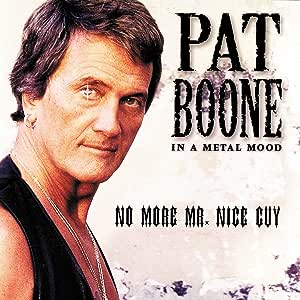 IN A METAL MOOD: NO MORE MR. NICE GUY

Monty Python have got nothing on Pat Boone. You want absurd, this is the pinnacle. No comedy writer in his/her dreams could have dreamt up anything even half as stupid. The mere idea of Pat Boone, Mr. Squeaky Clean himself, (ahem) crooning heavy metal tunes is bad enough, but it gets so much worse. Big name arrangers were brought in to take crunchy power chords and squealing guitar solos and turn them into jazzy riffs and big band horn blasts. Even a few of the artists whose material is covered make guest appearances. Guitarist Ritchie Blackmore plugs in on "Smoke on the Water," while vocalist Ronnie James Dio gives a shout out on his band's "Holy Diver." This musical "idiodyssey" actually works a few times. I'm not immune to the kitsch value that the swingin' versions of AC/DC's "It's a Long Way to the Top (If You Wanna Rock 'n' Roll)," Hendrix's "The Wind Cries Mary," or Ozzy Osbourne's "Crazy Train" provide. These songs almost sound like they were written for this kind of overblown, slick swing. Very scary. As for the rest, well, let's just say that aside from the fact that they don't really work too well in this format, Boone just ends up sort of speaking the lyrics and sounding completely goofy. If that's not comedy enough for you, surely the extensive liner notes explaining (rationalizing?) why Boone felt the need to make this record are the topper. I liked this guy a lot better when he was pals with the Parents' Music Resource Center. Can't wait for In a Grunge Mood--sometime in the 21st century. --Adem Tepedelen

Victor
5つ星のうち5.0 In a metal mood: Pat Boone - No more Mr. Nice guy!
2011年6月9日に英国でレビュー済み
Amazonで購入
For years Pat Boone was the Mr Nice guy of the music world, the acceptable face of Rock'n'Roll to white middle class America. But in this little gem he has decided to play completely against that type and produce something quite original.

Taking a set of well known heavy rock hits and reworking them in his own style, this is a set of classic tunes that anyone will recognise, but with an interesting and original twist. The style is largely lounge jazz with louche arrangements. Boone's vocals are similarly Tony Bennett in style, but with a raw edge and an impassioned feel where necessary. It's a great combination.

As with Hayseed Dixie's bluegrass takes on classic Rock, I am always surprised at how malleable these tunes are. The songs were written so well that they really stand up to being rearranged and restyled. Boone has made some good selections and a genuinely interesting and worthwhile album has resulted. It also has a strong sense of fun, which really helps!

Albert B. Barger
5つ星のうち5.0 Besides making "cool" people crazy, this is actually quite a good album
2019年6月24日にアメリカ合衆国でレビュー済み
Amazonで購入
I've never much cared about Pat Boone one way or another. He's mostly sort of a minor punch line for jokes about being lame-o. I originally bought this shortly after it came out most of 20 years ago mostly for the sake of carrying it around to show all the hip people I know. Naturally, most of them blanched at the very idea without having any interest in actually hearing what Pat Boone would do with Led Zeppelin and Ozzy.

Actually, it turned out to be a really good album that I have listened to quite a bit over the years. Basically, Pat Boone's voice was pretty so-so by this time, but the big band arrangements are great. At risk of being ridiculed, I like the arrangements and thus the recordings of several of these songs better than the original ROCK versions.
続きを読む
3人のお客様がこれが役に立ったと考えています
違反を報告
レビュー を日本語に翻訳する

rmac1117
5つ星のうち4.0 Jazz-Razz Taffy Apple Fandango
2018年3月16日にアメリカ合衆国でレビュー済み
Amazonで購入
This obscure disc was brought to my attention by a reference in one of Joel Whitburn's Record Research chart books. Curious, had to try it out after researching comments from other Amazonians & finding a $2.18 deal for it (thanx again seller!).
Not a White-Buck-"Conservative" moralizing, nor mock metal, nor "Love Letters in the Sand" do-doo-de-doo, but a well organized vocal jazz project. The jazz band here is EXCELLENT, and a lot of folks went into the making of this project. See the liner notes, which also feature Pat's own views of the recording sessions, and the choices of songs themselves. Myself, I don't think it is hippy-drippy or crappy-sappy, as others have suggested. Rather, it's a quite entertaining and offbeat listen. I was maybe expecting something like Tiny Tim's Disco version of "Coming to Take Me Away, Ha-Ha" (no joke, found that on You Tube), but the arrangements here are Straight, Without Being Narrow. Ballads and blasters alike, it's a listen for diversity among everything else when looking for a change, but more than adequate in its own right.
One song, "Love Hurts" actually sounds more like Dot-Records-Era Pat, because mainly because it's a similar-time hit by the Everly Brothers, but is included here because everyone now associates it with Nazareth.
続きを読む
1人のお客様がこれが役に立ったと考えています
違反を報告
レビュー を日本語に翻訳する

Anthony Dickerson
5つ星のうち5.0 Awesome!
2019年7月26日にアメリカ合衆国でレビュー済み
Amazonで購入
If you don't have this in your cd collection you're really missing out! I love Pat's voice and am familiar with his older recordings. Don't care for his politics, but that's ok. He's a great singer as is his daughter. :)
続きを読む
違反を報告
レビュー を日本語に翻訳する
すべてのレビューを参照します
Amazonプライム会員ならお急ぎ便、日時指定便が使い放題
さらに、映画もTV番組も見放題。200万曲が聴き放題 。クラウドに好きなだけ写真も保存可能。
> プライムを無料で試す